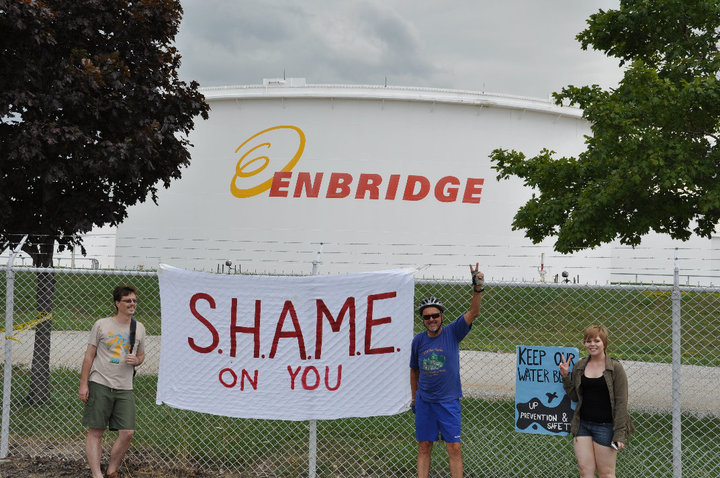 In this interview, Zak Nicholls shares his experiences with struggles and impacts around Sarnia's Chemical Valley.

Zak speaks about his role in campaigning alongside others in Sarnia and Aamjiwnaang. He talks about local pollution impacts, complacency from government officials and the general public, local indigenous struggles, obstacles in the way of uncovering information about petro-chemical industry operations, and some other related issues.

Since our conversation, Aamjiwnaang reserve community members have launched a lawsuit against petro-chemical industries. and their government allies.

This interview was recorded in the evening after an Enbridge protest, and a local toxic tour through Sarnia and Aamjiwnaang -- a few weeks before the recent lawsuit.

During the toxic tour, Zak led a few of us through chemical valley, and through off-site areas which are impacted by industry, on a daily basis. Zak has lived in Sarnia for more than thirty years, and the information and on-the-ground stories that he has to offer seem to be limitless.

The rally earlier that day was along the St. Clair river, where we gathered to raise concerns about how Enbridge has been managing and neglecting their oil pipelines. We were near a damaged Enbridge pipeline, beside the native reserve. Aamjiwnaang residents were actively involved in the rally.  Photos are online here and here.

We were protesting alongside the same pipeline that recently had ruptured in Kalamazoo, Michigan. Well over 3.5 million barrels of oil were spilled there -- along the way to Sarnia. The Enbridge protest in Sarnia was part of ongoing campaigning from S.H.A.M.E.: Sarnia’s Hometown Activist Movement Emerging.

Zak also ran in the Sarnia mayoral race this fall. He was challenging Mike Bradley, an incumbent who has held the position since 1988. His mainstream media profile outside of Sarnia helped him to win the election. for his eighth term, as of this October.

On the day that we recorded the interview, Nicole and I were in Sarnia on behalf of another southwestern Ontario group called Climate Justice London. Less than a week after the Enbridge rally in Sarnia, our London group began a regional pipeline campaign and research project.