Minutes from the Annual General Meeting

Minutes from the Annual General Meeting 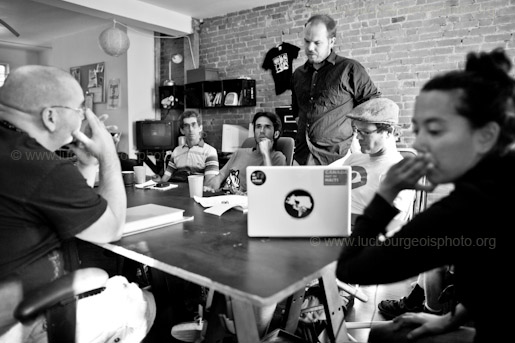 Present on the call:

-Tracy Glynn (Contributung Member on the board)

asks that if members have suggestions on engaging writers to please contact her at tracy@jatam.org

-Harjap Grewal (Reader member on the board) says that purpose of sitting on board is to be representative on behalf of readers, and have reader issues followed up for example, content that want to see, lay out of web site. To contact him with suggestions, email harjap@resist.ca

-looking to reduce reliance on grants

-accounting fee $2400, which is a lot considering the revenue coming in and therefore wanting to pass special resolution, to have compiled instead which costs over $1000.

-printing costs have gone up, because of increasing subscriptions

Launch of the Halifax Media Co-op

-presentations to labour unions, groups, indiv: what is lacking in your media

get word out, focus to build up sustainers, get folks writing

-in one year have increased 25 sustainers, now pay 1 journalist and 1 organizer

-upcoming features: militarization of Dalhousie and the state of midwifery in Nova Scotia.

-have done 3 skill shares to bring more folks in

-now focusing on content, and will return to push to reach 50 new sustainers

-soft launch on media co-op in June, 5 or 6 presentations

result: more folks accessing and posting content on the site

-some features on the co-op were picked up by other news eg: Tyee

-everywhere the co-ops will be set up, are different

-May held the membership drive

-In April sent out email notice and some mailouts: asked people to become sustaining members (1 each day was goal) and asked current sustainers to recruit more folks.

-Yves donated BlackBook and we gave those out as prizes

-there was also a contributor survey:  Contributors generally felt that rhw relationship wth editors was positive, and said the response time for articles was too long.  They also want to be paid.  Results will be complied

-Harjap suggested following up with specific organizations that want to become suscribing members.

-What is meant with “lighten up”?  Moira: The paper is visually dense and content dense, more positive, less super dense stories, more humor to balance

- we asked a former doner to fund the position for the first year.   Hired Amy Miller to work with the membership, stay in contact, and build up our sustainer base.  Sustainers have increased week by week.   Also have made modifications to database etc so that people kept in contact. kept track of better

Questions: Is Amy’s position going to be renewed?  She started in early summer. It is a year-long position, and then we hope that we have enough $ to continue to expand and continue that work.

-still need a title… help if you have one.

-trying to take in feedback from surveys and online form at mediacoop.ca in terms of putting it together.

-received over 12 pitches many from people who had never written for the Dominion before.

Question: Pat: doing work around child-trafficking, and hoping that the issue is followed up on.  Pointed to contribute suggestion on the Vancouver media co-op site

Anyone thought of comparing what happened in Montreal?

Dawn: what will be in the issue will be limited because of space: there will be someone looking at police infiltrating/attacking alternative media in Montreal 1976.  BUT it is very important that folks make suggestions, do the research and add the content through the Vancouver media co-op web site.

5. Special Resolution not to appoint an auditor for the financial year of 2009-2010.

Due to the high cost of having the Dominion's books audited, members of the Dominion Newspaper Cooperative resolve not to appoint an auditor for the financial year of 2009/2010.

Hillary: Would like to clarify that the $2400 spent in the previous financial year was not to have the books audited  but somewhere between audited and compiled.  Auditing is done by an accountant and it is an accountability check.  Attempt to be as transparent as possible but want to use the money to pay journalists instead.  The books are being compiled (part of process for taxes) and this does catch inconsistencies

Question: are the books under NS juristiction

Hillary: the Dominion is a national cooperative, federally regulated

Tim: It is very common for non-profits are not audited b/c of the cost so this process is more commonly used to ensure that there is generally the paper work to show how/where $ is being spent.

Direction of print/ web based

Ben: developing video component on site so that there is possibility of creating video reporting.  There is a video working group working on this as well

starting with locals, and looking at setting up more but now turing focus to start working groups that may or may not be part of a co-op local

-philosphical base is pushing the ideas

-how does co-operative media look different

-being funded by readers rather than advertisers is key