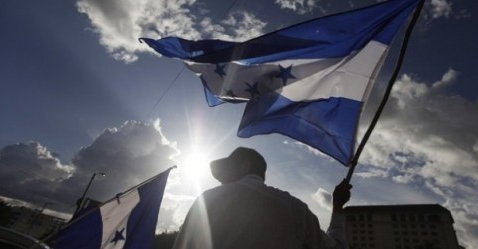 "On June 28th, 2009, democratically-elected President Manuel Zelaya was abducted from his home by the militairy and exiled to Costa Rica. This coup has been widely condemned by multiple international organizations, including the Organization of American States, the European Union and the United Nations; and no government in the world has recognized the de facto regime - installed after the coup - as legitimate". A broad-based popular movement under the banner of the "National Front Againts the Coup" has sustained a well-organized resistance for the past two months demanding the reinstatement of President Zelaya and broader social reforms.

See following reports from the Latin American Solidarity Network (LASN) currently on the ground in Honduras documenting the resistance to the coup:

Close to 5,000 people gathered in front of the Universidad Pedagogica Nacional Francisco Morazan (UPNFM) to demand the return of President Manuel Zelaya. As they gathered one could feel the carnival type atmosphere with people dancing, blowing whistles and singing. As the march made its way down the main throughway, the high level organization of the resistance movement was obvious. The university students quickly mobilized into action to maintain security. On foot and on motorcycles they drove at the head of the march and weaved in and out of protestors ensuring that no confrontation or violence took place with police. The streets were lined with heavily armed police and military protecting western-type fast food establishments. One could see university students checking individual press credentials ensuring there were no "infiltrators" trying to cause trouble. We are told that this is standard protocol as the  de-facto regime consistently tries to infiltrtate the peaceful protests to instigate violence.

As leaders of the march began their speeches on the street, suddenly a woman took the microphone and started to yell. One could quickly sense the desperation and fear in her voice..."I need help...they are going to take him prisoner...they are going to take him away!" One of the leaders went on to explain that she was denouncing what just happened because her and her partner, who had just gone to the bank to make a transition, were identified as supporters of president Manuel Zelaya and they detained her partner. The woman grabbed the microphone and again started to yell:

"We are not afraid, we are not afraid. You can register our car because we are citizens and in this country if there's freedom of expression then they should let us freely express it...as long as Manuel Zelaya is not here there will never be peace...let it be known there can be no peace!".

With that the resistance movement sprang into action. A call  was put out for a group to help and accompany her back to where her partner was being detained. Immediately, about 25 people rallied to her side marching back with her. There they were joined by many more people who with their collective voice demanding justice, managed to free him on the spot. As the woman and her partner got into their car, it was surrounded by the crowd who escorted them. As they drove away, the crowd in a triumphant voice chanted "el pueblo unido jamas sera vencido" (the people united will never be defeated).

In front of the Sindicato de Trabajadores de la Industria de las Bebidas y Similares (Workers Union of the Industry of Beverage and Similar Industries), we were reminded by Bertha Caceres from the Consejo de Organizaciones Populares e Indigenas de Honduras-COPINH (Council of Popular and Indigenous Organizations of Honduras) why the struggle continues:

"For us this is part of our continued historic struggle. It's not just recently that we have been demanding a participatory democracy but rather we have been struggling for this for a long time. This is why the role of black, indigenous and rural campesina (peasant) women has been so strong in defence of and for the reinstatement of the President Manuel Zelaya. We are not just demanding the reinstatement of President Manuel Zelaya, we are also proposing the refounding of our country. One of those steps is the installation of a national constitutional  assembly, but not just any one but one that is of the people and democratic."