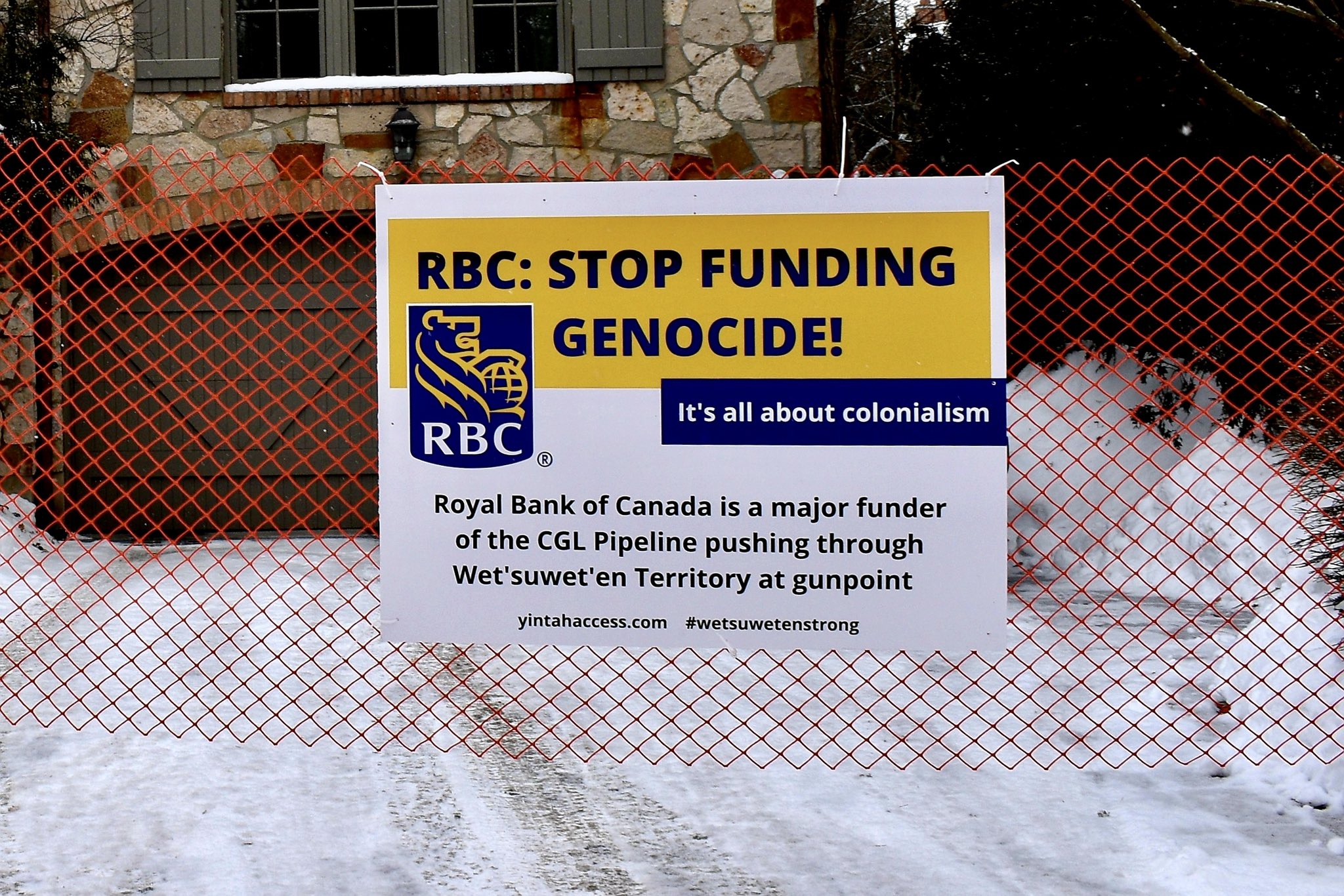 Activists set up fake construction sites at two Toronto houses, with signs warning of the Coastal GasLink pipeline's violations of Wet'suwet'en sovereignty and consent, on the morning of Monday, January 24.

The houses were those of TC Energy Board Chair Siim Vanaselja, in the wealthy midtown neighbourhood of Rosedale, and Royal Bank of Canada (RBC) executive Doug Guzman's house on a quiet North Toronto street near Bayview and Blythwood. 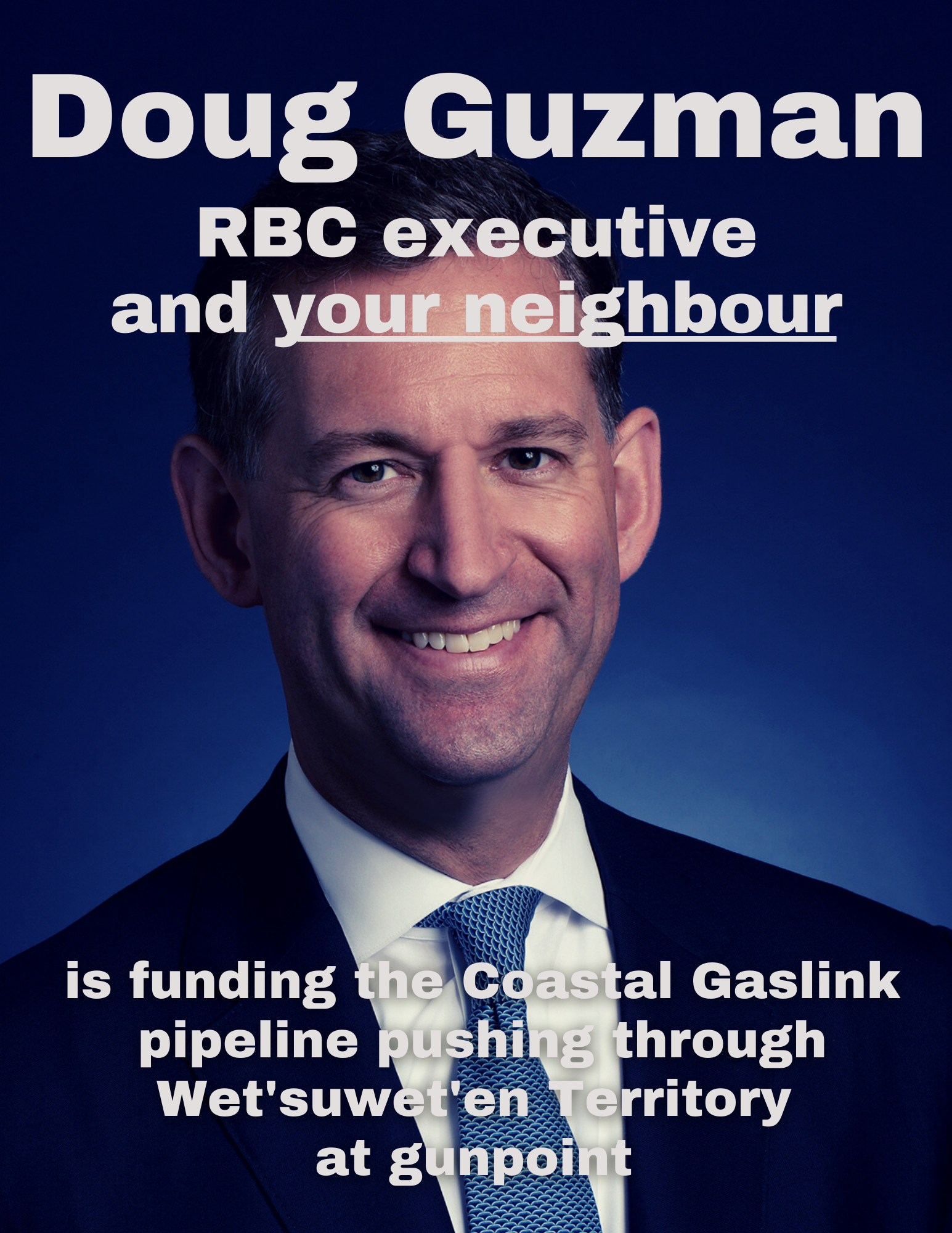 The Wet'suwet'en traditional government does not consent to the project, and has repeatedly evicted the pipeline company and its workers from their territory in northern British Columbia. The first eviction was in January 2020. The company has responded with colonial court injunctions, and the RCMP has invaded the unceded territory at gunpoint, most recently in November 2021, making arrests of Indigenous land defenders and journalists. The RCMP maintains a very active presence in the region. 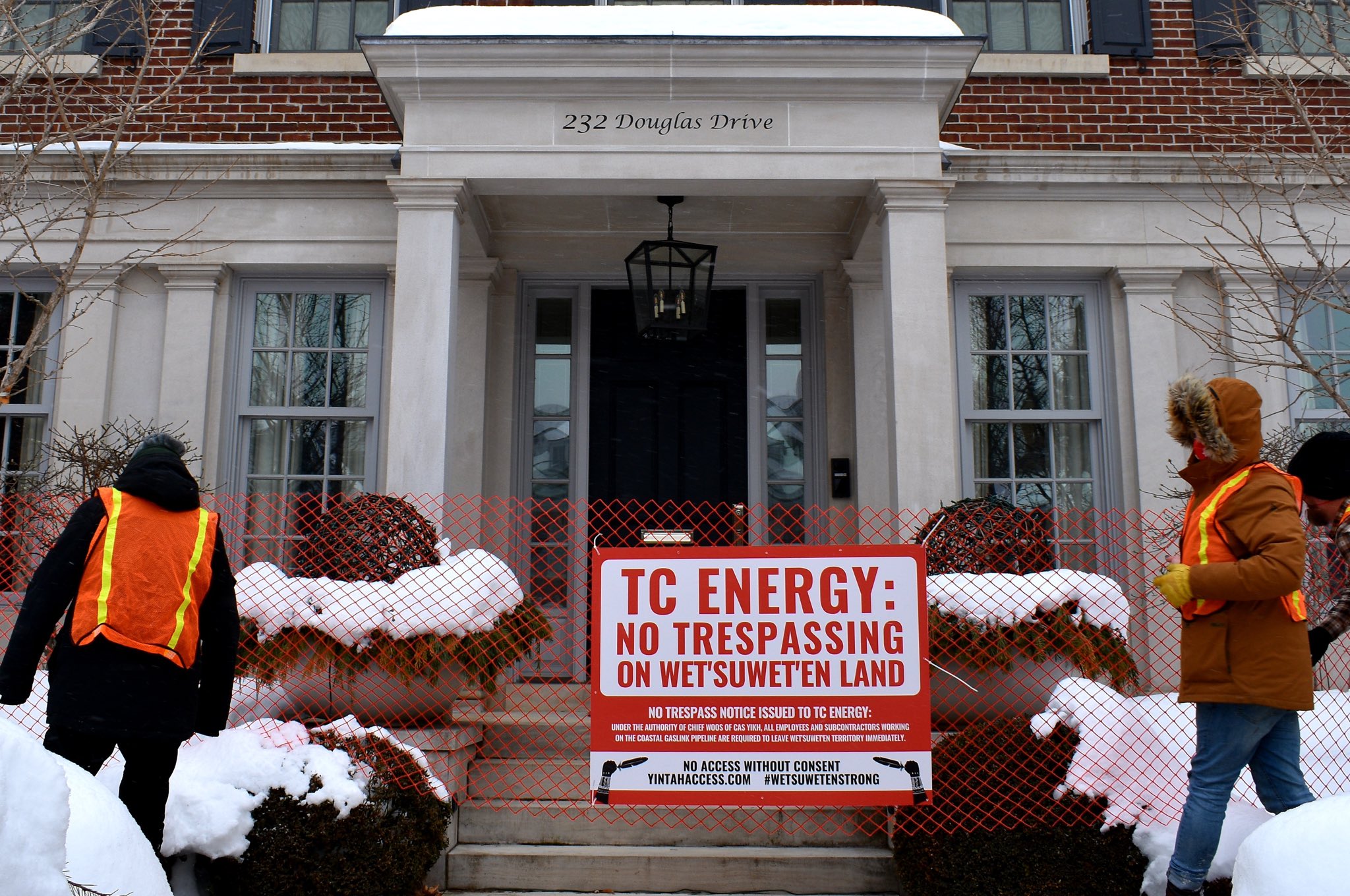 According to World BEYOND War Canada, which supported the action, those participating in the actions set up fake construction sites warning of the dangers of what Vanaselja and Guzman are enabling in their powerful, well-paid positions. Those present also distributed flyers to nearby houses with photos of the two men and text reading, “Your neighbour is pushing the Coastal Gaslink pipeline through Wet’suwet’en Territory at gunpoint.” Posters with similar messaging were put up on poles in the area. 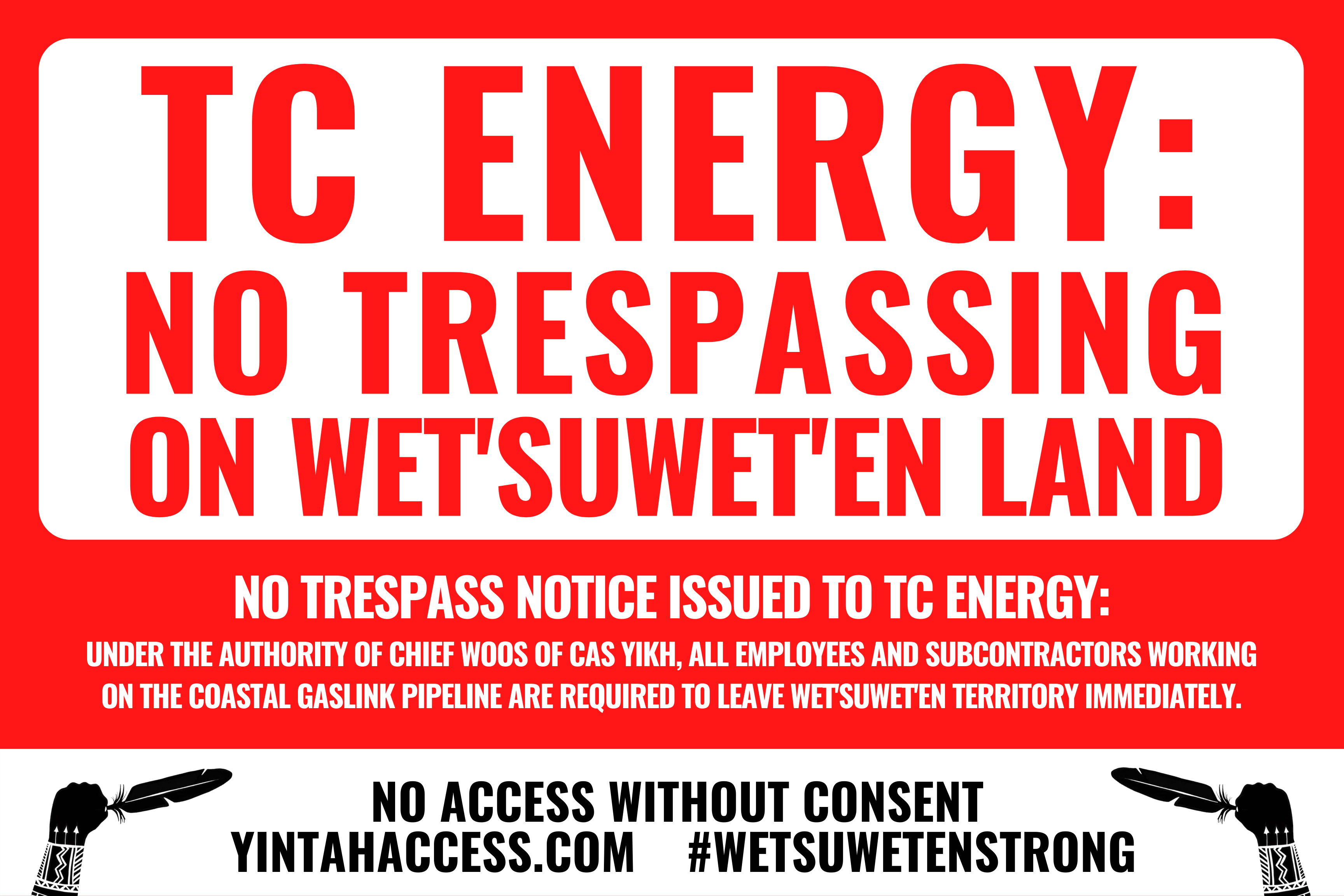 Wet’suwet’en Land Defender Eve Saint reflects on the violence her relations are facing at the hands of the RCMP, “The home of my sister, Jocelyn Alec, was burned down and bulldozed after she was violently arrested and removed at gunpoint," Saint says in a statement released by World BEYOND War Canada. “[My sister] is the daughter of Hereditary Chief Woos, and her home was on our traditional, unceded Wet’suwet’en territory.”

The action on Monday was carried out without incident from the police, and Doug Guzman briefly stepped outside, but there was limited interaction with those present, according to World BEYOND War Canada. The fake construction sites appear to have been taken down quickly. Within an hour of World BEYOND War Canada's first post on Twitter about the actions at 1:13 pm, the Media Co-op went by Vanaselja's house in Rosedale and everything was down, except one poster on a nearby pole. 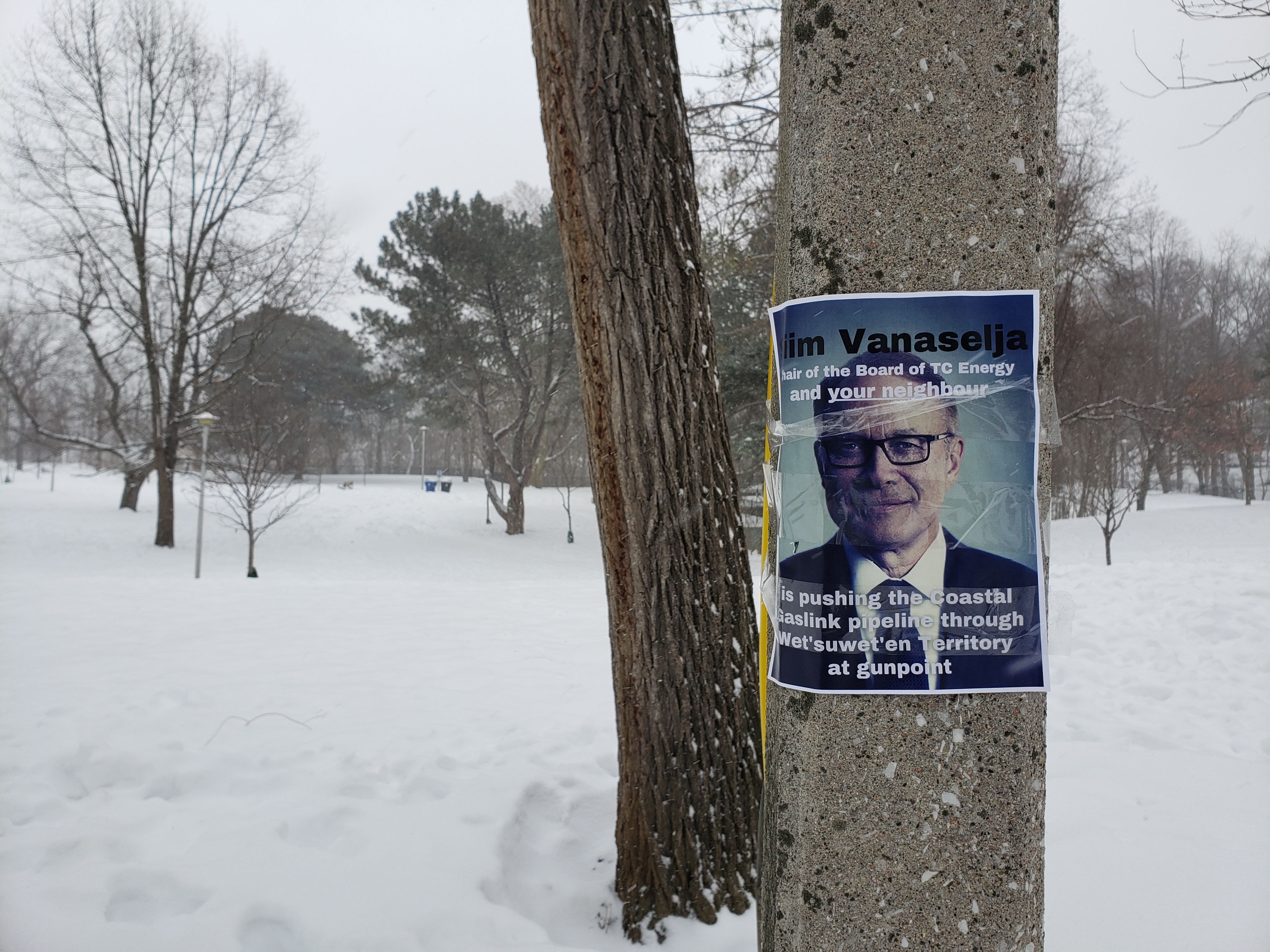 Rachel Small, Canada Organizer for World BEYOND War Canada, said, “Today supporters took action to bring the message home to Siim Vanaselja and Doug Guzman, two men leading companies that are orchestrating, funding, and profiting off of the violent colonial invasion of unceded Wet’suwet’en territory. The decisions they make are directly linked to the militarized violence that the RCMP has carried out on Wet’suwet’en people over the past several months to shove through the Coastal Gaslink pipeline at gunpoint.”

Vanaselja's house was previously targeted in 2019, also over violations of Wet'suwet'en rights and sovereignty related to Coastal GasLink. RBC, Canada's largest bank, has been targeted by activists recently in Toronto and other locations over its financing of the pipeline, and fossil fuel infrastructure investments more broadly. 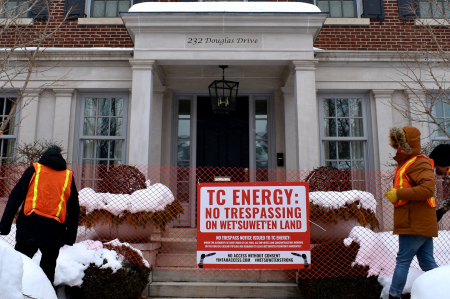 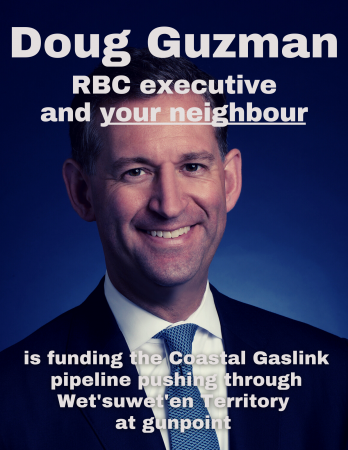 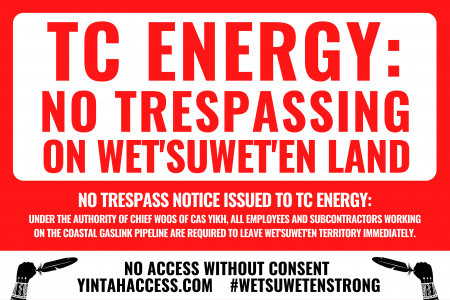 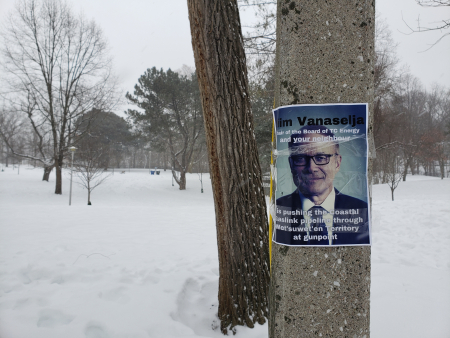