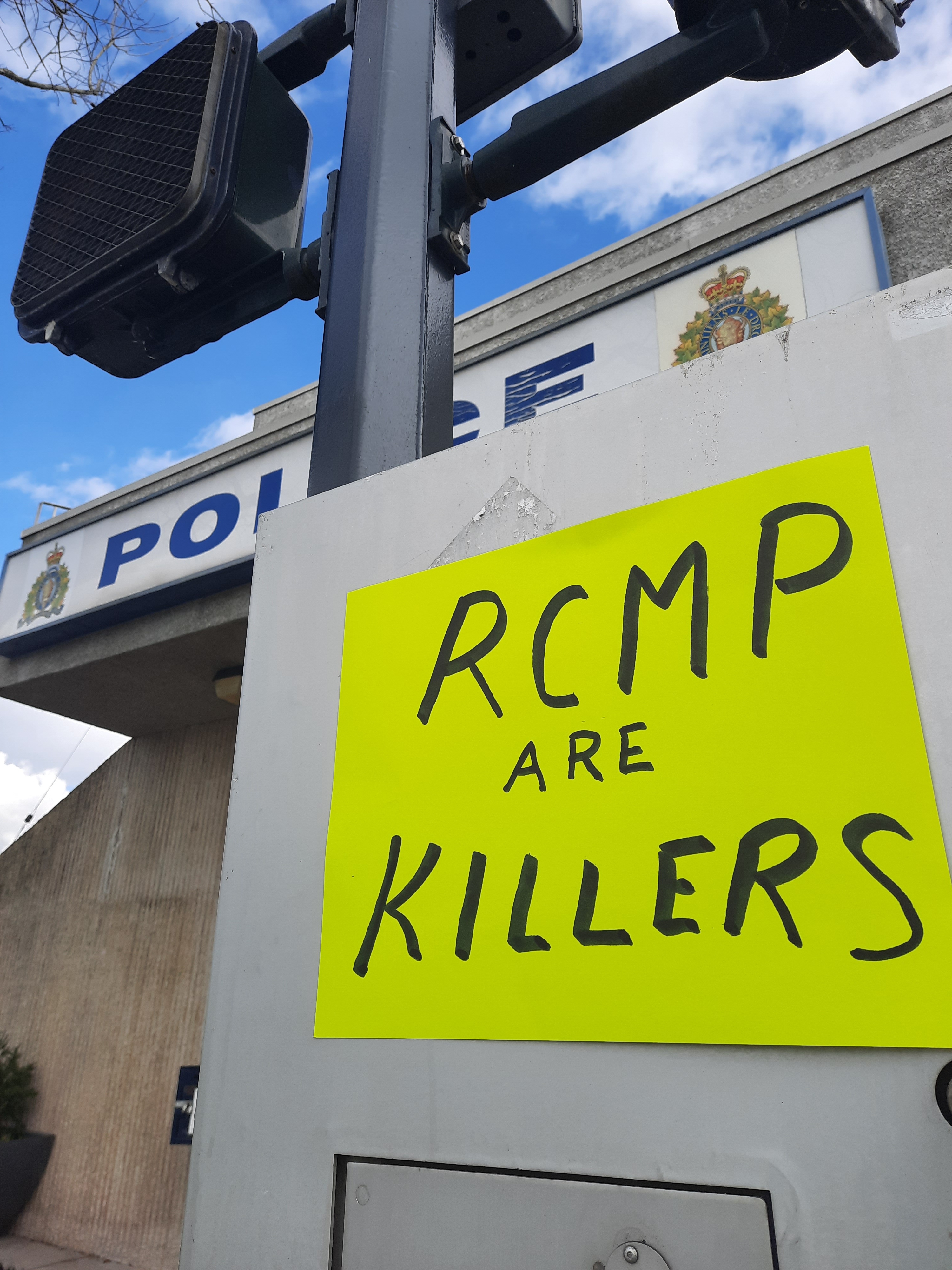 April 2022 was again a very bloody month of policing in so-called Canada, as at least a dozen people were killed by police or died through police actions. This matches September and October 2021 as the deadliest months in Canadian policing over the last year-and-a-third. Half of the deaths in April were at the hands of police in one province—British Columbia.

At least five people were killed by Canadian police or died through police actions in March 2022. This follows at least nine police-involved deaths in February and eight in January.

In April, three people were shot to death by police, all in Metro Vancouver—two by Surrey RCMP and one by Vancouver Police Department officers. Surrey saw a total of three policing-related fatalities, which was the highest of any municipality in the country. Across Canada, four people died in police custody, four were killed in incidents involving police using their vehicles, and one person died in a fall during a police action.

RCMP shot and killed a man in Surrey in the morning of April 1. The Independent Investigations Office (IIO) of BC reports that police received several calls regarding a man alleged to be involved in several incidents, including a carjacking. RCMP reportedly spotted a man near the intersection of 142A Street and 87A Avenue who they believed to be the person involved in one of the earlier matters.

A bit after 7 AM, RCMP claim officers engaged in a foot pursuit of a man they believed matched the description of the person seen near 142A Street and 87A Avenue. At some point during this engagement there was unspecified “altercation,” and police shot the man. He was transported to hospital and pronounced dead there. None of the police claims have been confirmed publicly and Surrey RCMP have a rather lengthy history of putting out deceptive statements after they kill someone.

There was a fatal police action involving RCMP in Campbell River, British Columbia on April 2. There are conflicting witness reports. One witness who lives near the Park Road scene reports hearing yelling, followed by a shot, more yelling, and then a second shot. Another witness reports seeing police interacting with a man “who appeared to be incoherent and out of it,” and was face-down on the ground with his arms handcuffed behind him. That witness claims police picked up the man and put him into the back of a police vehicle. The witness says that after a passage of time an officer checking on the person shouted for assistance from the other officers. The witness says officers then began performing CPR on the person for an extended period of time. That witness did not report hearing shots.

RCMP shot and killed a man in the morning of April 8, in Surrey, British Columbia. The IIO initially reported that at approximately 10:00 AM, RCMP were called to the 13200 block of 108 Avenue regarding a man who had “threatened to cause harm in a public place.” A man was located inside a residence, and police shot him. He was transported to hospital, where he died.

It has since been reported that police were called for a wellness check for a man who was said to be in crisis and “had threatened self-harm with a weapon in a public place.” RCMP and a mental health outreach team were dispatched to the man’s home. Later reports also say that members of the Lower Mainland Emergency Response Team were also at the scene.

A man fell to his death from the Leaside Bridge during a Toronto police action on April 15. The Special Investigations Unit (SIU) reports that at approximately 12:40 AM, two officers with the Toronto Police Service were deployed to the area of Millwood Road and Overlea Boulevard regarding a man sitting on the edge of the Leaside Bridge. According to the SIU, the officers approached the man and attempted to grab the man when he stood. During this interaction the man fell to his death on the Don Valley Parkway below.

Numerous people have fallen to their deaths during interactions with police. Details of the police interaction with the victim have not been released publicly.

A man died in RCMP custody in Surrey on April 16. The IIO report that police arrested a man on April 15 and detained him in Surrey RCMP cells. At around 2:35 PM the next day, the man was found unresponsive in his cell. He was pronounced dead there.

Two people were killed in a police chase on Highway 15 near St-Jérôme, Québec, in the early morning of April 17. The Bureau des enquêtes indépendantes (BEI) reports that St-Jérôme police department officers attempted to intercept the driver of an allegedly stolen vehicle at around 1 AM.  The driver reportedly refused to stop, and police engaged in a high-speed pursuit on Highway 15.

A 22-year-old man was killed and another 22-year-old man injured in a police chase in northwestern New Brunswick on April 18, 2022. It is reported that members of the Grand Falls police force attempted to stop a vehicle along the province’s Route 108. Minutes later the pursued vehicle crashed into a ditch near the community of Drummond, which is about five kilometres outside of Grand Falls.

Police pursuits are a serious risk to the public. Numerous people have been killed in police pursuits over the last few years in Canada and this was the third person killed in a police chase in a matter of days.

A 51-year-old man died in the Saskatoon Police Service detention unit on April 21, following an intoxication arrest the evening before. It is reported that patrol officers were called to the 1400 block of Eighth Street E. on April 20 at around 9 PM regarding a report that a man, believed to be intoxicated, had fallen. Medavie Health Services West assessed the man while police allegedly tried to find “alternative arrangements to house” him. Officers ended up taking him into police detention and placed him in a cell.

At around 1:20 AM on April 21, the man was found unresponsive in the cell. He was pronounced dead at the scene.

A man died in RCMP custody in Courtenay, British Columbia, on April 24. At around 4:30 AM on April 23, police arrested a man for allegedly trespassing at a residence in the 3300-block of Kentwood Road. The man was taken to Comox detachment and detained in a cell. At approximately 1:15 PM the same day, the man was found to be in medical distress. He was transported to hospital where he died on April 24.

Vancouver police shot and killed a man in an apartment building near Commercial Drive and East 5th Avenue on the evening of April 27, 2022. It is reported that the victim was in his 40s. Initial reports claim that Vancouver Police Department officers arrived at the building shortly after 8:30 PM. Witnesses report seeing at least a dozen police vehicles and hearing numerous shots around 10 PM. An ambulance was seen arriving at the site at around 11 PM.

Nova Scotia RCMP struck and killed a 22-year-old man with a police vehicle on April 27. RCMP officers in Antigonish County responded to a report regarding a man who was walking “possibly into traffic” on Highway 104 in Addington Forks at around 10:35 PM. While conducting patrols of the area searching for the pedestrian, an RCMP officer struck the pedestrian with their police vehicle. The young man was pronounced dead at the scene. 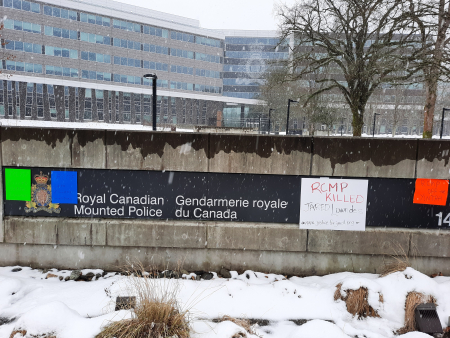