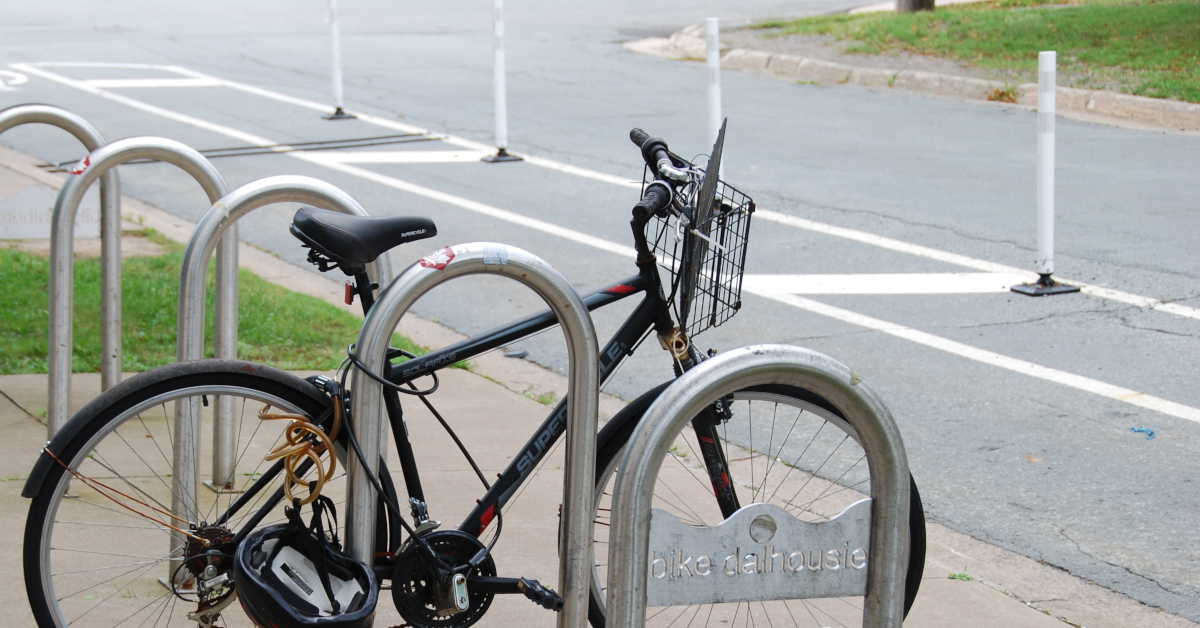 Peter Zimmer and Camila Fisher are avid cyclists and members of the Halifax Cycling Coalition, an organization committed to making their city safer and all-around better for cycling. Scott Neigh interviews them about the challenges that cyclists face in Halifax and about what the coalition is doing to make things better.

Zimmer has been using a bike to get around since at least the early 1960s and has been involved in the Halifax community in lots of different ways since he moved there in 1969. At 80 years old, he’s still going strong – he gets around using an e-bike and he chairs the coalition. Fisher’s involvement in environmental groups started when she was a university student in California in the late 2010s, and she is in her second year on the coalition’s board after returning to Halifax from a year abroad doing a Master’s degree in the UK.

According to the pair, notwithstanding occasional rhetoric to the contrary from the municipal government, Halifax does not have great cycling infrastructure – or, really, great infrastructure of any sort for all of those people that Zimmer described as “vulnerable road users.” With that phrase, he means everyone getting around the city by any means other than a car, including pedestrians, cyclists, those using mobility devices, transit riders, and so on.

Fisher said that the city is “very car-based.” She continued, “Lot of the streets aren’t planned for biking. They’re dangerous. You’re going on streets that people are driving down really quickly. Cars usually aren’t used to seeing bikes around. … If you [aren’t] living in central Halifax or downtown Dartmouth, you pretty much need a car to get around or else you’re going to be taking public transport. But, you know, it’s not planned very well. The buses don’t run very frequently. And there is a sort of stigma attached with any sort of transportation mechanism that’s not your car.”

An additional challenge, according to Fisher, is that even a lot of people who “have bikes wouldn’t see themselves as a cyclist. And they wouldn’t be using those bikes for non-recreational purposes.” In other words, they might go trail biking in the summer or bike around the block with their kids for fun, but they would be unlikely to use their bike as a day-to-day mechanism for getting around the city. She said, “I think there’s kind of a cultural shift that, in my eyes, needs to happen to make cycling an option for everyone. And that starts with the infrastructure. Because a lot of the reason people don’t see themselves as cyclists or use their bikes to get around is because, really, it’s not safe in many places.”

Zimmer said that while the Halifax Regional Municipality has at times proclaimed its commitment to safety for cyclists and pedestrians, “Frankly, they’ve done a very poor job of making much progress on those goals. They don’t take it seriously.” He said that even when the city has endorsed principles that sound promising, when those ideas filter down into what is actually implemented in terms of urban planning and road design, they are “considered grudgingly and last.”

The Halifax Cycling Coalition was founded in 2008, in response to a cyclist being killed by a car the year before. Originally started by a small committed group, it gradually grew, and in the mid-2010s was able to obtain some funding and hire an executive director. Precarious and project-based funding and barriers to being able to pay a living wage have meant that they have seen a great deal of staff turnover and therefore have never had as much stability and increased capacity as they had hoped. At the time of the interview, the coalition was once again working entirely on a volunteer basis. Nonetheless, they have managed, over the years, to accomplish a great deal

According to Fisher, the coalition’s work falls into three broad categories. The first is advocacy. Depending on the issue, this might be focused at the municipal or provincial level. It is, for the most part, reactive – supporting, opposing, or otherwise providing input into existing proposals for transportation-related legislation, decisions about road infrastructure, transportation planning, and so on. And they do this advocacy in all of the ways that you would expect, including researching the issue, meeting with politicians, making public presentations to government bodies, publicizing issues and demands through their networks, and doing lots of media work.

In terms of how it happens, she said that the group’s advocacy is often “project-based” and “person-based,” meaning that it is often focused on a particular initiative and that within the coalition, any given instance tends to be driven by one staff person or board member.

Fisher gave an example from late 2022. A member of the coalition heard an interview with a city staffer that revealed that the “all ages and abilities bike network” that the city had committed to completing by 2024 was substantially delayed, with only 40% done and a possible completion date of 2028. The member brought it to the coalition’s attention, and “one of our board members mobilized us all around creating an immediate press response, a press release to respond to this.” As the “foremost voice around cycling in Halifax – our response, it really means a lot. And it means a lot to the city [government], and we know that.” They also have considerable reach within the community through their mailing list and active social media presence, which they used to let members and supporters know about the issue. This generated a substantial community response. Quite quickly, a city councillor reached out, opening further opportunities for the coalition to exert pressure on the city. “So that’s how we get the message out. And that’s how we drive further advocacy.”

The second aspect of the coalition’s work is education. Over the years, they have offered lots of courses and workshops for residents of Halifax who are interested in everything from the practical basics of urban cycling to the details of specific bike-related issues. They, again, use social media and their newsletter to keep members and supporters up to date, and they’ve produced a cycling guide for the city that has been translated into multiple languages. And the final aspect of their work is organizing public events, often mass bike rides, to build community and to build the capacity and visibility of the organization.

There are lots of ways the group would like to enhance their work in the coming years. They want, for instance, to make sure they are doing as much as they can to focus on the cycling and other transportation needs of low-income and newcomer communities, and of parts of Halifax outside of the urban core. They want to shift from being reactive to being pro-active in their advocacy. And they are working on ways to be able to hire staff in a more sustainable way and pay them a living wage, as a path to growing the group’s capacity.

Fisher said, “We haven’t necessarily had the most unified or coordinated approach to advocacy. But certainly, we’ve been impactful where we focus on a single project. Moving forward, I think, I would like to see our advocacy more coordinated, and more pro-active. … Rather than waiting on the city’s lead, and waiting until things are happening for us to say, hey, this can be made better, and get our two cents in, I think it’d be really useful for us to, you know, start by identifying some things that we think should exist that don’t exist, and making those happen here.”

Zimmer said that his “five-year goal” is “to say it’s not good enough to make the streets safe in the dense urban core. We have to figure out ways that the streets throughout the city can be linked by cycling or multi-use pathways, and make the streets there safer in the outlying areas.”

Fisher added, “One of the questions that I ask myself is what would it take for someone in one of the suburban areas or somewhere that’s not the city centre to feel comfortable biking to get what they need to get, to do what they need to do? What would it take for someone that lives in [one of these areas] to be able to hop on their bike and go get groceries? So we’re talking not only about street design, but about urban planning.”

Please read about the big changes coming for Talking Radical Radio in 2023!