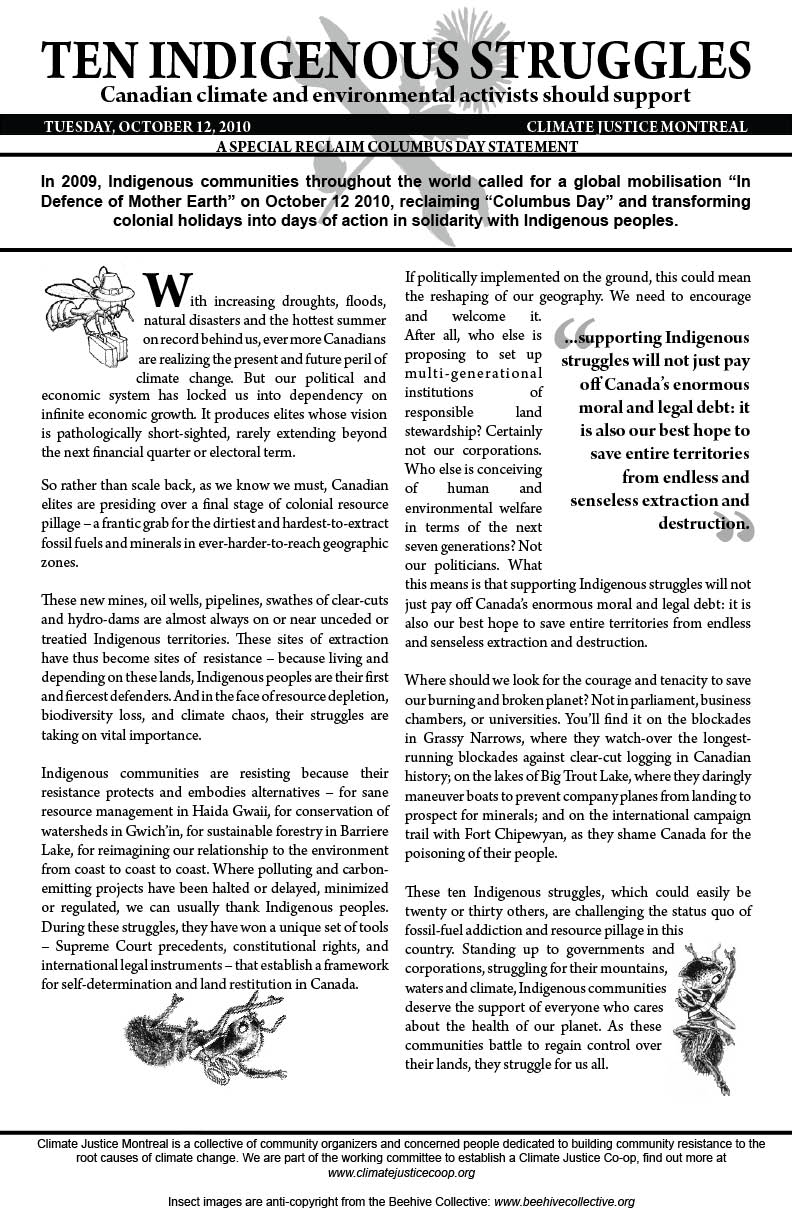 10 INDIGENOUS STRUGGLES
Canadian climate and environmental activists should support
A RECLAIM COLUMBUS DAY STATEMENT by CLIMATE JUSTICE MONTREAL
In 2009, Indigenous communities throughout the world called for a global mobilization “In Defence of Mother Earth” on October 12, 2010, reclaiming “Columbus Day” and transforming colonial holidays into days of action in solidarity with Indigenous peoples. Responding to this call and the demand for a day of action for ‘system change, not climate change’ issued by the global movements gathered in Copenhagen last year, Climate Justice Action has organized a day of direct action for climate justice.
::: Download A Copy! :::

With increasing droughts, floods, natural disasters and the hottest summer on record behind us, ever more Canadians are realizing the present and future peril of climate change. But our political and economic system has locked us into dependency on infinite economic growth. It produces elites whose vision is pathologically short-sighted, rarely extending beyond the next financial quarter or electoral term.

So rather than scale back, as we know we must, Canadian elites are presiding over a final stage of colonial resource pillage – a frantic grab for the dirtiest and hardest-to-extract fossil fuels and minerals in ever-harder-to-reach geographic zones.

These new mines, oil wells, pipelines, swathes of clear-cuts and hydro-dams are almost always on or near unceded and treatied Indigenous territories. These sites of extraction have thus become sites of  resistance – because living and depending on these lands, Indigenous peoples are their first and fiercest defenders. And in the face of resource depletion, biodiversity loss, and climate chaos, their struggles are taking on vital importance.

Indigenous communities are resisting because their resistance protects and embodies alternatives – for sane resource management in Haida Gwaii, for conservation of watersheds in Gwich'in, for sustainable forestry in Barriere Lake, for imagining different relationships to the land from coast to coast to coast. Where polluting and carbon-emitting projects have been halted or delayed, minimized or regulated, we can usually thank Indigenous peoples. During these struggles, they have won a unique set of tools – Supreme Court precedents, constitutional rights, and international legal instruments – that establish a framework for self-determination and land restitution in Canada.

If these political victories are implemented on the ground, this could mean the reshaping of our geography. We need to encourage and welcome it. After all, who else is proposing to set up multi-generational institutions of responsible land stewardship? Certainly not our corporations. Who else is conceiving of human and environmental welfare in terms of the next seven generations? Not our politicians. What this means is that supporting Indigenous struggles will not just pay off Canada's enormous moral and legal debt: it is also our best hope to save entire territories from endless and senseless extraction and destruction.

Where should we look for the courage and tenacity to save our burning and broken planet? Not in parliament, business chambers, or universities. You'll find it on the blockades in Grassy Narrows, where they watch-over the longest-running blockades against clear-cut logging in Canadian history; on the lakes of Big Trout Lake, where they daringly maneuver boats to prevent company planes from landing to prospect for minerals; and on the international campaign trail with Fort Chipewyan, as they shame Canada for the poisoning of their people.

These ten Indigenous struggles, which could easily be twenty or thirty others, are challenging the status quo of fossil-fuel addiction and resource pillage in this country. Standing up to governments and corporations, struggling for their mountains, waters and climate, Indigenous communities deserve the support of everyone who cares about the health of our planet. As these communities battle to regain control over their lands, they struggle for us all.