A tale of two sites

A tale of two sites 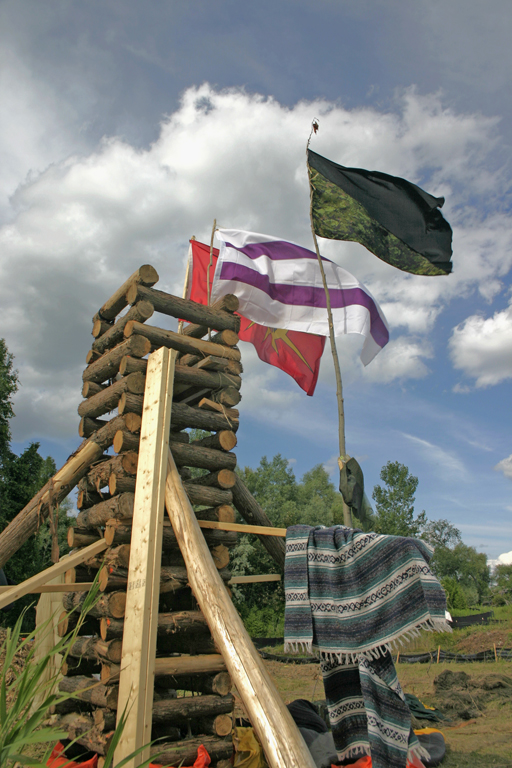 A summer of action
At the end of a summer of activity and action, a 675-acre tract of land in the south end of Guelph rests relatively quiet now. It has won a one year break from the threat of development despite remaining a proposed construction site for what the City of Guelph is calling the "Hanlon Creek Business Park" (HCBP). The site is home to a rare Old Growth forest, a Provincially Significant Wetland, the Paris-Galt moraine, a vital drinking water recharge zone, and a threatened species called the Jefferson Salamander.
About a 3 hour drive north of Guelph exists another place that has seen a lot of action. This place in Simcoe County is called Site 41, and is the location for a proposed garbage dump. It sits directly above the Alliston Aquifer, which is an important source of clean drinking water in the area.
Despite the distance between them, the two sites have seen comparable public outcry and their respective occupation efforts that have brought people together to successfully oppose the developments.
After months of city hall meetings, rallies and education campaigns, the Guelph opposition to the HCBP was not heeded by the City and the construction of the HCBP looked like it was going to go ahead. This was thrown into question on July 27th when, in the early morning, roughly 60 people arrived and set up an occupation camp - complete with a kitchen, shade structure and composting toilet system.
In Simcoe County, the Site 41 protest camp had been set up since May 8th, having been initiated by a group of Anishinabe Kweag, (Anishinabe women), from Beausoleil First Nation. Vicki Monague is part of that initial group of campers and describes the weekend's events and describes how the weekend campout turned into a more permanent protest camp. "May 8 2009 was the day that we started the camp, and we lit a sacred fire there. At the end of the weekend, we were going to pack up and go home, but it was channeled to our fire keeper that the fire was lit in protection of the water and that purpose had not yet been completed, so we stayed. The fire has been burning now for 112 days (as of Aug 31)",
The protest camp drew people from all over the area, and evolved into a blockade later in the summer when it was announced by the warden of the township that trucks hauling garbage would be coming within a couple of weeks.

City manoeverings
Each at the HCBP and at Site 41, the local government bodies have been major players pushing through the development. The City of Guelph owns about 60% of the proposed HCBP lands and Simcoe County owns the Site 41 location. Each have engaged in aggressive legal means to bypass grassroots opposition and see construction through.
On the afternoon of July 31st in Guelph, a group of city representatives, employees, police and an "intelligence officer" arrived to deliver the files that the City would use to support their motion for injunction against the occupation as well as their lawsuit against several named and unnamed persons. "You can't submit an injunction without a lawsuit, so the city filed for an injunction as well as a lawsuit", explains Sam Ansleis of the occupation. The lawsuit included allegations of conspiracy and interference in economic relations among others. The amount that the City was seeking in damages was $5 million.
The lawsuit was quickly classified as a SLAPP (strategic lawsuit against public participation) suit by the occupiers' lawyers. "Basically a SLAPP suit is used by a company when there is opposition to anything that they are doing in order to silence public opposition to a project. This is not a word that we used; this is a word that our lawyers used when we showed them the injunction", Ansleis said.
The irony of the City's actions was made apparent when documents accompanying the lawsuit contained copies of correspondences from the Ministry of Natural Resources imploring the City to stop the construction of the HCBP. It also included copies of gag orders against a researcher along with one imposed on a local neighbourhood group.
The Guelph City Council had agreed unanimously to launch the lawsuit and injunction following an in-camara (meaning no observers) Council meeting.
Karen Farbridge, the Mayor of Guelph, has come out in active support of the HCBP project, despite the fact that she was elected on a "green" platform.
However, due to the time lost as a result of the occupation, the City announced that it will postpone construction until spring 2010.
Similarly in Simcoe County, Guergis was elected in Springwater County as Mayor, stating clearly that he would oppose Site 41. When he was later elected as Warden to Simcoe County, waste management became part of his portfolio, and he has been an avid proponent of Site 41 since. He claims that Site 41 would be a more technically sound site in comparison to the other landfills in the area that are equipped with "inferior engineering".
In their attempts to proceed with construction at Site 41 despite the blockade and protest camp, members of the County Council launched a lawsuit naming two of the Anishinabe Kweag for damages at $80,000 per week in lost time, "so we were estimating that they were going after us for about half a million", says Monague.
"They actually dropped the lawsuit against us on aug 25 on the day that we got the moratorium, only because [some county executives] didn't go to Council before going after [us]".
When questioned about whether or not construction would continue at Site 41 next year, Guergis pointed to the cost of renewing permits and winterizing, along with the considerable public pressure, as reasons for not going ahead. "Considering these", he says, "it seems an impossible situation to get approval to reopen the site twelve months from now."
He also points out that "100%" of the houses put out garbage at the curb every week.
"I think we have to stop and say we are going to wait for direction from those dealing with the issues. So we will look to the people on the ground and see what their decisions are regarding their own garbage".

Victory
The HCBP occupation and Site 41 have each achieved victories from their recent efforts. "We were successful in our goal; our goal was to stop construction of the culvert for this summer. The project will continue in the spring, so resistance will continue in the spring," says Ansleis. She adds: "this resistance has not only been about the the hanlon creek business park. it is about this kind of development that is taking place all over Turtle Island."
Monague also recognizes that, while a victory has been achieved, the issue is not resolved. "The improtant thing now is that, even though we got the moratorium, the work definitely is not done. I know that many of us will be working to make sure that the water is protected."
"This partnership [that we have experienced around Site 41] between native and non-native communities is pretty much historic. I don't remember a partnership like this ever happening around here and i think it is going to last for a long, long time."