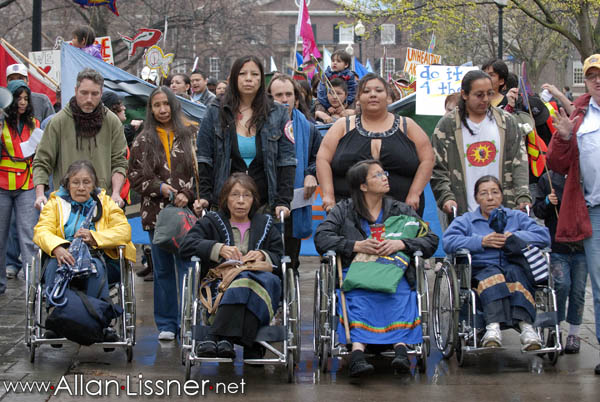 This is what killed us"; said Betty Riffel, as she held up a bottle of water in her quivering hand. “My hand, it shakes, thats from the water from the Wabigoon River”

She spoke before a room full of 150 supporters on April 6th. Her community of Wabauskang is one of several that were poisoned by the mercury that was put into the Wabigoon River by a paper mill. The next day over 250 people marched to Queens Park in the “River Run Rally” to bring attention to a situation they believe the government has been ignoring.

Wabigoon River has been poisoned by mercury from a paper mill for over 60 years. In 1970 this poisoning was acknowledged by the Ontario Government when they banned fishing in the river. The mill has closed, but a recent Japanese study revealed that the health impacts of mercury are even worse today than in the 1970's. The communities effected by the poisoning include Wabauskang (formerly associated with Quibell), Asubpeeschoseewagong (commonly known as Grassy Narrows) and Wabeseemoong (commonly known as White Dog).

On Wednesday April 7th, the issue around water these communities have been facing were voiced in the streets of Toronto by the River Run Rally. A march of over 250 people from Grange Park to the steps of the Ontario Legislature, in a cascade of giant 30 foot banners in different shades of blue. Throughout this "river" many of those in the march wore blue clothes, and some held up cardboard fish. The march was led by four women from Grassy Narrows and Wabauskang, who were being pushed in wheelchairs, including Betty Riffel. The vibrant rally ended with speeches at Queens Park.

"Since we lost so many of our people, we want the government to recognize us, that we are people too" Riffel told the Toronto Media Co-op, "In Walkerton people got help, but what about us? Its like they are saying: 'It's just one more dead Indian, it doesn't matter'”.

“There were 60 of us that lived [in Wabauskang]. There are ten of us left. I have names of all of them” said Riffel, who is 71 years old, “In the 30's the water was contaminated our people started dieing left and right especially the babies. I can count eleven babies that died the mothers fed the babies canned milk mixed with water from the rivers. So what they were doing was giving the babies poison.”

Premier Dalton McGuinty's office did not responded to a request to comment on this story.