Hurry Up! Ratify the Canada-Colombia FTA before we are Caught

Hurry Up! Ratify the Canada-Colombia FTA before we are Caught 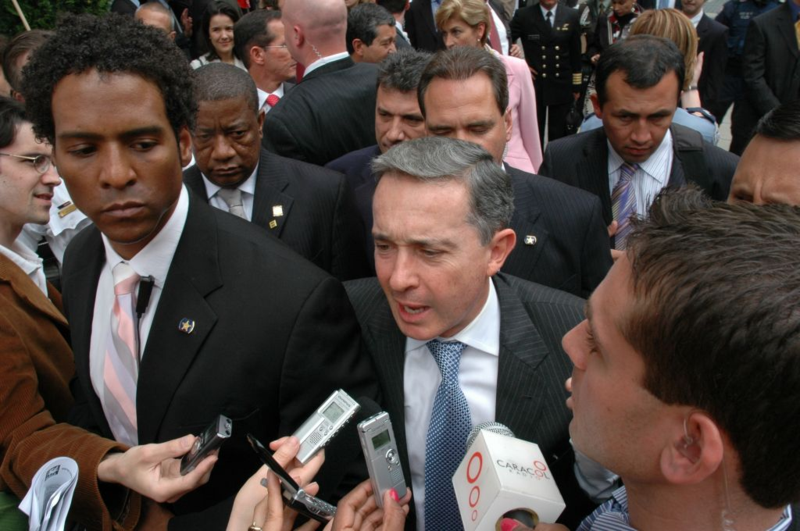 IvÃ¡n Cepeda is an elected member of the Colombian Congress for Polo DemocrÃ¡tico Alternativo on behalf of the Colombian Movement of Victims of State Crimes (MOVICE). IvÃ¡n is a journalist, a writer, a thorough researcher and one of the most legitimate and credible voices in Colombia. He is also a direct witness to exceptional happenings and has interviewed sources providing unique and reliable information. His father, a member of the UniÃ³n PatriÃ³tica Party, was murdered by death squads. IvÃ¡n has published "Los Expedientes de la Casa de NariÃ±o": The Casa de NariÃ±o Files, referring to the Presidential Palace in Colombia. This translation (attached) of an original devastating document in Spanish, which outlines some of the most visible criminal activities of the Colombian regime, is made public as the CIIT of the Canadian Parliament announces itÂ´s decision to stop listening to testimonies and expert witnesses against the CCFTA.

In fact, the Conservatives and Liberals have decided to ratify a damaging and destructive agreement with a criminal regime precisely because these files and other testimonies and documents have been and are beginning to be exposed. In fact, the Washington Post (see below), published an interview where a credible direct witness exposes President UribeÂ´s brother SantiagoÂ´s direct involvement with a death squad (1). This new testimony must be added to the now innumerable files and reports on the Colombian regime(2), which will not be brought to justice, as IvÃ¡n explains in his "Files", because of the structural mechanisms of impunity that exist within the Colombian institutions. In fact, you will notice an outrageous strategy used by President Uribe in the Colombian Parliament, where he asks parliamentarians linked to death squads (paras) to approve legislation quickly, before they are sent to jail.

Under these circumstances, if the CCFTA is ratified, it will constitute an outright violation of justice in order to impose an agreement. Both parties being equally responsible. It is an agreement between two criminal regimes and against the peoples of both countries. How else can one explain the motives behind rushing to approve it as the evidence exposes that it entails complicity with those charged as perpetrators of the worst crimes against humanity?

The Liberal Party of Canada, under the guidance of its Trade Critic Scott Brison and unified in a cover up operation that includes closing doors to witnesses, mistreating experts and victims and promoting illegitimate and criminally linked sources, is just as guilty as the Conservative Government.

Colombia is being transformed into a concentration camp for corporate profit (the project is under construction but advancing very quickly) and a source of instability for the entire Continent. The euphemism "Free Trade Agreements" refers to the legal framework within which this concentration camp should function. The legalization of this "Colombia Model" of a nation transformed into a territory where crime guarantees cheap exploitation and profit, requires the complicity of parliamentarians and governments, such as Liberals and Conservatives in Canada and their counterparts in the European Union. In order to provide a semblance of legitimacy to what could not have it, the Liberals and Conservatives mounted a farce, whereby the CIIT pretended to listen to witnesses in order to come to a decision. When the witnesses began to bring out the truth and more started to be exposed, when Peter Julian of the NDP(3) and the BQ parliamentarians presented the evidence and asked the obvious questions, the farce began to fail and get out of control. Now that Ivan has published the files and that so many more documents and testimonies are available and now that the tip of the iceberg is visible and much more has to be exposed, the conductors of the farce silence the truth to impose the criminal agreement and decline their ethical and legal obligations towards their constituencies and Canada.

If this Parliamentarian process had not been a farce, then, at this stage and given all the information available and required to make a decent decision favourable to trade for the benefit of Canadians and Colombians alike, the CIIT would have had to face one and only one decent choice: Not only could it not carry on with the ratification of the CCFTA, which involves Canada as a partner of crimes against humanity for profit, but it would have to proceed in the opposite direction, that is, to recommend the immediate and urgent creation of an independent international inquiry commission at the highest and most credible level, to establish the relationship between corporate interests and the systemic, systematic criminal activities of the Colombian regime.

When someone is wrongly charged and at court the evidence not only proves the accused is innocent, but points at who should be charged in stead, the procedure in justice, cannot be the sentencing of the innocent, nor ending the proceedings quickly to protect wrong doing. In fact, those wrongly charged, become key witnesses to the establishment of the truth and the attainment of justice. This is the case regarding the CIIT, proposed Bill C2, the CCFTA. Those who accuse the victims of being "against trade" and "ideologically motivated"; those who point at corporate speakers as "victims" of this "ideological" persecution, are, under the weight of the evidence, guilty of their own charges.

There is wrongdoing and criminal behaviour involving some of those promoting the agreement at the highest places in Colombia and likely in Canada. There is enough public evidence available to demonstrate that ignorance of these facts cannot be argued credibly, while there are sufficient grounds for a formal inquiry on grave allegations that point at the involvement of the Canadian Government and Conservative and Liberal parliamentarians and parties with serious offenses to cover up and indeed support criminal actions in breach of the trust granted to them by the Canadian public with regards to trade decisions, that should never be made to protect and support criminal activities, as is the case with the CCFTA.

This statement is left for the record. As the horror and terror becomes known, the beneficiaries and the accomplices, will one day have to face the victims, their relatives and communities, the irreparable damage done. They will be reminded of their arrogance and abuse of power. They will have to face the consequence of their actions.

Those, among the Canadian media, who decided to distort the information and deny a voice to the victims and presented the evidence in order to promote the deal against its victims, should also face the consequences of their actions.

Those within the Canadian citizenship who, knowing these facts, facing these grave ethical questions, chose to do nothing and allow their Government and Parliament to carry on with something that is undemocratic and wrong, will also have to face the victims and the crimes.

Canadians and the Canadian Parliament should lead a supra national enquiry on trade and crime in Colombia. In the meantime, the agenda of terror and exclusion advances under "Free Trade". The directive in Canada seems clear: Ratify the CCFTA quickly, before you are caught.

3. The Circle Opens Out: http://upsidedownworld.org/main/colombia-archives-61/2508-the-circle-ope...

-While recognizing the heroic resistance of Colombian communities and peoples under constant danger, who insist, paying with their own lives on resisting the crimes of "free trade", one has also to acknowledge and applaud the persistence and commitment of those Canadians who have insisted on exposing the truth, stating the facts and allowing Colombians to be heard and recognized.