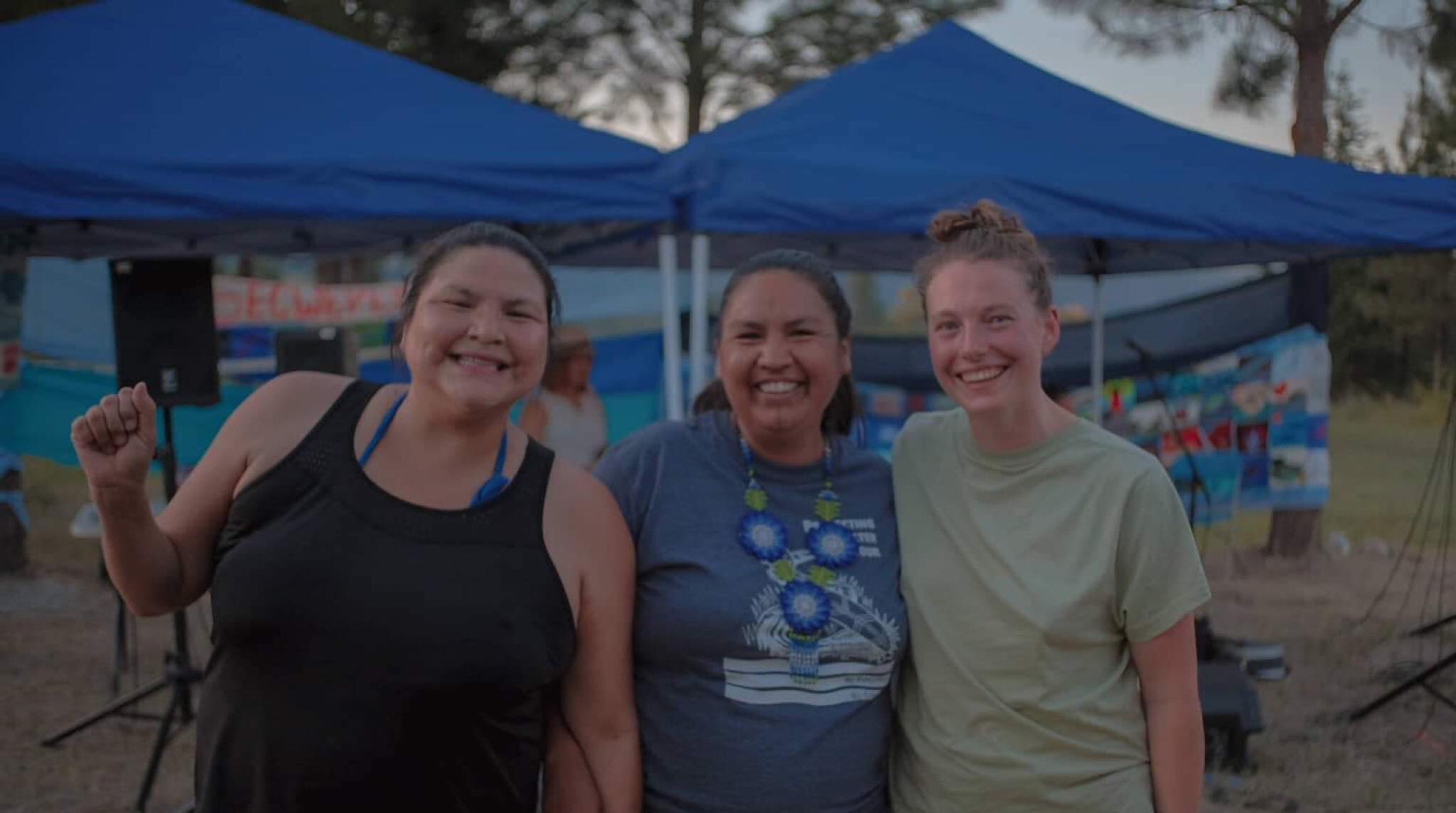 In late June, as temperatures soared on the west coast, community members came together for two concerts in Nlaka'pamux and Secwepemc territories in the interior of BC. Named the Protecting the Water Tour 2021, the aim of the concerts was to celebrate community and to show united opposition to Canada's Trans Mountain Pipeline Expansion Project, which is being built without these nations' consent.

Among the attendees and organizers were Indigenous water protectors and settler allies who have been very active in opposing the pipeline. Several were arrested last fall for holding ceremonies and blocking pipeline construction. They have court dates in August.

In September 2020, Billie Pierre – a Nlaka'pamux water defender and Media Co-op board member – did a one-person blockade at Falls Lake, within her homeland. “It was the first day they had planned to log there and I stopped them that day,” says Pierre. “It was an area with bigger trees than most areas of the Coquihalla and rich in biodiversity.” She was detained and released the same day.

A few weeks later, Secwepemc matriarch Miranda Dick held a haircutting ceremony at the gates to a pipeline construction site on the Secwepemcetkwe or Thompson River. Dick says the ceremony was successful, because while the construction crews were trying to drill the pipeline route underneath the river a few days later “they actually hit rock and so they ended up having to do a redrilling, they call it, for that portion.” This delayed the project and likely added to the cost.

Heather Lamoureux, artistic director with Vines Art Festival and a lead organizer of the Protecting the Water concert tour, was one of the settler allies arrested at the haircutting ceremony. Lamoureux, like the others arrested, is representing herself in court.

“We’re challenging the court’s jurisdiction and Canadian law in general,” Lamoureux says.  “All of us non-Indigenous supporters are choosing to follow the leadership of the Nlaka'Pamux and Secwepemc people to not engage with Canadian law.” In practice, that means “not engaging with lawyers and not engaging with their law system,” and she says by doing this, “we can continue to uphold Secwepemc jurisdiction on their own territory.”

This approach to legal defence has been used in the past by Indigenous peoples in their own territories, but according to Lamoureux, Dick, and Pierre, they are not aware of it having been used before by allies.

Pierre traces that approach back to a legal argument developed by the late Wolverine Ignace, a prominent Secwepemc land defender, which is premised on the fact that even the settler courts recognize the territory is unceded. She said, “The Secwepemc people that we were arrested with and that we’re supporting are all very experienced in legally defending themselves – they avoided convictions in many different land struggles. … I myself am relatively inexperienced so we’re completely following their leadership. I want to learn that [knowledge]. I want that to be more accessible – especially since there’s all these nations in so-called BC that are unceded and this land is ours. Their laws recognize this.”

Miranda Dick is the granddaughter of Wolverine. Asked about his role in passing down knowledge about protecting Secwepemc territory, Dick recalled the 1995 Gustafsen Lake or Ts'peten standoff. Secwepemc people, including her grandfather and other family members, occupied part of their territory and had to face the Canadian Armed Forces.

“My grandfather took that upon himself then to state what I’m stating now, which is that we’re within Secwepemc territory, we’re doing ceremony, and we’re protecting our nation and what we believe in.” She continues, “My grandfather stood up against the Canadian Army and survived the 77,000 rounds that the military shot at him and others. We come from a long line of resistance and what that looks like in our own communities. We couldn’t just let a pipeline come through our territory without saying no.”

As Pierre puts it, “I want these projects to stop. Now is a really, really sensitive time. All over Canada, things that we knew about, like the children [who died at residential schools], are being discovered. We’ve known about [the graves], like, I’ve never not known that Native children were treated with cruelty in those schools and that some died there. It’s now becoming public knowledge. Those residential schools took place to keep us off our land, and to try to get us to forget who we are. We deserve to live how we want to in our own homes, on our own homeland. I don’t care what kind of money you can get from logging or from mining or from privatizing the water, the Canadian government is just trying to control us more. I don’t care. And now is the time for people to open their eyes and protect what we have that’s left. Let’s heal and regenerate our territories again.”

Pierre sees how much has already been taken from Indigenous peoples, how much of their territory has been impacted. “It’s time we really open our eyes and really see this is our home and our land and we have every single right to be here and to be left alone.”

Dick echoes this sentiment. “Coming from my community of the Secwepemc Nation, we’ve had to do many community organized events such as this evening’s Vines festival,” she says. “So right up until being current with the 215 children that were found at the [Kamloops] residential school within our territory, we’ve been having to do ceremonies to state that we’re still here. And also leading into August 3rd for one week of court dates and then to the second court date pretrial to August 10th. [We’re] having to prove to the courts of law that we’re still here.”

While many politicians and pundits talk about residential schools being part of Canada’s past, those like Dick who are fighting TMX see the connection and the continuity of the colonial project going through to the present. She states that they are preparing a large affidavit for their court case laying out this ongoing process of dispossession.

Dick also points out that for the Secwepemc Nation (or Shuswap Okanagan Confederacy), “as a collective, we hold title to the land and therefore it can never be sold, because it belongs to the children. That’s from the Shuswap Okanagan Confederacy, and that’s right from the hereditary chief structure, followed by the matrilineal.” Dick states that the traditional government, of which she is a matriarch, is fully in support of the fight against TMX.

As for settlers who want to help, Lamoureux has a few ideas. While much of the settler activism happens on the coast in places like the Vancouver region, there is a lot of organizing that can happen in the interior. “How do we help settler folks in Merritt and Kamloops also join? How do we encourage that and have, like, the bird finding network [become active there]?” TMX construction was ordered to be paused in April after hummingbird nests along the logging route for the pipeline were found and reported by the Community Nest Finding Network.

“[How do we] find ways to have groups like that stretch across different territories and create more partnerships and follow the leadership? There’s a lot of relationship building that needs to happen and that takes time so that we can properly follow the leadership of the grassroots Indigenous people on their territory.”

Lamoureux also mentions that the big annual Vines Art Festival is happening in Vancouver, August, 9th to 19th. “All of our focus is on land, water and relational justice. It’ll be a good festival and we’ll be in person again, so that’ll be exciting!”