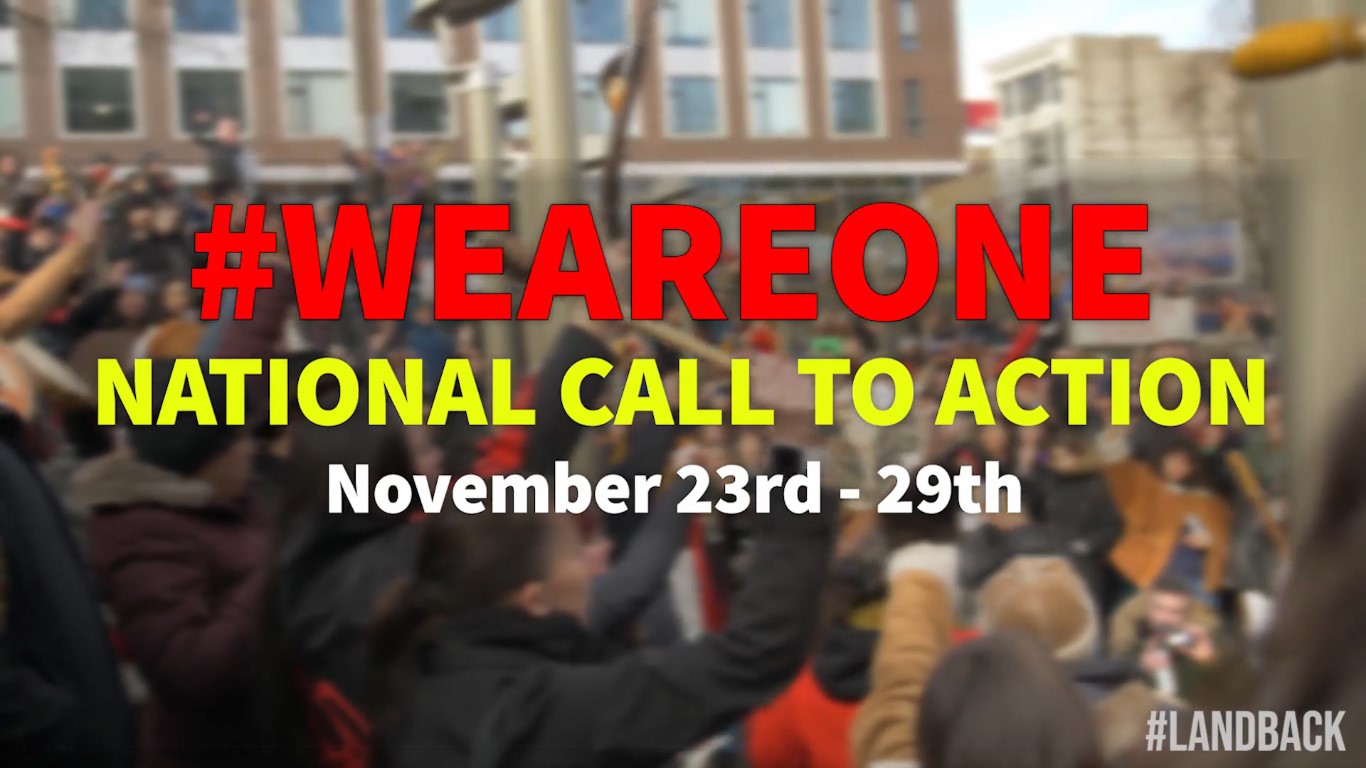 The pace and violence of colonial dispossession led and facilitated by Canada has not abated during the pandemic. If anything, it has increased. While people have been told to stay home, many industrial projects trampling on Indigenous rights have gone full speed ahead.

In Wet'suwet'en territory, man camps, construction, and the RCMP are wreaking havoc, physically destroying the land and spreading disease while preparing to build the Coastal Gaslink fracked gas pipeline.

In Secwepmec territory, the government of Canada is currently working to drill the Trans Mountain Pipeline under the sacred Secwepemcetkwe (Thompson River) near Kamloops, BC. Secwepmec nation members acting in accordance with hereditary leadership to stop the drilling have been arrested.

In Dish With One Spoon territory near Six Nations (Caledonia), Haudenosaunee land defenders have been protecting 1492 Land Back Lane from a settler housing development, and staring down the OPP, for over 120 days. Dozens have been arrersted or have warrants out on them.

The Kanienkehaka Land Back Language Camp has been occupying their territory despite repeated harrasment from the RCMP and the Quebec provincial police (Sûreté du Québec).

Mikmaq lobster fishers on the Atlantic coast have faced horrific violence and racism, including arson, from settler fishers, as well as indifference and worse from colonial police and governments. The federal Department of Fisheries and Oceans has even taken an active role seizing their lobster traps.

To bring attention to these and other struggles and defend what is theirs, frontline leaders are calling for a week of action, #WeAreOne, from November 23rd to 29th. Here is their message, taken from a video made as a collaboration between these land and water protectors:

"The Indigenous people of the land have been under attack ever since the first invaders came to our shores. We have been defending our lands and protecting our waters for generations.

We have never stopped and we never will. Our laws demand that we uphold our sacred responsibilities, not only for ourselves, but the next seven generations. Our fight and love for our land and our people connect all Indigenous people.

From coast to coast we are united. We must stand in solidarity and defend our relatives that are being attacked by these invaders. Invaders that intend on destroying our land and water for profit and impeding our right to be free people.

As Indigenous grassroots people, on the frontlines, we call on you to join us in solidarity from Nov 23-29 as a national call to action to support and respect our sovereignty.

We call on you to demand justice for our people, to hold the companies committing acts of genocide accountable through direct action and rallies where you are.

We are one, we are united, and we will fight, together."

"In the Lower Mainland of British Columbia action will kick off Monday November 23 at noon with a gathering at Grandview Park on Commercial Drive," reads an email from the Unist'ot'en Solidarity Brigade on Friday, November 20th. "More details will be available then. Details on location and type of action(s) are not being broadcasted in order to maintain security and the element of surprise."