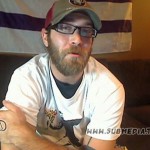 For Alex Hundert, maintaining a routine has been one of the only ways of asserting any kind of control over his life. Jailed since October 23 on politically motivated charges stemming from resistance to the G-20, Hundert has taken to reading two papers a day and writing letters to friends and other prisoners to pass the time.

On Monday, Hundert and his lawyer are challenging the Ontario Crown Attorney’s office's ability to lead the prosecution, due to their bias. I had a chance to speak with Alex by phone on Saturday afternoon, these are some of the thoughts he wanted to share.

On his upcoming court date...

"I would call it essentially malicious persecution, although that maybe over-stating it somewhat.

"They've charged me with this ridiculous "intimidating a justice participant" charge. The two Crown attorneys who are laying the charges against me are the same ones who since June have been trying to keep me locked up in jail. They appealed my initial release in July. When they lost that appeal, a couple days later they charged me with a breach for speaking on a panel, which was the so called freedom of speech stuff.

"Then once I got out on that bail, a week later they charged me with this intimidating a justice officer stuff. The [Ontario Crown Attorney's Office] is bent on punishing me personally for what happened on the street. They are targeting me specifically and are coming after me, and will really do whatever they want. They have and will abuse their power in order to try and keep me locked up."

On the Prison Justice System...

"In this detention system that I'm in right now, which is pre-trial custody, all of the men are not innocent until proven guilty, which is the way most liberal people understand our system. But these men are all guilty unless proven innocent. The default for all these guys - anyone with a record, anyone without substantial family assets to be able to get bail, anyone from targeted communities - they are presumed guilty once arrested and until they can prove their own innocence.

"It's not just maliciousness, but throughout the system there is a reality of impunity. It's not just a presumption of impunity; it is real impunity that they operate in."

"Basically I am inside a small concrete isosceles triangle; it is about 25 by 25 by 30 feet in size, with a 9 foot ceiling. This is a space that was designed in the late 70s for 10 people. There are 10 cells in here. But in the 80s they put in a second bunk, and sometime in the late 90s they started sleeping a third person in each cell, on the floor.

"One of the things they do in prison is they don't bring us 30 meals every day, every meal time. They bring us 35 meals, and they roll them in on a cart. They've taken so much away from people who are in prison, they're so disempowered. A lot of the times all it takes is a few trays of food to turn people who are so disempowered against each other, which leads to the creation of all these hierarchies of the people who live in this tiny little triangle.

"Only a few times a week do we get outside of this tiny little triangle.

"On this range I am the only one with a university education. Half of these guys come from the same neighborhood, and are in here for mostly petty crimes. The vast majority of people in the prison system are people of colour, and most of them young black men from just a few different neighbourhoods. The racism of the larger system is laid so bare here.

"One of the things I am so grateful and appreciative for is all the love and support coming in from the outside. A really special special thank you to all the people on my support committee who are actively doing all that support for me. Because it has been so important, and it has made me feel so loved."

Write to Alex in jail and read other updates from his support committee “Alex Hundert: 30 days behind bars.”