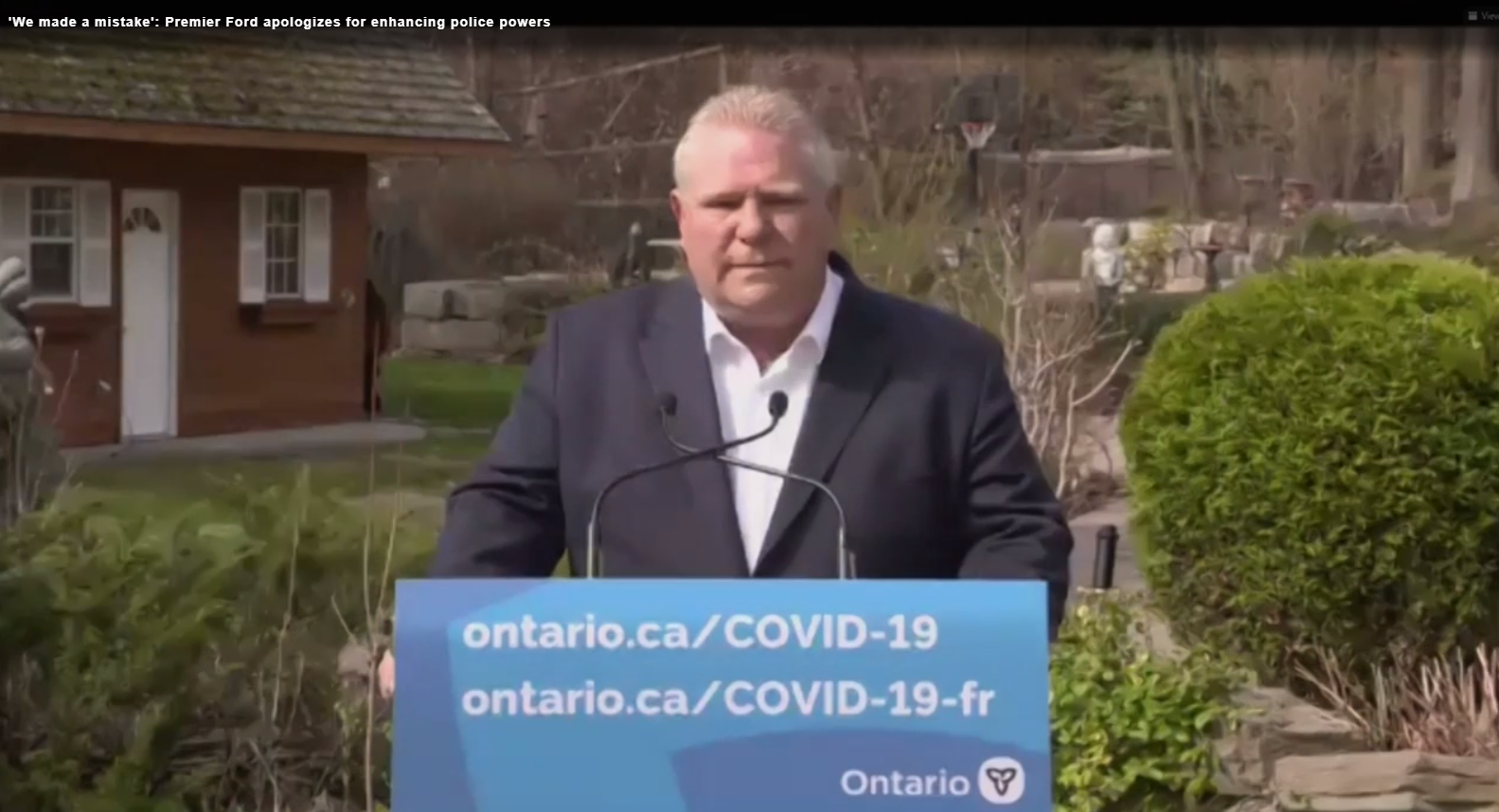 Speaking at a press conference from his home while self-isolating, Ontario Premier Doug Ford appeared, at one moment, to get choked up.

“Hold on, folks. I apologize,” he said, as he turned sideways to take a sip of water, presumably to compose himself. He could’ve been speaking to the reporters listening in. But I choose to believe he was speaking instead to his teleprompter people, who were scrolling his words up too fast during his little choreographed moment of empathy and compassion for all those he has put at risk during this pandemic, including – but not limited to – those who’ve had to go to “work, despite the stress of working in a job that puts you and your loved ones at a higher risk of getting COVID.” He hears it “every single day,” he admitted with a straight face.

Get a grip, man! Nobody can be that cynical, can they?

When Ford and his Tory thugs took office in 2018, one of their first moves was to scrap the two paid sick days that people had fought so hard for. The previous Liberal government under Kathleen Wynne patted themselves on the back for passing that legislation and giving workers a “measly two paid sick days,” as NDP Leader Andrea Horwath recently put it. And, yes, it was only two days – measly indeed – but it was two more than nothing. And Ford took that away, as well as the scheduled increase to a $15/hr minimum wage.

Immediately, all kinds of labour and migrant and student and socialist and grassroots groups lobbied the Ford government, pleading to at least reinstate those two days. The Decent Work and Health Network has been one of the most vocal advocates, constantly putting pressure on the government through days of actions, press conferences, reports, open letters, you name it. Their scientifically-informed work (its members are healthcare workers and trainees) has formed clear demands around it: seven permanent paid sick days throughout the year as well 14 extra ones during a crisis. From the onset of the pandemic, these groups have redoubled their already doubled efforts, demanding paid sick days and calling out the government for ignoring the experts.

But for the past three years, Ford and his cronies have done everything in their power to discredit these groups fighting for paid sick days on the streets and to shoot down any proposed bills in the legislature. As recently as March 1, in fact, 50 of their 71 MPPs voted against an NDP bill for paid sick days.

Now, after having outright ignored his experts’ advice telling him to implement job protections rather than increase punitive measures – choosing instead to give police broad carding powers – he shows up with his tail between his legs, claiming, “sorry...we acted too fast”?

There was no contriteness, much less sincerity, in his voice. But there was some kind of...fear, perhaps, or a lack of confidence. He sounded flat, like he had trouble believing his own words. “We were the first in so many areas...there’s a lot of things that are moving in the right direction...I always listen to my doctors....I have different views than many doctors...it’s all about mobility...we corrected (mistakes) immediately...we moved too quickly with having people pulled over, per se...I never directed police – never will...thank god (numbers haven’t risen) because of our efforts...most strict restrictions in all of North America...I’m not a believer in curfews” or “draconian measures” (like the Australian lockdowns which have kept their numbers way lower)...

And back and forth, and on and on, he went, spittin’ lies and spinnin’ tales.

The reporters, it seems, were having none of it. They outright pressed him – rightfully so – on just what the hell he was sorry for – “sorry for what, exactly?” one asked. Another asked how, despite showing “raging ineptitude,” he could still believe he had “moral authority” to lead. “Why should people trust you to lead us out of the third wave when your government is responsible for bringing us into the third wave?” he asked as a follow-up. And, of course, they pressed him on his vague but self-aggrandizing announcement about some kind of sick leave policy. “The previous government brought in a paid sick day program...One of the first things your government did was kill that program. You’re at home right now. You have the luxury to do that – gaining $800 a day or around there. And these folks don’t qualify for anything more than $450...Do you regret the decision to cut that program initially?” one journalist asked.

A la Trump, all Ford said was that this was going to be the “best program in all of North America.” Other provinces, such as BC, he said, had already implemented their own paid sick day plans before, “but they won’t have the program that we’ll have.”

Of course, there are no details to the program.

As he responded to questions about the sick leave announcement, Ford spent all of his time congratulating himself for supposedly negotiating the first part of the federal government Canada Recovery Sickness Benefit program, then blaming the federal government for not enhancing that program in last Monday’s budget, and then congratulating himself again for supposedly thinking of coming up with what will be in the days to come when they finally announce and unveil what should be.... “the best program in North America.”

Perhaps the only thing that came out of his mouth that I truly believed, and which he probably honestly felt, was when he admitted that he doesn’t “believe in putting the burden on the back of businesses.”

That much, I believe.