COVID case counts are breaking records in the province, projections are even worse, and public health officials, advocates and municipal politicians are calling for paid sick days. But, the Ontario government points only to the federal benefit, CRSB.
by
David Gray-Donald 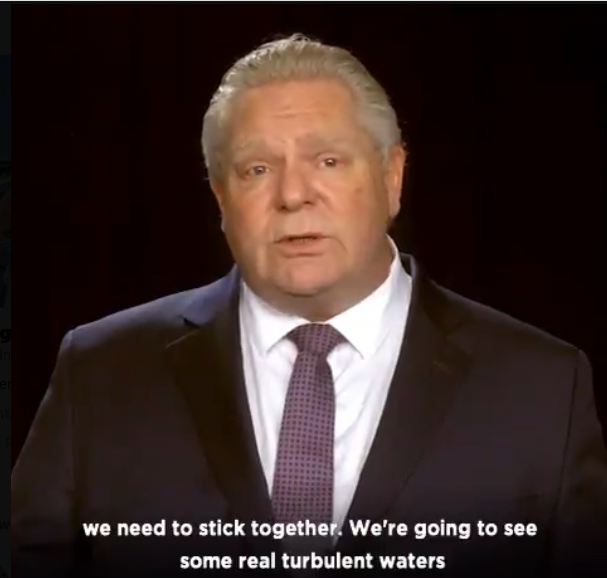 Ten months into the pandemic, Ontario still does not ensure workers in the province can take paid sick days if they are ill.
The Media Co-op asked the Ontario PC government if they plan to introduce paid sick days legislation, as has been called for by public health officials and others.
Harry Godfrey, Press Secretary to Labour Minister Monte McNaughton, pointed only to measures announced in July 2020 and earlier, which include the Canada Recovery Sickness Benefit (CRSB). The statement was received in the afternoon of Monday, January 11th.
No new legislation was mentioned.
The CRSB is the federal government's attempt to offer a limited version of paid sick leave, accessible by application only, rather than being seamlessly required of employers. The program pays $500 per week, which is less than someone working 40 hours a week at Ontario's minimum wage would make. It is not open to people who earned less than $5,000 last year, and crucially, CRSB can only be applied for after the employee has had to miss sufficient work with symptoms of illness. This means employees have to miss work, and miss enough work, and then they can apply for CRSB, then wait and eventually receive payment.
CRSB was expected to have five million applications, but based on applications to date, the program is nowhere near that level.
There are concerns that relying on CRSB means that rather than taking sick days, workers are still being pushed into work, and are going in with COVID symptoms, contributing to the spread of the deadly disease.
While Godfrey, the Ministry of Labour spokesperson, tells The Media Co-op the federal program means workers "do not have to choose between going to work and putting food on the table," the reality is not so clear.
As Heather Scofield wrote recently in the Toronto Star:

"Even with all the federal money and workplace safety rules in place, many low-wage workers still believe their livelihoods are at risk if they were to stay home sick, [Canadian Labour Congress social and economic policy director Chris Roberts and Workers' Action centre executive director Deena Ladd] both say, because the power relationship between boss and employee is stronger than any government benefit.

'Low-paid workers are having to make some very, very difficult choices,' said Roberts. 'Many workers just don’t have the luxury of staying away from work.'"

The Ontario PC government's refusal to introduce paid sick day legislation is coming up against an increasingly loud chorus.
Workers and their unions have been calling for paid sick days since before the pandemic. Soon after taking office in 2018, Doug Ford's PC government took away the two paid sick days that had been introduced a year earlier, in 2018, by the Liberals, who had been in power since 2003. Two days was considered low, with labour groups like the Workers' Action Centre calling for seven or more. Federally regulated industries currently have three paid sick days per year.
In recent months and weeks, public health officials have called on governments to introduce paid sick days as a way to curb soaring COVID cases, hospitalizations, lasting health effects, and deaths. This has included the chief public health officers of Canada and Ontario, as well as municipal public health officials of Ontario cities, including most recently Toronto's.
A number of labour groups are lining up in favour of Bill 239, the Stay Home If You Are Sick Act, 2020, introduced by NDP MPP Peggy Sattler. The bill, named after a common Doug Ford expression, calls for seven days of paid sick leave and three days unpaid, per year, and up to fourteen paid sick days during a pandemic.
The Ontario Federation of Labour backs the legislation, as does the Ontario Chamber of Commerce, a pro-business group with a long track record of opposing pro-labour measures like paid sick days.
Premier Doug Ford continually says "everything is on the table," and warns of even higher case counts in projections, yet his government keeps refusing to provide paid sick days legislation.
The health and safety of hundreds of thousands, if not millions, of workers depends on being able to win this demand.