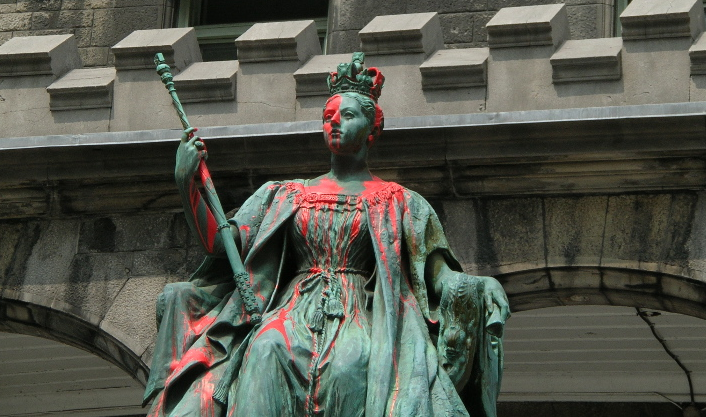 On the morning of Thursday September 30th, a small number of police revolted in Quito, as well as in Guayaquil and Cuenca, in opposition to the Public Service Law that, according to the protesters, put their wages and various benefits in jeopardy. When President Rafael Correa showed up at the barracks of the First Regiment in Quito which had been taken by the rebels, he was booed, soaked with water and tear gassed, and then retained for a period of hours in the National Police Hospital. The police also took over the National Assembly impeding its normal operations, and soldiers from the Air Force occupied the international airport in Quito.

As the hours passed, the police revolt became a political and institutional crisis that forced the President to declare a state of exception and later on, to negotiate with representatives of the police in order to find a way out of the crisis. In the strictest sense, this was not a coup d'Ã©tat, although the sensitization of the left following events in Honduras over year ago justified the sense of alarm. It was Lula who was first to grasp that things would not go off track and that the police protest would remain just that, apart from the exaggerated, exacerbated and disproportionate – in addition to illegal and unconstitutional – nature of their actions.

The crisis has given us several lessons. First, the tremendous response from UNASUR, which was capable of meeting within a few hours to truncate the Ecuadorian crisis and channel it in a similar manner to which it had done two years earlier when the right wing in Bolivia sought to put the government of Evo Morales in check. The rapid call for a UNASUR presidents' summit, happening against the clock and coming about the very same night of the 30th in Buenos Aires, is a clear demonstration that we live in a new age when coups, in whatever form, no longer stick.

The second is that the region is taking on its own form, that it now has the maturity that permits it to take on complex situations that go beyond the differences between the governments of which it is made up. The rapid response of all of the governments involved is one of the best pieces of news. Colombia and Peru demonstrated their support for Correa right from the start, closing their borders and leaving aside antagonism and differences, showing that there is more that unites them than separates them. One cannot forget that less than two years ago, Ecuador and Colombia broke off diplomatic relations over the bombing of Raul Reyes' camp on March 1st 2008.

The third lesson from this crisis is the slow response from the White House, which declared its support for Correa after the Ecuadorian military said it would hold up constitutional order and after the Cuban government urged the US to make a clear declaration.

Moving on from here, regional crises will be resolved in the region. “South America for South Americans” could be the new slogan that captures the political life in this region that is no longer the backyard of anyone. These events confirm the assertion of Brazilian economist JosÃ© Luis Fiori in his article published in the newspaper Valor (29-IX-2010), in which he alerted that the region is experiencing an “intellectual revolution,” that “has consolidated a new way for the continent to see itself and the world, and to see its own challenges as opportunities and options, which should be seen as part of its own identity and own interests.”

The key leaders of the region are no longer thinking, nor should they, on the basis of their relationship with centres of power that are going through a deep and prolonged crisis, but rather on the basis of their own interests. In Ecuador, not even the most retrograde right wing, such as that led by the Mayor of Guayaquil Jaime Nebot was capable of putting his support behind the rebels.

Finally, the crisis leaves another important lesson. The governmental forces for change, or the “Citizen's Revolution” in the case of Ecuador, cannot alienate itself from the indispensable support of social movements. President Correa has been at odds with the indigenous movement, unions and the most diverse collectives. Certainly, they maintain very different positions on important issues such as the use of water by multinational mining companies and for other reasons linked to the country's development model. But on various occasions, Correa has raised the tone of the confrontation, unnecessarily attacking social leaders with accusations that are out of place.

The communiquÃ© from the Confederation of Indigenous Nationalities of Ecuador (CONAIE) speaks for itself. It accuses Correa of having been determined to attack and delegitimize social movements without having altered the structures that keep the power of the right intact. This attitude has done nothing more than favour the old right, as much in economic as in political terms. “For us, this is a very uncomfortable situation,” stated a leader of the water assembly from the province of Azuay by phone, “given that we're up against the right wing establishment that wants to get rid of Correa, but we're also up against the new right wing that the President represents, for which reason we are working toward bringing down this model that is still neoliberal.”

Perhaps this explains why there were no mass mobilizations supporting the “Citizen's Revolution” in the same way that there were in Venezuela in 2002 in order to reverse the coup against Hugo ChÃ¡vez, or those in September 2008 that brought down the right in Bolivia. The solitude of a power that proclaims itself the maker of change and the incarnation of popular will, shows that something is not being done well. The temptation to govern for the population but without it, putting a lid on criticisms with discourse, is bread for today and abandonment for tomorrow.

This article was originally featured in La Jornada. Translated by the Ecuador Solidarity Network.