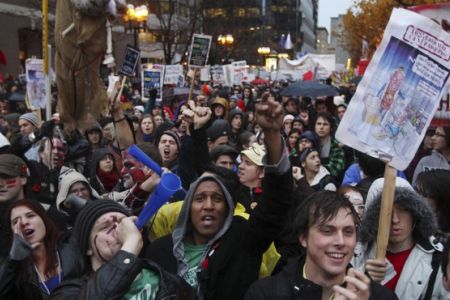 The AUS Mobilization Committee has collected and submitted hundreds of
signatures in support of a General Assembly of the Society on Tuesday,
January 24, 2012. This GA represents an essential first step toward a
student strike at McGill in opposition to the Quebec government’s planned
tuition hike.

Several critical motions will be on the agenda. The GA will debate and
vote on giving the AUS a mandate to join the Coalition large de
l’Association pour une solidaritÃ© syndicale Ã©tudiante (CLASSE), a
Quebec-wide coalition of student associations that have joined together to
fight the tuition hike this winter. Joining CLASSE will give McGill students
a voice in the upcoming struggle to block the $1625 tuition hike, including
when negotiations begin between CLASSE and the government.

Another motion would have the AUS take an official position in support of
free education and against all tuition hikes. This stance is a requirement
for joining CLASSE and, further, will signal to the McGill administration
and their allies in the Quebec government that Arts students reject the
commodification of education and will defend accessible education for all.

Finally, students will debate a motion to mandate the AUS to recognize a
Strike Committee empowered to prepare the Society for a strike vote by
producing and disseminating information on the tuition hike and on an
unlimited general strike, holding consultative forums, and updating the
membership on its progress via weekly listserv emails. Once 50,000 Quebec
students are on strike, the AUS Strike Committee would have the power to
call a strike vote upon collecting 200 signatures.

The General Assembly on Jan. 24 will occur a week before Arts students
vote in a referendum to amend the AUS Constitution to make the General
Assembly the supreme governing body of the Society, so that the AUS meets
the eligibility requirements of CLASSE. The AUS Mobilization Committee aims
to confirm AUS adherence to CLASSE at the CLASSE Congress of Feb. 4-5.