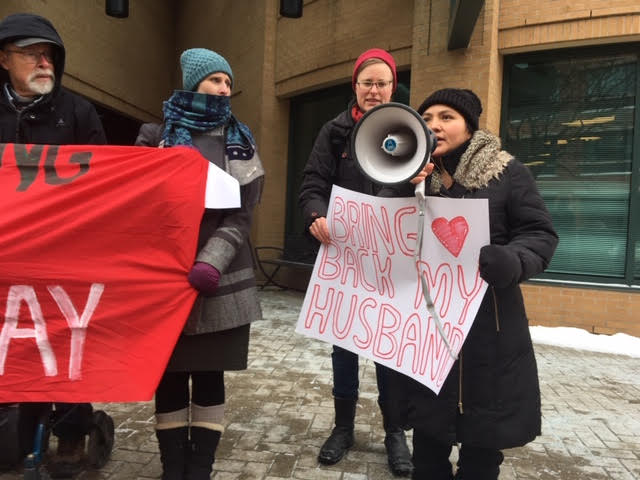 Today we speak with Stacey Gomez, a member of No One is Illegal Halifax/K’jipuktuk, and one of the many people working to support the Roblero Morales family as they struggle through the difficult process of seeking asylum and permanent residency from the Canadian state.

In the spring of 2017 the Roblero Morales family crossed the border from the United States and made a refugee claim.  While the family has been welcomed by communities in Waterloo, Ontario where they have been living, the canadian government has not been as welcoming, first denying them refugee status, then, on November 2nd 2019, deporting the father in the family Daniel Roblero to Guatemala, a country where he fears for his safety.

Weeks prior to his deportation, Daniel was arrested by the Waterloo regional police while driving his children to school. The police then handed Daniel over to the canadian border agents and after hunting down the rest of the family, the canadian state detained the whole family. While Sandra and 5 of the family's children were released within a few hours, an 18 year old son was locked away for 48 hours, while Daniel was locked in a detention centre until his deportation.

On December 19th a demonstration in support of the Roblero Morales family was held at the offices of Kitchener-Waterloo member of parliament and the minister of "diversity, youth, and inclusion", Bardish Chagger. Concerned community members and groups such as LSPIRG, Our Time KW, and the Alliance Against Poverty participated in the action where they delivered an over-sized christmas card asking the minister to support the family and allow Daniel to return to Canada. Despite the family being separated (potentially for years), being already denied refugee status, traumatized by detention, and facing a dangerous and uncertain future, Chagger told local news outlets that the system was "fair and compassionate".

Supporters of the Roblero Morales family have asked folks to contact Immigration Minister Marco Mendicino, Public Safety Minister Bill Blair, and their local MPs to ask them to grant the family residency and to stop their deportation.

While still waiting for their residency application under humanitarian and compassionate grounds to be decided upon, the family did receive a minor reprieve when immigration officials agreed to not deport other family members until their "pre-removal risk assessment" was resolved, a process which could take years.

Other calls to action to support the Roblero Morales Family:

CC your local MP. You can find their information here: https://www.ourcommons.ca/Members/en

If you live in Kitchener-Waterloo, contact MP Bardish Chagger (Minister of Diversity, Inclusion and Youth) calling on her to raise this issue with the Ministers (as the family lives in her riding and she’s a Liberal MP)

No One is Illegal Halifax: