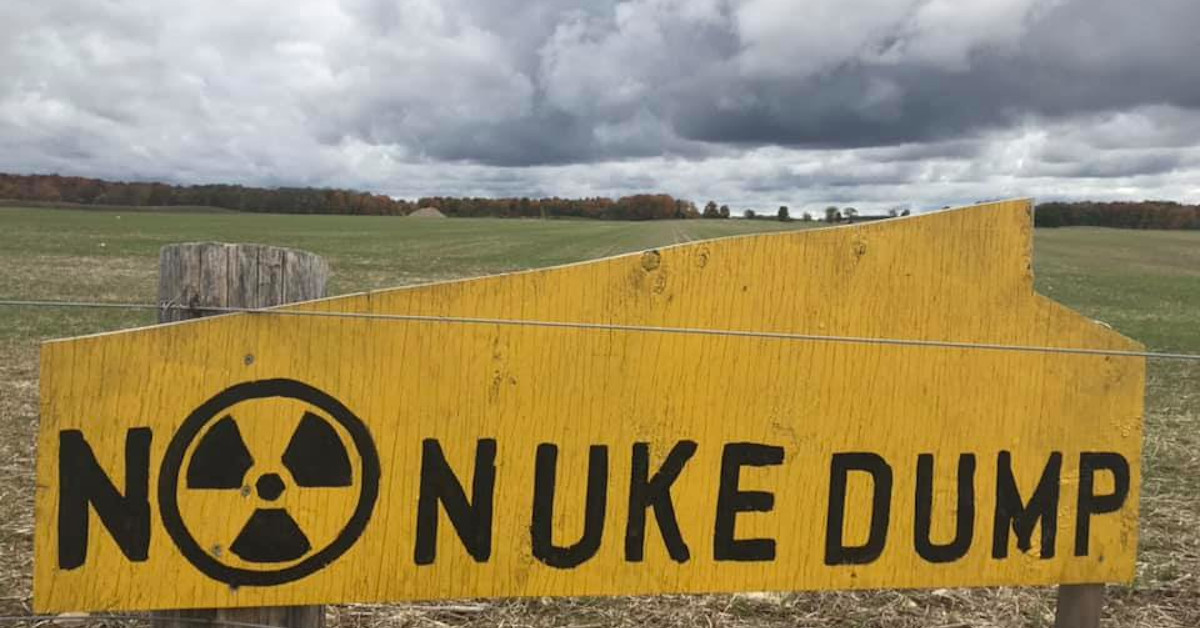 Michelle Stein and Bill Noll are members of Protect Our Waterways – No Nuclear Waste, a group of concerned residents of South Bruce, Ontario, who have come together in opposition to the proposal to put a high-level radioactive waste storage facility in their community. Stein and her husband raise cattle and sheep on their farm, which sits next to the proposed site. And Noll is a retired engineer who lives right across from the site. Scott Neigh interviews them about their concerns with the proposed facility and their campaign to stop it.

Since the dawn of the nuclear age in the 1940s, humanity has faced stark questions of risk and safety. Some of those questions have to do with the dangers of acute catastrophe, but others are about the less dramatic but no less serious risk posed by the waste that the nuclear industry generates. Among the most challenging of that waste to deal with – designated “high-level radioactive waste” by the industry – is spent fuel bundles from nuclear reactors. Comprised of a highly toxic and radioactive mix of isotopes, the material in these bundles will be dangerous to living things for at the very least hundreds of thousands of years.

Though it has been decades since the industry first started producing radioactive waste, there has yet to be a fully satisfactory answer to the question of what to do with it. The organization currently tasked with figuring that out for the millions of used nuclear fuel bundles in the Canadian context is the Nuclear Waste Management Organization (NWMO). Currently, used fuel bundles are kept in interim storage facilities on reactor sites, but the long-term plan is to put them in a “deep geological repository” (DGR), a location that is deep underground and geologically stable. A number of countries are currently developing DGRs for high-level radioactive waste, but none are currently operational.

The NWMO is in the middle of an elaborate selection process to find a site for both the plant that will repackage the fuel bundles for long-term storage and the storage facility itself. They began with 22 possible host communities in 2010 – mostly, it should be noted, small financially distressed communities – and they have narrowed their possibilities down to two, Ignace in northwestern Ontario and South Bruce in southern Ontario, near Lake Huron. They hope to announce their decision in 2023.

The concerns that Stein, Noll, and other members of their group have with the facility are many. Despite assurances from the NWMO that it will all be safe, their own investigation of processes for transporting and storing nuclear waste around the world have convinced them that very real risks remain under the NWMO’s plans. They fear that the facility could endanger human and environmental health, local agriculture, local drinking water, and the larger Great Lakes basin. And they argue that it is not just about their community being the wrong choice, but that the whole approach is flawed.

Moreover, they are quite concerned about the process. They have identified a pattern of what they say is incomplete and one-sided information from the NWMO, and a process that takes advantage of communities by downplaying risk and promising economic benefits that they say seem unlikely. The NWMO insists that whatever community ends up hosting the DGR must be willing, but they have refused to clarify exactly what that means.

Much of the group’s work has focused on mounting a local grassroots response to the slick and well-funded PR efforts of the NWMO. Before COVID, that involved knocking on doors. They’ve brought in speakers and hosted events, lobbied politicians, done media work, and made presentations to other local organizations. Last summer, they presented a petition against the DGR with signatures from more than 1500 residents to the local municipal council – and to put that in perspective, the current mayor got fewer votes than that in the last local election. They commissioned Mainstreet Research to do an opinion survey that found 64% of local residents would vote against locating a DGR for high-level radioactive waste in the community. The group is demanding a binding referendum on the issue.

Stein said, “Since they won’t give us a definition of what ‘willing’ is, we are going to just continue to show them what ‘not willing’ looks like.”

Image: Used with permission of Protect Our Waterways – No Nuclear Waste.