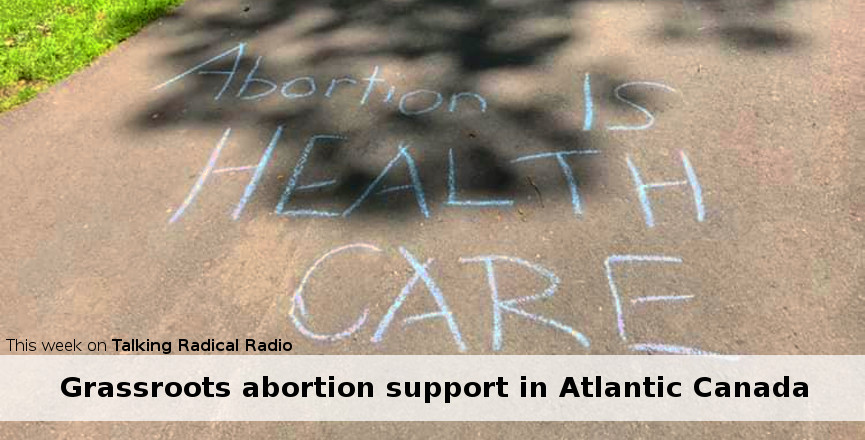 Shannon Hardy and Bridget Graham live in Halifax and work as doulas. They are also, respectively, the coordinator and the director of volunteers of Abortion Support Services Atlantic, a volunteer-run group that exists to provide support to people in Atlantic Canada who are trying to get an abortion. Scott Neigh interviews them about the barriers that people face in accessing abortion services, and about their group's grassroots, mutual aid response to those barriers.

While abortion has been decriminalized in Canada since 1988, that does not mean that accessing abortion services is necessarily an easy or smooth process for everyone who needs one. For some of the cisgender women, trans men, and other gender-diverse people who do so, it can be difficult to find information about how abortion services work, and where and how to access them. In some parts of the country, there are few or even no providers of abortion services, so some people have to travel long distances. The expense and logistcal challenges involved, in some instances in combination with out-of-pocket fees for the services, can be a barrier for low-income people and people marginalized in other ways. And abortion still carries significant stigma, which can make it harder for people to access the kinds of formal and informal supports that they might otherwise draw on to overcome barriers.

Back in 2012, Shannon Hardy was a birth doula -- that is, someone who provides guidance and support during labour -- and she was working as the education coordinator at an education-oriented sex shop and book store in Halifax. She got an email about a pro-reproductive rights rally related to abortion. Specifically, the rally was because there was not a single provider of abortion services in all of Prince Edward Island. Hardy had no idea that there was a Canadian province or territory that just did not offer this basic element of health care. It made her mad. And that very day, she started rallying friends, comrades, and colleagues to start doing something about it. The original mission was to support people from PEI in getting to abortion appointments in Halifax, through offering rides and helping with accommodations.

From there, it all just sort of grew. They got more and more requests for support from an ever-broadening range of people, and developed a growing network of volunteers to meet those requests. They started doing some fundraising. Hardy developed a training that she has given in many different places to those who want to support people having abortions – attending a training was how Bridget Graham, who is also a doula, first got involved. For awhile, the scope of the network was just the Maritimes, but they developed a presence in Newfoundland and Labrador in 2017 and took on the name Abortion Support Services Atlantic. For several years, Hardy did almost all of the work guiding and coordinating the group, but about two years ago they put together a board of directors with members from across Atlantic Canada. From being a response to one specific need, the organization ended up becoming, as its Facebook page says, "a 100% volunteer run, pro-reproductive rights group, providing support for anyone having an abortion in the Atlantic provinces."

The kinds of support they offer have remained quite similar. Often, people who contact them are looking for information related to abortion services, so the group's work can be as simple as providing it. It's also not unusual for them to get messages from people far beyond Atlantic Canada, and over the years they have developed a network of contacts that can offer information and support relevant to places around the world. Much of what they do, however, continues to involve rides, accommodations, and other forms of practical support for people accessing abortion services in Atlantic Canada.

Though it is a little bit less direct, Graham and Hardy say that resisting stigma is also an important element of the organization's work. The word "abortion" is prominently present in the group's name, and in its communications and in the activities of its lead activists they are very up-front about what the group is about. They believe that even just using the word unapologetically, and broadcasting far and wide that they offer matter-of-fact, compassionate support, helps some people push back against the insidious power of stigma and shame. Hardy says, "Just the fact that we exist, I think, is a form of harm reduction."

Talking Radical Radio brings you grassroots voices from across Canada, giving you the chance to hear many different people that are facing many different struggles talk about what they do, why they do it, and how they do it, in the belief that such listening is a crucial step in strengthening all of our efforts to change the world. To learn more about the show check out their website here. You can also follow us on Facebook or Twitter, or contact scottneigh@talkingradical.ca to join their weekly email update list.