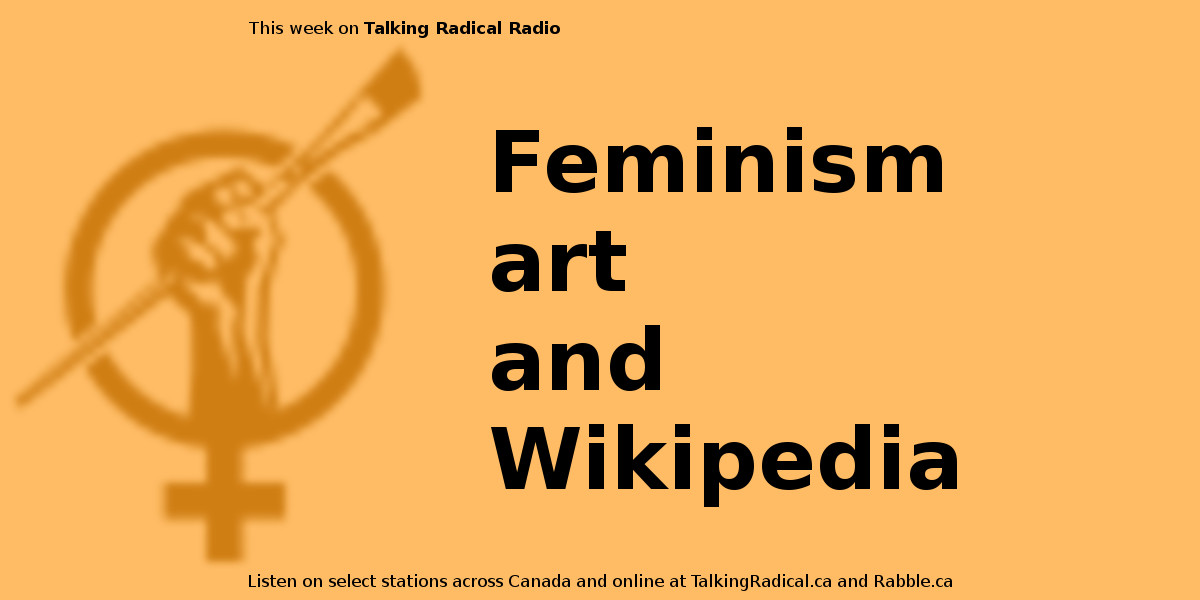 On this week's episode of Talking Radical Radio, Scott Neigh speaks with Areum Kim and Amber Berson. They have been active in organizing participation in Canadian cities in the global Art and Feminism campaign. Art and Feminism is working, with particular reference to feminism and the arts, to challenge the huge gender gap among the people who contribute to Wikipedia and the skewed content that results from women being so significantly underrepresented.

There was a lot of rhetoric in the early years of the internet about how it was going to be a radically democratizing and equalizing force. This has, unfortunately, proven to be rather dramatically untrue, as the many marginalizations, exlcusions, and hierarchies that shape our offline communities end up manifesting in pretty much all of our online spaces as well.

One of the sites that sounds like it should best embody the open, participatory potential of the online world is Wikipedia -- a massive, ever-growing online encyclopedia to which anyone can contribute, under various standards established by the community that creates it. Yet a survey by Wikipedia itself in 2011 found that 90% of the people involved in creating and editing entries on the site identified as men. As today's guests describe, this inequity has consequences for what knowledge ends up on the site.

In the years since the original survey, there have been a variety of initiatives to understand, challenge, and change this gender inequity, with some success though a long way to go -- according to one of today's guests, the most recent stats indicate that the percentage of woman-identified Wikipedia editors has gone up from less than 10% to 16%.

Art and Feminism is one such initiative. It began in 2014 when four individuals living in the United States -- Jacqueline Mabey, SiÃ¢n Evans, Michael Mandiberg, and Laurel Ptak -- got together to brainstorm what they could do about this gender gap. All four had been working with Wikipedia, and all were involved in one way or another with both the arts world and with feminist politics.

The tool they settled on for tackling the issue was the "meet-up." This sort of informal, in-person gathering of people to work together on Wikipedia has been happening as long as the platform has been around. The vision of Art and Feminism's founders was to tweak this established community practice by getting people to organize meet-ups specifically designed to create an opportunity for more people, particularly more women, to learn how to use the site and to begin contributing content to Wikipedia -- particularly content related to feminism and the arts. They began with a handful of meet-ups on International Women's Day in 2014, but the project has grown quickly, and March of 2017 saw more than 300 Art and Feminism events in cities around the world.

Areum Kim is the assisstant director of the Stride Gallery, an artist run centre in Calgary, Alberta, and is a writer and curator whose work focuses on intersectional feminist ideas. Amber Berson, who currenly lives in Montreal, came to the arts and to working in artist run centres through a background in social justice work. She is currently working on a PhD studying feminism in artist run centres. Both Kim and Berson have been involved in organizing Art & Feminism meet-ups in their respective cities, and Berson is the regional ambassador for Canada for the Art & Feminism project.

Kim and Berson speak with me about the causes and implications of the gender gap in Wikipedia, and about the ways that the Art and Feminism project has been working to address them.

You can find more information on Art and Feminism here.

Talking Radical Radio brings you grassroots voices from across Canada. We give you the chance to hear many different people that are facing many different struggles talk about what they do, why they do it, and how they do it, in the belief that such listening is a crucial step in strengthening all of our efforts to change the world. To learn more about the show check out its website here. You can also follow us on FaceBook or Twitter, or contact scottneigh@talkingradical.ca to join our weekly email update list.

Talking Radical Radio is brought to you by Scott Neigh, a writer, media producer, and activist based in Hamilton (formerly Sudbury), Ontario, and the author of two books examining Canadian history through the stories of activists.

The image modified for use in this post was created by Ilotaha13 and is used under the Creative Commons Attribution-Share Alike 4.0 International license.