In my own voice: Sandra Moran visiting the Maritimes

In my own voice: Sandra Moran visiting the Maritimes 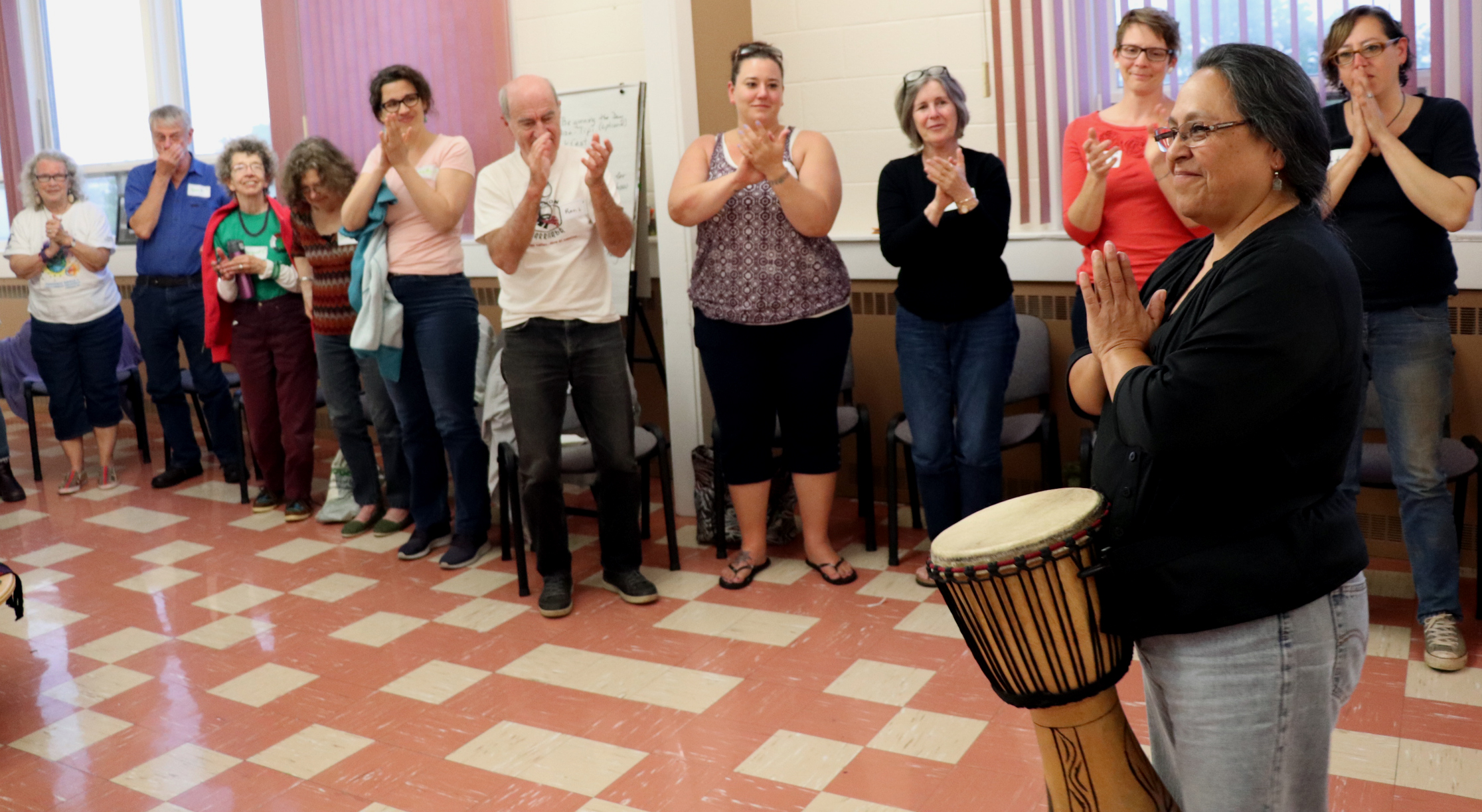 In My Own Voice-Sandra Moran in the Maritimes

Stacey: Can you share some of the political context in Guatemala, for those who may not be familiar?

Sandra: Yes, thank you. Well, we had an armed conflict during 36 years and that ended in 1996. We had peace agreements and then we felt that that was a new tool for the social movements to get organized around the peace accords and to try to push for those to be accomplished. Then, around 2000, we discovered or came to the conclusion that the government who signed them didn't want to accomplish the peace accords. They really wanted to open the country to do business and they have done it through the years. We have NAFTA (the North American Free Trade Agreement). We have all these agreements with mining companies and this extractivist model that is not good for us as a country and for us as people. Then the resistance really started in Guatemala against those kind of projects because people discovered that the Guatemalan government, throughout the years, was giving permission and they didn't know about it. Or, they knew, but they didn't exactly have the real information. And, they felt that was going to affect their water and land. And, they already had the experience of people in San Marcos, one of the big mining projects that we can see how they do the work. Then, from that, the communities in resistance starting working and defending their land. And, then Indigenous peoples really started the process of reorganizing themselves as nations and not just in the social movements, but as nations, as a people who wanted to recover their own governance structures. And, Guatemala is a country where the Indigenous people, the Mayan people, are the majority of the population, but also it's very alive. But, to recover the way they were organizing before is very important and is new now and it's getting bigger. Then also, we as women, as feminists, we have been making alliances with different movements at the national level and we also have been discussing among ourselves and defining the feminisms that there are in Guatemala. It's not just one feminism, it's different feminisms. And, that has been very important for us, to see, to acknowledge differences between us, but we can build a movement from there. Anyways, we have been, for the last 10 years, we have been building alliances, discussing what we are building in our country, what we want to build and we continue with the struggles against corruption that is very big now and the struggles against impunity, that also are connected with the corruption, and also defending the land, that is also connected with the corruption. Those are the ones which are the big battles in Guatemala and now we have new people, that are youth, that have been organized since 2015 very strongly. And, I think that we also have citizens that care about what's going on in their territory, in the local, regional and national level.

Stacey: How did you decide to go into office after so many years of being in social movements?

Sandra: Well, exactly because in 2015 the way that we understood the moment that we were living in was calling us to open other spaces or to participate in other ways. I was invited by a political party Convergencia as a candidate. I wasn't part of the political party. I had friends there, but I wasn't part of it and they decided that it was the moment to invite people from the social movements and they invited us: Leocadio from the campesino [peasant] movement, myself for the women's movement and both of us also in relationship with the Indigenous movement. But, also there were people from the different parts of the country, as Mayan people, as candidates. Anyway, that was the beginning of this path and I was elected. That probably was the moment to do it because I ran as a candidate and people were looking for something new, something different, and then we were elected because of that.

Sandra: Yes, well, I wasn't in the closet, but I wasn't as public as I am now. And, the first thing that I decided to do was to go public. And, I did it during the campaign, but I was bigger after I won because I knew that they would use it against me. Then, I decided to do it. Then also I also decided that I have a commitment to the LGBTQ community to open doors for them, for us, and to represent also the community. And, with them write laws that can talk about their rights. Then, I've been doing it. And, I presented two laws. One about trying to prevent the violence that the communities live. There's a lot of violence, a lot of homophobia, transphobia, lesbophobia that affects the life and the dignity and the rights of those people. But, I felt that also that they felt that finally they have someone to talk with that can represent them and it's the first time that the issues of the LGBT community are being discussed in Guatemala and at the level of the congress. That's the first time. Also, I'm working with the human rights commission in the executive to have a public policy for the LGBT community and that public policy talks about the rights for education, health, work and probably people can say why and how those things are not there in Guatemala. But, yeah, that's true, that's why we need to work on that because the majority of people still live in the closet. Then, the LGBT community and movement is not so big. But, the good thing is that other social movements recognize it as part of the social movements and that has been probably for the last 15 years and that's very good.

Stacey: What do you see as the relationship between music and political change?

Sandra: Well, for me, it has been my way of communicating with people. I like music. I learned how to do it and I feel that it's a powerful tool to communicate and I was part of Kin Lalat. Actually, I started in Mexico with another group called Katinamit. Then, in 86 I joined Kin Lalat and that's why I came here. And, then, when I went back to Guatemala, I went back by myself and then I decided to start doing the work that I'm doing now, poetry and drums, because I wanted to continue somehow and I discovered myself that that's one way to do it. Because, I don't sing a lot. Like, I do. I like it, but my work is better by spoken word and with the relationship with the drum, it is very big. I started developing that kind of work. I like it. In my own voice is the name of the film, but also it's the name of my CD. It's really the decision that I took, no? In my own voice. I've been doing it since 1995 in that way. Then, I started doing music as part of my revolutionary commitment in 82.

Stacey: Thank you. So, you participated in the blanket exercise recently and also had the chance to visit the Treaty Camp resisting Alton Gas. So, I wanted to hear your thoughts about how you see the situation in Guatemala, as compared to here in terms of Indigenous rights.

Sandra: Well, I think that, I feel that the world is changing in the way that the social movements and communities are finally listening to the voices of the Indigenous people. They have been talking all the time. They have been telling us all the time. They have been calling us all the time. But, I feel that it's not until now that really people are listening to Indigenous peoples' voices. Really listening to the voices of Indigenous people. I am happy that that is something that is happening. I feel that it's the time. Probably the time has been always, but now is the time [more than] ever because I think that Indigenous people can help the world to find their way to save the planet. And, also to come back to the community level and the community way of living, because I think that's going to be the future, going back to community and going back to the basics and going back to the beauty in the basics. And, I hear that and I feel that the things that are happening here in Canada are the same things that happen everywhere. Like for me to discover that the companies, US companies, Canadian companies, are doing the same thing here in Canada than in Guatemala, you know? And, they are doing it in Africa too. Then, it's the power of the communities that are really looking for the resources, where the resources are. And, they don't care what they destroy, they don't care if that means to lose the water, or if that means to contaminate anything, or if that means to lose food. Whatever. I think that they are looking for the resources and they don't care about anything. That's why we talk about, that we need to build an economy for life and not to continue in the economy for the capital that it is now. Because the economy of capital is destroying life everywhere and I think, in that, the global action is needed. In that, the global alliances are needed and in that, the leading of the Indigenous people is needed. And, I feel that they are the ones who know how to and we need to listen. And, we need to find the way how to do it together.

Stacey: So, tomorrow is your last day. You're traveling tomorrow. You wrapped up the speaking tour. How do you feel that it went? What were some highlights for you?

Sandra: Well, first of all, to come back 30 years later to this territory was very good for me. To find people who I really wanted to meet again, to have more friends, to open doors and to know that people continue in solidarity with Guatemala and wanted to know what's going on and are open to continuing to work together is important and, yeah, to have... I think on this trip, I have more knowledge about Canada and I can understand a little bit more. One highlight is the Indigenous people. I learned history about it. I know the resistance here. And, I know a little bit what's going on and it's good to have also that experience. And, I thank Breaking the Silence in the way that you organized this tour and the people who opened their houses and gave us food and a room to sleep in. And, thank you, mainly for the human relationships.