Standing up against mass firings in BC's hotel industry

Standing up against mass firings in BC's hotel industry 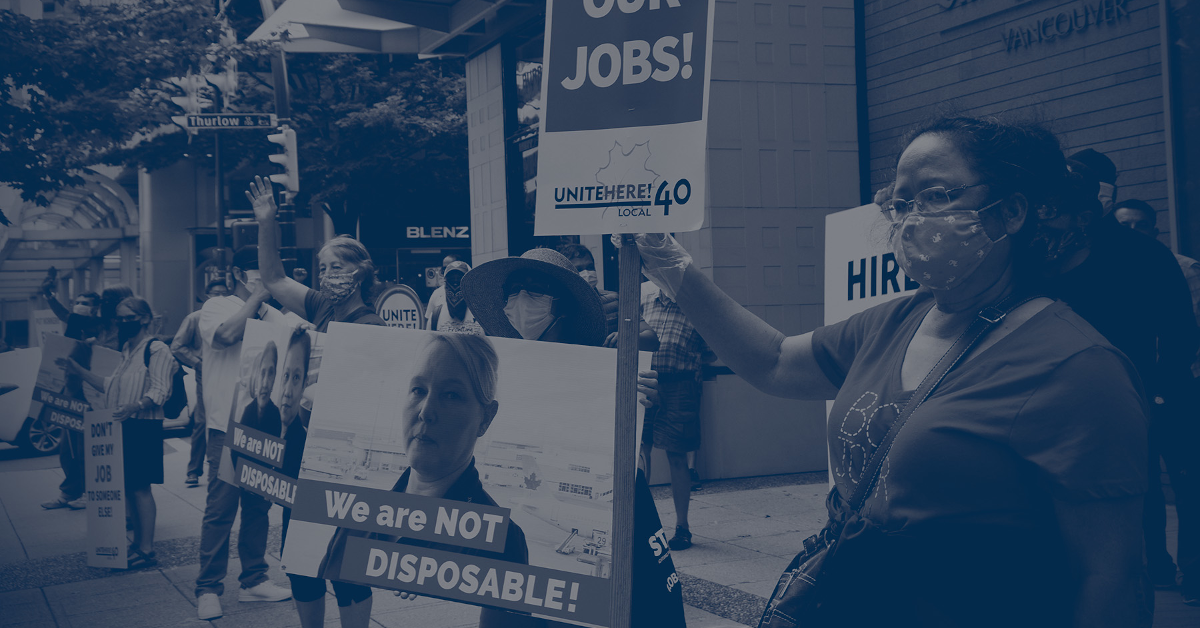 Stephanie Fung is the communications organizer for UNITE HERE Local 40, which represents workers in the hospitality industry in British Columbia. Rajani Tadaka is a hotel worker in Vancouver and a member of Local 40. In the wake of the extensive pandemic-related layoffs in hotels in BC, many employers chose to fire laid off workers rather than recall them as needed. Scott Neigh interviews Fung and Tadaka about the impact of the pandemic, about the mass firings, and about the BC’s Unequal Women campaign, which is pressuring employers and governments to take action to get the mostly-women who have been fired their jobs back.

Tadaka started working at the Pan Pacific hotel in Vancouver in 2015. She was a housekeeper, which meant cleaning, making beds, mopping, dusting, vacuuming, and so on. It was physically demanding work – the pace set by management and the number of rooms assigned per shift meant that it was always stressful and exhausting. But she and her co-workers worked hard and well, and it was a living.

In the industry as a whole in recent years, workers had made some gains. In particular, there were historic wins in strikes at a number of hotels in downtown Vancouver in 2019, which resulted in wage increases, improved job security, better protections against sexual harassment, and more.

But when COVID-19 hit in March 2020, more than 50,000 workers in BC’s hotel sector were laid off. It was a hard moment but one that workers understood, given the public health circumstances. Soon enough, the initial broad pandemic shutdown eased. And while ongoing public health restrictions of fluctuating intensities have meant that hotels have remained less busy than usual, nonetheless many resumed some level of activity very quickly.

It was then that workers and the union started to notice a disturbing trend – rather than recalling their laid off workers when there was work for them to do, some hotels decided to fire them as a way to reduce costs.

At Tadaka’s workplace, she said the initial communications from the employer suggested that they would be recalled as needed. But without warning in June or July 2020, they started firing people. They did it in batches of 20 or so, perhaps to avoid triggering certain employment law provisions that would have required them to give more advance notice or greater compensation. Tadaka said that housekeeping work was initially being done by managers, and then casual, on-call workers were hired through an agency at lower pay than the fired workers.

According to Fung, many hotels are “trying to take advantage of a temporary health crisis to fire their long-term workers in order to cut costs, to save money, and to hire a workforce that will accept cheaper wages.” Shes says this shows the “cruelty” of the employers. The majority of workers impacted by the firings are women, many of them immigrant and/or racialized women.

Workers have been responding to this injustice in a number of ways. This has included action at specific worksites. The workers at Pan Pacific, for example, only voted to join Local 40 last August. Local 40 has been pressuring specific employers, including Pan Pacific and others, to commit to bringing their fired workers back. They are also striking at Pacific Gateway, locked out at Hilton Metrotown, and may be facing job action at other work sites soon. As well, a worker at Pan Pacific has launched a class action lawsuit over how the firings were carried out.

Local 40 launched the BC’s Unequal Women campaign to put pressure on the employers and on the provincial and federal governments. It has involved petitions, letters, lobbying, and other basic tools of advocacy. They have had some success in building support among community groups and other unions, both for specific job actions and for the broader campaign. This has included a call by the BC Federation of Labour for a boycott of the Hilton Metrotown and Pacific Gateway hotels. Last August, the campaign travelled to Victoria and workers held a public hunger strike to demand action from the provincial government. According to Fung, some jurisdictions in the United States have enacted legislation that entitles workers laid off due to the pandemic to be recalled when conditions improve. Canada’s only current NDP government has not chosen to do likewise in BC. And at the federal level, the campaign is drawing attention to the Trudeau government’s rhetoric about a “feminist recovery” from the pandemic, given that the firings are particularly impacting workers who are women and/or racialized. They want him to tie any pandemic subsidies for hotels to rehiring laid off workers.

Local 40 is asking people to learn about and support the campaign at their website. And as public health restrictions continue to ease, they hope that when people travel, they use the lists on the site to ensure they spend their money only at BC hotels that have treated their workers fairly.

Image: Used with permission of the BC’s Unequal Women campaign.