Standing up for students and public education in Alberta

Standing up for students and public education in Alberta 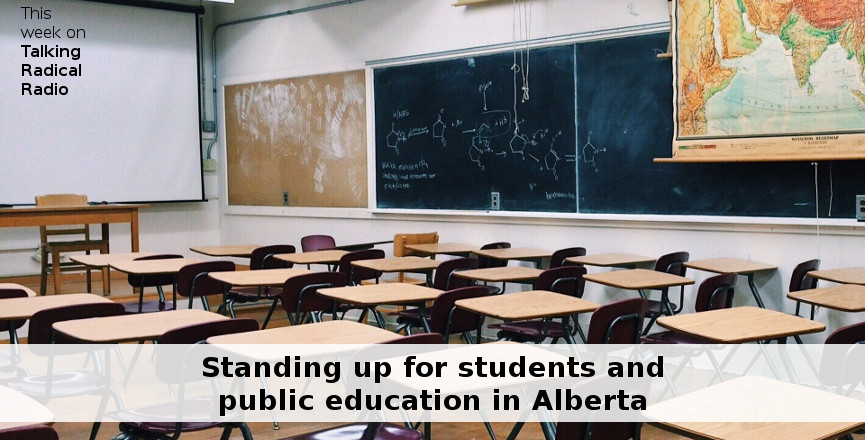 Medeana Moussa is an entrepreneur and mother of four who lives in Calgary, and she is the executive director of Support Our Students (SOS) Alberta. Wing Li holds a PhD in neuroscience, has two children, and is the communications director for the group. SOS Alberta is a grassroots, nonpartisan network focused on standing up for the rights of students to an accessible and equitable public education system. Scott Neigh interviews them about the importance of public education, the dangers of charter schools and privatization, how the school system in Alberta has been responding to COVID-19, and what SOS Alberta is doing in response.

Charter schools are educational institutions that are funded by public money but that exist outside of the public school system, often with a distinct mandate of some kind. They have become common in many jurisdictions in the United States in recent decades, but the only Canadian province to allow them is Alberta, which has had legislation permitting them since 1994. A voucher system for funding education is one in which funding follows the student. Education in Alberta is funded in this way, with about 70% of education dollars moving with the student to the school of their choice.

They further argue that rather than an education system organised on the basis of competition for funding and on exclusivity, we are all better off with a robust, well-funded public education system. Such a system leads to a healthier, safer, and more equal society and is an essential element of a healthy functioning democracy. And if done well, it offers fewer barriers and more opportunities for students who are marginalized in various ways.

SOS Alberta had its origins among parents on public school playgrounds in Calgary in 2015. Moussa discovered it a couple of years later while investigating why her children's school was steadily losing students. Her initial involvement in the group was to host a screening of the documentary film Backpack Full of Cash. The film explores charter schools, voucher funding, and the overall process of privatization in jurisdictions in the United States in a way that the group feels is relevant to Alberta's situation. Li first encountered the group by attending a screening of the documentary about a year ago.

In the group's early years, they did some direct lobbying of provincial politicians. But more recently, their work has focused on educating and mobilizing parents and other Albertans concerned about privatisation and other threats to public education. They make use of social media. They hold viewing parties for Backpack Full of Cash. They do in-person educational sessions. They engage with school councils. And they mobilise people and provide them with tools to do things like write letters and put other forms of pressure on school boards and the province.

COVID-19, of course, has prevented certain kinds of in-person activities and has forced the group to adjust its focus. Though many jurisdictions have been criticized for not doing enough to prepare schools for a safe return of students, teachers, and other workers this past September, Li and Moussa say that Alberta has invested the least of any province and offered little direction and little support for the kinds of safeguards that are needed.

So in addition to their ongoing work, SOS Alberta has put together a COVID-19 school tracker. It gives parents and students much needed information about transmission in schools, and it has become a useful way for the group to connect with people who have concerns about the system. They have also been working in coalition with groups called AB Docs for Patients and RAD Educators to push 12 demands for safer schools during the pandemic.