Challenging anti-Asian racism during the pandemic

Challenging anti-Asian racism during the pandemic 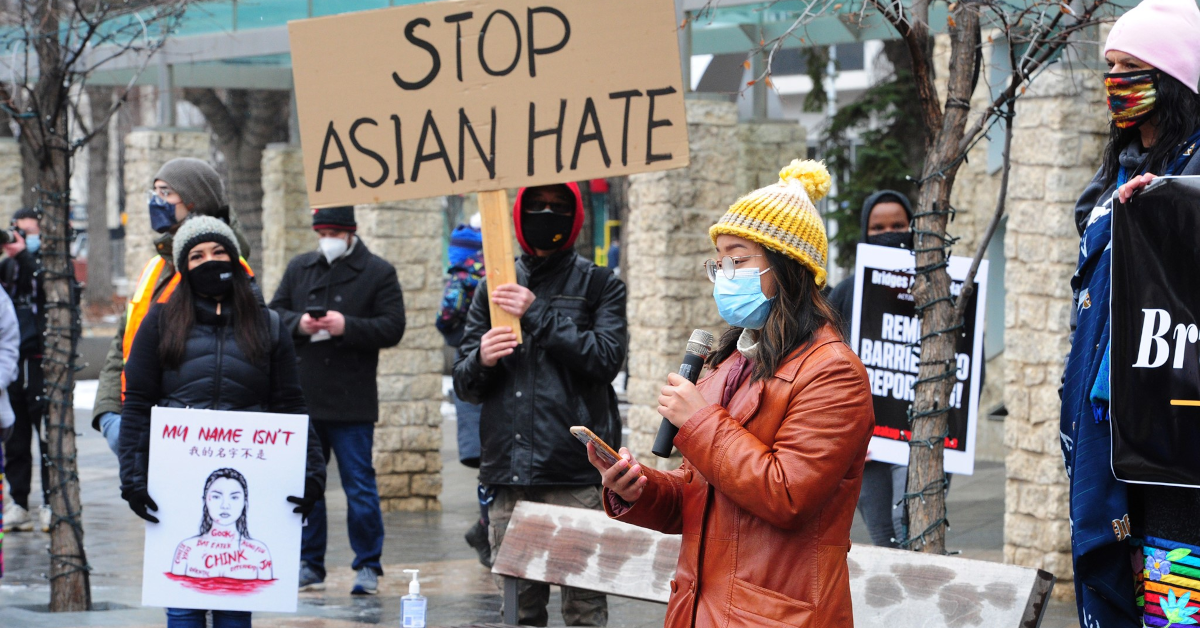 Serena Mah is a media relations consultant and a former television journalist who lives in Edmonton, Alberta. Scott Neigh talks with her about anti-Asian racism, the COVID-19 pandemic, and the Act2EndRacism coalition.

In the early days of the COVID-19 pandemic, Mah got a call from former Alberta MLA Theresa Woo-Paw, based in Calgary, about the rapid upsurge in incidents of anti-Asian racism happening at the time.

Mah is, of course, no stranger to racism, as a first-generation Asian Canadian and child of immigrants. As well, she grew up on a First Nation in Alberta, which meant being in sustained relation with a community with a very different experience of colonialism and racism.

On that call, Woo-Paw talked about what she was hearing from Asian Canadian communities in Alberta and beyond – people being spat at, yelled at, called names, afraid to go to the grocery store. All of this was clearly related to the ways in which popular discourse, deliberately circulated misinformation on social media, and prominent political leaders were blaming China and Chinese people for the pandemic.

Notwithstanding this acute increase, anti-Asian racism has a long history in Canada. Along with the perennial everyday struggles that do not get recorded in history books, there were high profile events like the head tax on Chinese migrants after 1885, anti-Asian riots in Vancouver in 1907, a near total ban on Chinese immigration from 1923 to 1947, and the internment of Japanese and Japanese Canadian people during the Second World War.

In the context of COVID, a study released in June 2021 reported that 58% of Asian Canadians had experienced at least one instance of anti-Asian racism in the preceding year, and more than a quarter faced such situations often or all the time. There was a sharp rise in the narrow category of anti-Asian incidents that qualify as hate crimes – Vancouver, for instance, experienced a shocking 717% increase. A report released by the Chinese Canadian National Council a year into the pandemic identified 1150 acute incidents over the preceding year – 10% involved being coughed or spat on, 11% involved some other kind of physical assault or unwanted contact, and almost three-quarters included verbal harassment.

And then in March 2021, a gunman killed eight people at three Atlanta-area massage parlours, including six Asian women, a tragic and terrifying event that Asian Canadian advocacy groups linked to the broader upsurge in anti-Asian racism (and in particular to histories of sexualized targeting of Asian women along with ongoing systemic injustices faced by migrant sex workers).

Within ten days of that original phone call back in the spring of 2020, individuals and organizations from cities across the country had come together to found Act2EndRacism, a coalition (according to its website) of “concerned citizens and community groups of Asian descent” aiming to build broad unity to tackle racism in the wake of the pandemic.

Ultimately, with just a small amount of government funding along the way, the group has been active in providing community supports, doing research, engaging in education, and developing policy recommendations. This includes setting up a national hotline for reporting instances of anti-Asian racism. This is a way for those who may not wish to go to the police to ensure that their experiences are recorded, and also a way to link survivors to mental health supports. As well, they are using the calls as a way to build a more complete picture of the kinds of things that Asian Canadians are facing – notably, most incidents occur in public spaces, and they disproportionately impact Asian women.

Their educational initiatives include using videos, comics, reports, more videos, and social media. Mah said, “The education is twofold – talking about anti Asian racism to everybody else, but within the community as well about what to do if you encounter racism.” After the Atlanta shootings, Mah was involved in organizing multi-city anti-hate rallies with organizations from a range of other racialized communities. The coalition has engaged in community consultations to develop policy proposals related to anti-racism that they hope to release soon. More recently, they have turned their attention to supporting efforts to preserve the many Chinatowns in cities across the country, whose distinct character is threatened by re-development.

Mah said, “We have been part of Canadian history. We helped build this country. And it’s time that some of our issues hit the headlines and get the the attention that we deserve. It’s time that we take centre stage. And I’m really proud that we’ve created this space.”

Image: Used with permission of Act2EndRacism.