ANALYSIS: Name Them All -- We Need a Public Cop Offender Registry

ANALYSIS: Name Them All -- We Need a Public Cop Offender Registry 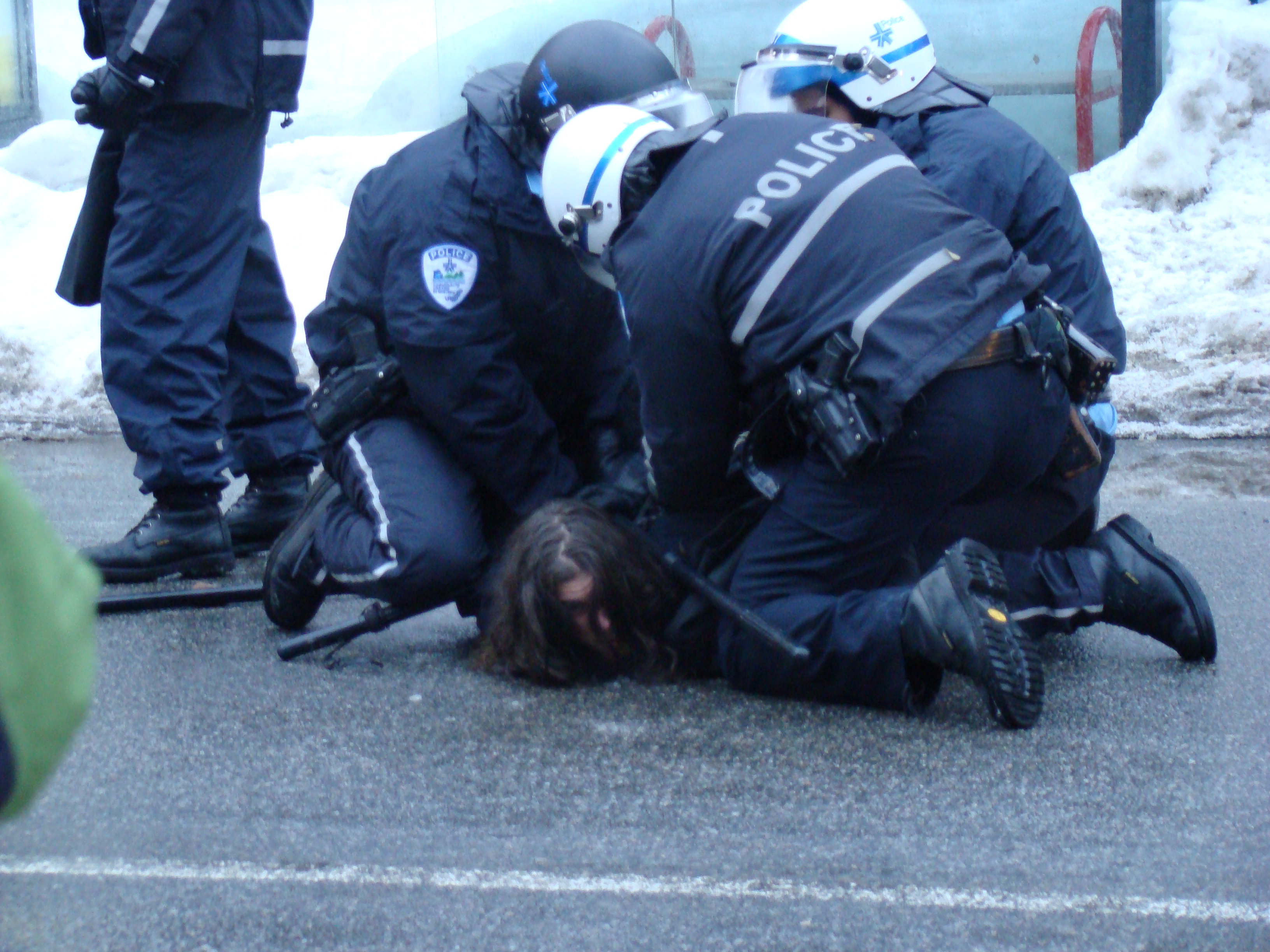 In the first week of November 2021, a report came out that six Toronto police officers had been found guilty of discreditable conduct for making derogatory social media comments about prominent critics of police, who are Black-criminal defence lawyer Selwyn Peters and author Desmond Cole. Notably, the Toronto police report into the officers was kept secret by the force, and was, in fact, never intended to see the light of day. It only became public knowledge when CBC News managed to obtain a copy of the 20-page confidential report.

This secrecy when it comes to matters of police harms—whether racist expressions or acts of lethal force—is part and parcel of policing in Canada. Offending cops are protected by everyday policing processes, from formal internal review practices to the informal blue wall of silence among officers. And it has real, often fatal, effects on people and communities when offending cops are deployed as the state’s monopoly of force.

Communities have every right to know when cops have inflicted specific harms against them and to know the names of the officers specifically responsible. They have every right to know too when repeat offenders are operating in their neighbourhoods and on their streets. Advocates have suggested that any person should be able to look up a police officer’s service record, in the same way that they can for medical doctors. The name of every cop, every complaint against them, and any internal discipline should be public knowledge.

One especially troubling bit of information revealed by the publication of the report is that at least two of the cops were repeat offenders. The officer who made a racist Facebook post, Dave Smith, pleaded guilty on July 24, 2020, to assaulting a Toronto resident. In that case, the victim suffered two leg fractures after being kicked and pushed to the ground. After a Toronto police disciplinary hearing on October 29, 2020, officer Smith was given a six-month reduction in rank classification to second-class constable.

The report also notes that the unnamed officer is being investigated by Peel Regional Police in relation to another active complaint submitted to the Office of the Independent Police Review Director (OIPRD). CBC News reported that that complaint relates to an alleged assault of a 24-year-old man of Middle Eastern descent. The officer in question has not been found guilty in relation to this assault allegation.

This is not at all surprising. Given the lack of any real, meaningful oversight of policing and the secrecy of investigations, of course cop offenders feel free to offend again and again without repercussion. It is disturbing, however. It means communities lack essential knowledge about the armed strangers wielding power over them and are denied basic information needed to get offending cops off their streets.

Many forces in Canada do not report disciplinary outcomes. In Ontario, suspending police officers requires a judge to impose a custodial sentence.

At least 60 people are killed by police every year in Canada, a serious undercount given that there is no formal, systematic reporting of police killings. Yet we know the names of only a few of the cops responsible. And of those who are named, we know little of their histories and previous acts of violence or expressions of racism, misogyny, etc.

In 2017, the Alberta Serious Incident Response Team (ASIRT), the unit that investigates police harm to civilians, cleared the repeat killer cop and the other Calgary police officers who shot and killed David McQueen on January 24, 2016. McQueen was a 53-year-old person with quadriplegia using a wheelchair, and he was experiencing a mental crisis. One of the officers who shot at McQueen was a killer cop who had committed a fatal shooting only a year before. That officer shot 27-year-old Anthony Heffernan four times, with three shots to the head and neck, on March 16, 2015. Heffernan had also been in some distress but was alone and confined to his hotel room and posed no threat to anyone, police or public, when police broke into his room and shot and killed him there.

The ASIRT investigation into Heffernan’s killing actually found evidence that an offense had been committed by police but in the ASIRT release on the McQueen killing, Susan Hughson, executive director of ASIRT, suggested that the killer cop’s involvement in the Heffernan case has no bearing on his right to use his firearm in another case. According to Hughson, “You have to look at the incidents independently and look at the circumstances surrounding them to determine whether the steps taken or the actions taken were justified. And, just because the officer has been involved in another officer-involved shooting, he does not lose the protection of the law.”

This shows how little the oversight agencies regard the people and communities that police harm. We might instead ask why the officer was still on the force and being deployed in situations involving a person in distress.

Greg Ritchie, a 30-year-old Ojibwe man from Saugeen First Nation near Owen Sound, Ontario, was shot and killed by Ottawa police on January 31. Family members have spoken publicly to say he was experiencing mental health crises and was heading to a pharmacy to pick up medication when he was shot and killed by police. The responding officers have been identified as Ottawa constables Thanh Tran and Daniel Vincelette. Witnesses have reported hearing more than two shots. Tran is a repeat offender. He and another officer had been charged, in September 2011, with assault causing bodily harm following the arrest of an intoxicated 50-year-old homeless man.

Constable Daniel Montsion is one of the Ottawa Police Service officers who on July 24, 2016 killed Abdirahman Abdi, a Somali-Canadian man well-known and cared for in his neighbourhood. Numerous witnesses to the police killing of Abdi have reported that the officers involved overreacted with extreme violence against the man despite appeals from neighbours not to hurt Abdi, who—as the neighbours were aware—struggled with mental health issues. So it was extremely disturbing to find out that Constable Montsion was policing a neighbourhood of Somali migrants despite having previously, by his own admission, “panicked” during a violent takedown of another Somali-Canadian man in the city.

News of this previous incident of panic in the presence of a Somali-Canadian man was released as part of a court decision acquitting Abdullah Adoyta (25) on gun charges following an arrest by Montsion. Notably, the judge in that case raised concerns about the reliability of Constable Montsion’s sworn testimony regarding the 2014 police raid that resulted in the arrest of Adoyta. Ontario Superior Court Justice Marc Labrosse noted that Montsion’s story conflicted both with Adoyta’s account and with the testimony of a senior officer on key points.

A very few killer cops, such as James Forcillo and Monty Robinson, have become part of public consciousness, usually because their killings were recorded and the video circulated or because their acts were so inescapably egregious that oversight agencies could not so easily excuse them. And it only came out after Robert Dziekański was killed that Robinson had been moved around previously because of his disturbing conduct histories. It should not require these extremes for communities to know the names and behaviours of killer cops.

Police forces are institutions of the capitalist state. They are founded and maintained to secure and manage private property and conditions of exploitation and accumulation. They are key expressions of the state’s monopoly on violence. The only way to truly address policing is through abolition and development of working-class community care. And this means class struggle.

Arguing for a public registry of police offenders is not a substitute for abolition. It is a means to community knowledge and self defense, and a tool in community efforts towards abolition. At a very basic level, communities have a right to know about police actions in their communities and the identities of officers carrying out specifically egregious harmful acts (recognizing to be sure that all policing is violence). As a very minimal form of community care, communities have every right to expel those officers from their communities and to ensure that they are not passed off to other communities. Doing this becomes especially difficult if communities do not even know what particular officers have done, who they are, or their histories.