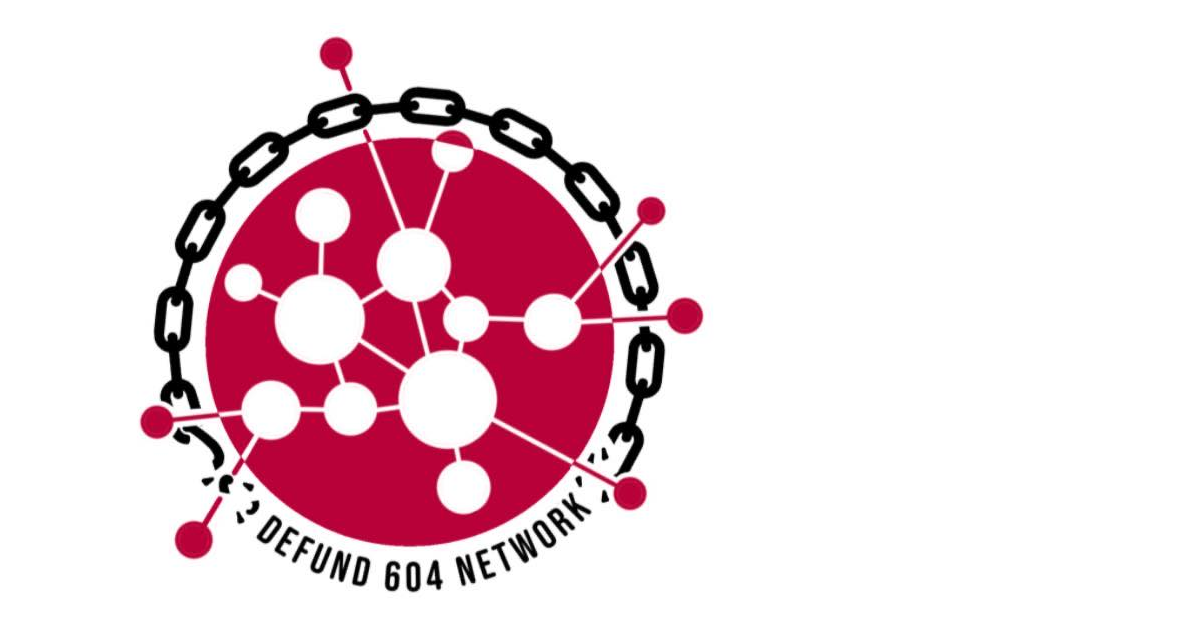 Tonye Aganaba and Chantelle Spicer live in the unceded territories of the Musqueam, Squamish, and Tsleil-Waututh people, in what is colonially known as Vancouver. They are active in the Defund 604 Network, a collective that organizes around police and prison abolition. Scott Neigh interviews them about that work.

As most listeners will no doubt recall, the murder of George Floyd by police in Minneapolis in May 2020 sparked an uprising against anti-Black racism and police violence that swept across North America and around the world. While not the first such uprising on this continent even in just the last decade, the momentum that it generated under the banner of “defund the police” changed mainstream conversations about policing in an unprecedented way. While that upsurge of highly visible mobilizations has long since ebbed, as is inevitable with that kind of spontaneous uprising, and some of the mainstream space that it opened has been recouped by defenders of the status quo, it would be a serious mistake to underestimate the currents of grassroots police and prison abolitionist work catalyzed and amplified by that uprising that are very much ongoing.

The Defund 604 Network got its start during last year’s uprising. A few well-known community organizers in Vancouver reached out through their networks to bring together people they knew to be committed to, as Spicer put it, “abolitionist work and transformative futures” to seize this new moment by working collectively in new ways.

Notwithstanding oft-heard claims that all of this is a US thing, the call to push back against anti-Black (and anti-Indigenous) racism and police violence resonated deeply in impacted communities in Canada precisely because of what such communities face every day. As one of the most expensive cities in the world in which to live, people in Vancouver experience ongoing mass criminalization and violent displacement by police – particularly people who are drug users, unhoused, poor, Indigenous, Black or otherwise racialized, or some combination.

The work of the Defund 604 Network has gone in a few directions. A key part of that has, of course, been ongoing organizing to defund the Vancouver Police Department. This year, that has looked like a substantial and sustained grassroots intervention into the city’s budget process – an intervention the network is calling the “People’s Budget.” From May until September, the network focused on engaging particularly with people and communities most impacted by police violence and most marginalized from the official city budget processes around their needs, demands, and already-existing visions for a safer and more just community. The demands include peer-led nonviolent mental health supports, accessible non-market housing, safer drug supply, return of land to Indigenous peoples, and participatory budgeting. More recently, they have begun putting pressure on city hall around those demands.

However, abolitionist politics are not only, and in fact are not even primarily, about making demands on the state.

Aganaba put it like this: “There’s a lot of people who think about abolition, and they’re like, ‘Oh, that’s so destructive, you just want to get rid of all the police and get rid of the military.’ And I’m like, yes, yes I do want to get rid of the police and I do want to get rid of the military. But that doesn’t mean that I want to leave a vacuum where they used to be. What it means is that the things that we’ve been using up to, up until this point – violence, harm, sexual violence, all of these different tools that have been used by the hegemonic ruling system that we’re living under – we want to remove those, but we want to make sure that we have the services, the programs, the institutions, the networks, the communities that will operate and act in the way that we want them to act. I think that there’s [a] quote by [US-based abolitionist] Ruth Wilson Gilmore where she says abolition means not just the closing of prisons, but the presence instead of vital systems of support that many communities lack.”

In other words, a central part of abolitionist organizing is building alternative institutions that reduce harms, meet needs, defend communities, and facilitate thriving. So even in the engagement around the city budget, the primary focus is not just on reducing how much money goes to the cops but on how best to support the things that marginalized communities are already doing to keep themselves safe, and have already imagined as part of their better futures. As examples, today’s guests talked about the way that the Vancouver Area Network of Drug Users (VANDU) mounts counter-patrols when the police and city workers are sweeping homeless people off the streets. They also talked about the long-term vision held by many sex workers of a peer-led, indoor, safer space for them to work, which is also one of the network’s core demands in the People’s Budget. Notably, none of this means just shunting money into mainstream social services, which themselves often cause harm to marginalized communities.

Along with the work around the city budget, the group is engaged in organizing and supporting a number of other campaigns. This includes supporting the movement for a safer drug supply, a range of mutual aid initiatives, efforts to get police out of wellness checks, solidarity with Wet’suwet’en land defenders, and the campaign to get justice for Jared Lowndes, a Wet’suwet’en man murdered by the RCMP in July. At the moment, they are also part of a coalition calling for decarceration in the midst of BC’s flooding emergency.

While it can be frustrating to have to deal with hostile governments – governments that really don’t care about the harms that police do, or about what communities really need to be safe and healthy – today’s guests argue that the key is to remember that building abolitionist futures happens not primarily through convincing politicians but through care work, creation, experimentation, mobilization, and organizing with each other in our communities.

Image: Used with permission of the Defund 604 Network.