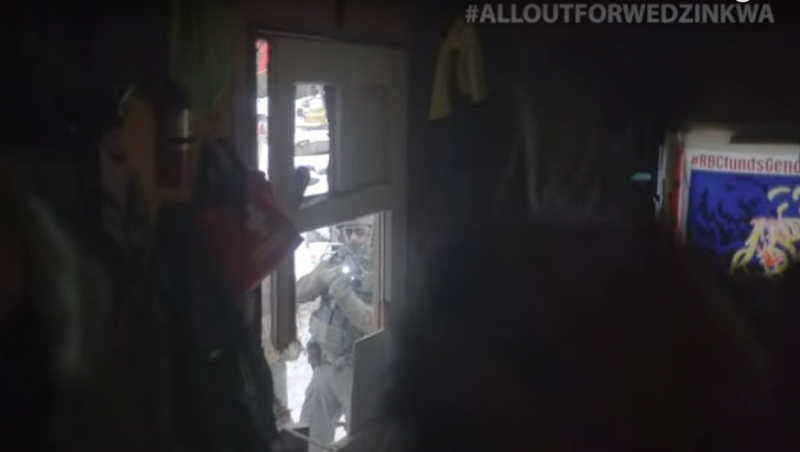 We are re-publishing video here of the arrest of land defenders and journalists in Wet'suwet'en Yinta (territory) on November 19, 2021, by Royal Canadian Mounted Police (RCMP). Video is from Gidimt'en Access Point's YouTube, recorded by Michael Toledano, who was arrested. The description posted with the video follows here.

The raid involved about 50 police, including 20 tactical officers in green military fatigues, with assault weapons and attack dogs who surrounded the camp. During the raid, the RCMP breached two structures - Skïy ze’ Cabin, a cabin built on the proposed drill pad site, and a nearby tiny home. RCMP cut the camp’s satellite internet and radio antenna cords.

The police attempted to enter the tiny house, but Cas Yikh supporting chief Sleydo' demanded to see a warrant. Police then broke down the door with an axe and a chainsaw belonging to the land defenders, and arrested everyone inside, including Sleydo’. Police also entered Skïy ze’ cabin with a chainsaw and arrested everyone there, including Dinï ze’ Woos’ daughter, Jocey.

For 56 days, Gidimt’en land defenders (under the direction of Dinï ze’ Woos) re-occupied their ancestral Cas Yikh territory, blocking the Coastal Gaslink pipeline from drilling beneath Wet’suwet’en headwaters. The land reclamation known as Coyote Camp was established to protect the sacred Wedzin Kwa. Over the course of November 18th-19th, 32 people were arrested, including 3 journalists and 3 Legal Observers. All land defenders have now been released from prison, with a February 14th, 2022 court date.

- Host a solidarity rally or action in your area.

- Issue a solidarity statement from your organization or group. Email to: yintahaccess@gmail.com