Axial Tilt Is The Reason For The Season

Axial Tilt Is The Reason For The Season

Social cohesion is survival
by
Anonymous Author
This post has not been approved by Media Co-op editors! 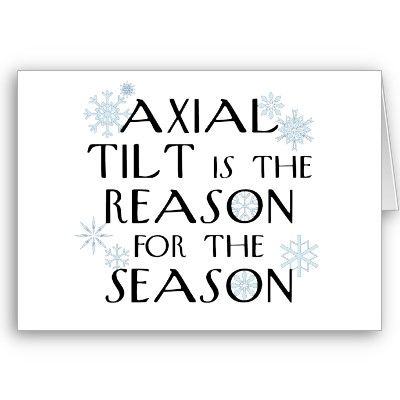 This time of year again, where different groups try to pretend that certain seasons or traditions belong to some specific culture or context. None of it is true, even if 'factual', the narratives are false at their core.

Holidays like 'Thanksgiving' and 'Christmas' did not originate from any specific religion or culture. They are products of the seasons, they are survival mechanisms, and they are part of how humans survived for thousands of years in parts of the world where survival is very difficult.

These holidays originated in every culture that developed in the parts of the world that have what is called 'winter'.

'Winter' exists in the parts of the world nearer to the polls, away from the equator where the sun shines brightest all year, because of the planet's axial tilt at different times of the year. Near the poles for part of every year, there is always sunlight all day, and then at the opposite time of year, there is no sun at all.

There are people around the world who don't know what winter is in real terms, so I'll explain it. A household freezer goes to -15 degrees celsius, I live in a part of the world where for several months every year the average tempurature is below that.

The leaves fall off the trees and most of the plants seem to die, but leave seeds for the next year. There's no food growing during that time.

I mean every day for months it is so cold outside that the water freezes solid. In remote parts of Saskatchewan, people routinely drive across lakes and rivers in trucks and refer to them as 'the winter roads'.

Most animals here have evolved to 'hibernate', that is, to burrow under the ground for that entire part of the year, some like squirrels stocking up nuts, some like bears eating massive amounts of food and then literally sleeping for months.

Without an insulated shelter with artificial heat sources, fire of some kind, humans will die.

Then there's the snow. It's like a liquid and a solid at the same time, and when it's up to your waist it's heavy to walk through.

I met a man several years ago who was sobbing and shaking sitting in the snow next to his car, which was stuck in a snow bank. He had dug himself in deeper spinning the 'all season' tires, he had exhausted himself pushing and digging. He had come from India that summer, and this was his first winter. He had been told about snow, but not like this. Nobody had told him that this white fluffy stuff had all of these conflicting charactaristics, like solid and liquid at the same time, the worst aspects of both. I helped him get out, and was trying not to laugh, but that's hard to do.

In history, many armies have been defeated by snow. The Romans thought they understood snow, they had mild winters and there was snow in the mountains, but when they invaded Germany they discovered snow as a force. But German winters were mild compared to further north. Napolean and Hitler both learned the meaning of winter when invading Russia.

So, how did human societies survive, thrive, build civilizations under these conditions?

Together. As families, as communities, survival meant working in the spring, summer and fall not only for day to day needs but to prepare for the months when nothing would grow. Communities of whatever form or size with many different religions and social orders in every region and of the north, certain traditions closely resemble each other.

Things like 'rebirth' festivals in the spring when the snow is melting and the leaves come back to the trees, and harvest festivals in the fall, when communities celebrate the gathering of the kinds of crops they work to grow all summer. Many different 'origin stories' of these festivals, many different iconographies associated with them, but the structure is the same, the community celebrates it's own hard work with optimism that they are ready to face the winter. But also to make sure that everyone was, in fact, ready to face the winter. The get-together is where people talk who usually don't talk, when you can check in on everyone to make sure that everyone has what they need.

Then, in the middle of winter, at the coldest and darkest time of year, when things should be their hardest, we defy the ice and wind with another celebration, to show ourselves as a community that we are doing it, that we not only accomplished the task of survival but have excess to spare. Gift giving, openly or anonymously, was a way to balance out differences that occurred because of different circumstances.

The mid-winter festivities were also a time for people to check on each other, to make sure everyone was making it through, and someone with excess food, firewood, etc., could give some to someone who was short.

Without developing these kinds of traditions, humans probably would not have been able to survive under these conditions for long enough to develop into advanced civilizations.