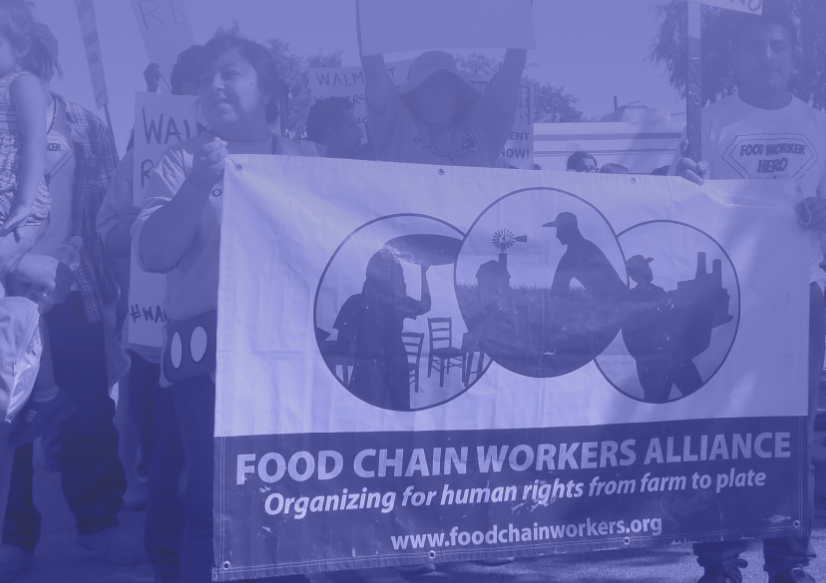 “Worker-led organizing is the way forward to a food system that is not exploitative, and nourishes all people,” says Elizabeth Walle, development coordinator at the Food Chain Workers Alliance.

The Food Chain Workers Alliance is a coalition of unions and labour organizations across Canada and the United States, with members working in different sectors along the food chain, including harvesting, processing, restaurant and retail.

The Alliance’s mission is “to build a more sustainable food system that respects workers’ rights, based on the principles of social, environmental and racial justice, in which everyone has access to healthy and affordable food,” according to their website.

To achieve this mission, they are engaging workers across industries and across borders, through advocacy, education, and by organizing actions.

We recently published a story covering one such action at multiple Starbucks locations across North America, in solidarity with migrant farmworkers who were facing reprisals for holding a wildcat strike at Martins’ Family Fruit Farm in Vienna, Ontario, which supplies products to Starbucks.

At the heart of the Alliance's work is a powerful vision of solidarity, commensurate with the scope of the global food economy. For example, it’s estimated that 50 – 60,000 migrant workers come to Canada every year to work in the agricultural industry. At the same time, 70% of greenhouse vegetables produced in Canada are exported.

“It's our ongoing work to really think meaningfully beyond just our members, how are we in solidarity with food worker fights [not just] around the continent, but around the world?” reflects Singh.

How did the alliance come together?

According to Walle, the initial conversation was about “how frontline workers could create greater solidarity across sectors and across geographies, to build a stronger movement for food workers.”

“In the US, at least, all food workers together form a very large portion of the workforce,” she says. A 2016 study from the FCWA found food workers represent one in seven American workers, or fourteen per cent. “In that same study, we found that that group is also the lowest paid workforce collectively.”

Despite this, only a tiny fraction of those food chain workers in the US workers, six per cent, are members of a union.

“So one of our goals of the FCWA is to be building that,” says Alliance Co-Director Sonia Singh. “We want more food chain workers to be able to have power on the job, [and] to determine their conditions. COVID has shown us that is not just about wages, or sick leave, it's actually about being able to protect your life, and unionized workers are much more able to stand up for the kinds of protections that were needed.”

The Alliance supports members’ actions and advocacy, and creates a space for members to come together to communicate, collaborate, and build power and solidarity, across industries and across borders.

Workers keep the supply chain going, says Singh. “If warehouse workers were in solidarity with farm workers, who are in solidarity retail workers, that potential to actually shut things down, we would have that power.”

“When grocery [stores] can't get products on their shelves, because other unionized workers are in solidarity with striking grocery workers, that adds their leverage and power,” says Singh. “That's our dream, that we're moving to a place where workers can back each other up in their fights, because they have that organizing power.”

In December 2019, members of the Fédération du commerce (CSN) were on strike for about three months at an Olymel meatpacking facility in Princeville, Quebec. As a solidarity action, the FCWA organized a phone campaign to the Olymel head office.

“The workers saw the international solidarity we [brought] in the conflict, so [they] don’t feel alone in their conflict,” said CSN President Alexandre Laviolette, via Zoom. “So that gave more hope, more strength to continue their fight.”

While the phone campaign wasn’t “a game changer” in negotiations, Laviolette says, it did add supplementary pressure on the employer.

Training, leadership, and organizing in the pandemic

Along with solidarity actions, the Alliance’s work includes advocacy at the regional and federal levels, a purposeful effort to bring workers into those high-level advocacy spaces, as well connecting members with each other, to exchange information and strategies, and leadership training.

With most meetings moving online due to COVID-19 restrictions, this has actually enabled more participation and engagement in some cases.

“Sometimes we'll have member meetings or other meetings where people are at work, actually, like in the fields harvesting, working, whatever,” says Walle, meaning workers will not be able to attend those in-person meetings. “But [now] they're connected by Zoom, and they can participate. Which makes a huge difference.”

The CSN was a participant in the Restaurant Worker Leadership Project, which brought together ten restaurant worker leaders from New York, Montreal, Portland, and the Bay Area to discuss and exchange strategies, barriers, concerns, and successes.

“That basic one-on-one organizing training is something that we've seen more and more is a really important role for an Alliance like the Food Chain Workers, to provide to members a space where people can reflect on their day-to-day experience and organizing that they do every day,” says Singh.

Laviolette explains that promoting solidarity and action within their membership, beyond and between contract negotiations and administrative processes, is a key priority for the CSN, and that the Restaurant Leadership Project is aiding in that goal.

“We are good organizers,” he says, but the CSN want “to teach [our members] how to be good activists, and bring solidarity in the workplace. We're good when it's time to negotiate our collective agreement. But when it's over, it's too quiet in the workplace.”

He says they want to use the diverse tools solidarity offers to resolve collective problems. “And if your contract is not good enough, during its life, then, how can you use solidarity to level up? Even if you're outside of the natural time to negotiate [a contract]?”

The CSN also attended the 10th Annual FCWA Summit in Albuquerque, New Mexico in May of 2019.

Laviolette says that the CSN are translating into French and incorporating materials from the Restaurant Worker Leadership Project, and the Summit, and using those to “rebuild” how they do trade unionism. And in the interim, the Alliance is there to support strikes, campaigns and actions. “The FCWA always offers us help in each fight.”

Looking even more broadly, Laviolette reflects that, “We are in a global economy. We have to have global links with unions, with activists. Everybody is fighting the same people. The more we know, that we link, the more we can help everyone, [and] the stronger we can be.”