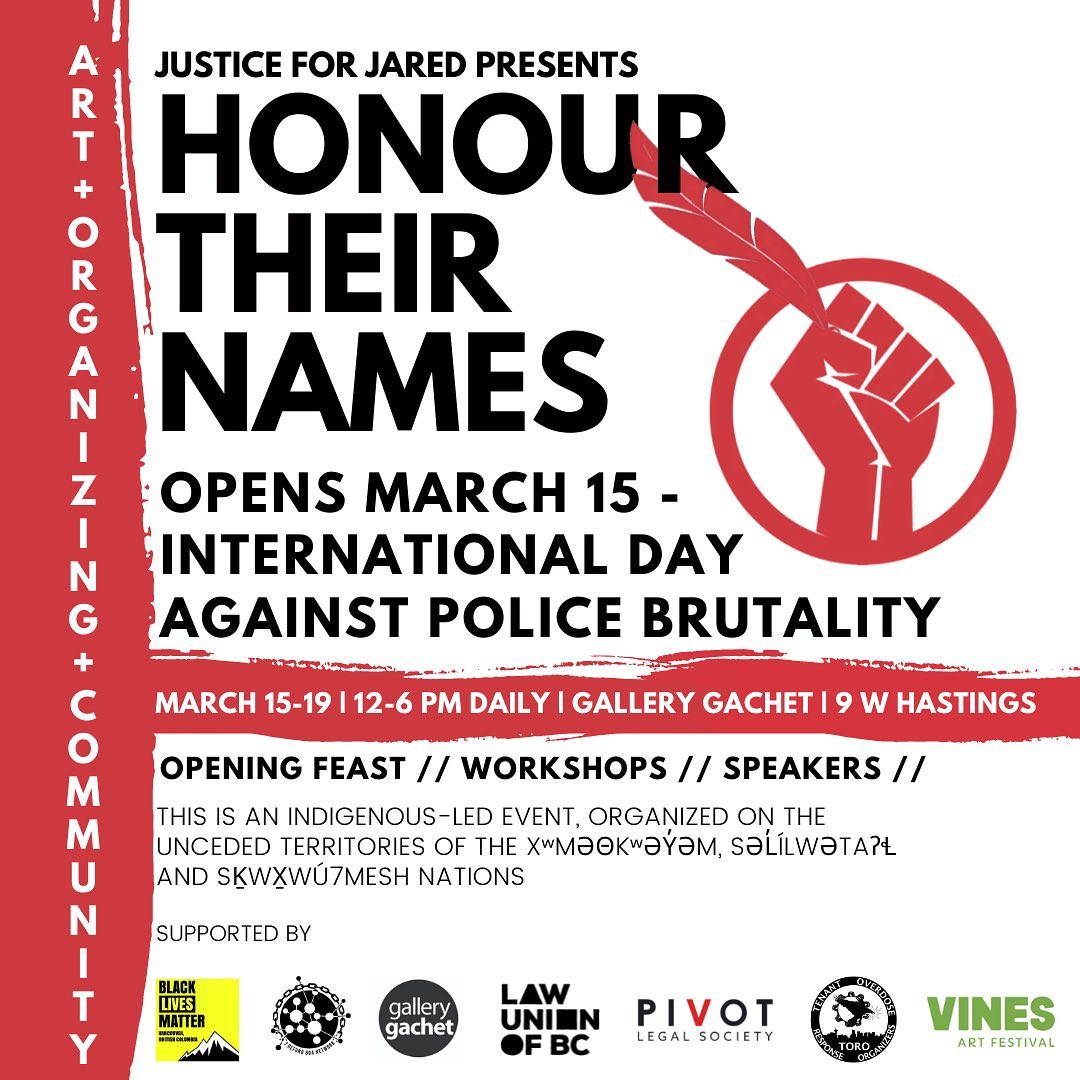 March 15 is the International Day Against Police Brutality, a day of action and solidarity against the violence of policing. It has its origins in 1997 through the work of the Montreal-based Collective Opposed to Police Brutality (COPB) and the Black Flag group in Switzerland. In 2022, events are being organized in several cities across, and against, the occupying Canadian state.

Policing at all levels in so-called Canada is a force of ongoing colonialism and social war. Its function is the defense of capital, securing and maintaining conditions of private property, exploitation, and accumulation, through dispossession and displacement of Indigenous peoples and repression and social control of land and labour.

In 2021, there were at least 104 police-involved deaths in Canada. So far this year, at least 19 people have had their lives taken through police actions.

In so-called Vancouver (unceded territories of the xʷməθkʷəy̓əm (Musqueam), səlilwətaɬ (Tsleil-Waututh) and Sḵwx̱wú7mesh (Squamish) Nations) the Justice for Jared campaign is holding “Honour Their Names,” an art-show and organizing space, from March 15 to 19. It consists of an art show and other programming at Gallery Gachet highlighting works that remember and honour Indigenous people shot and killed by police.

Jared Lowndes, a Wet’suwet’en man, was shot and killed by the RCMP in the parking lot of a Tim Horton’s in Campbell River, BC, the town in which he had lived for the last six years, on June 8, 2021. During the RCMP attack, he was also assaulted by a police dog.

Canadian media produced numerous stories about the police dog that was killed during the action. Memorials to the dog were put up in the town and there have been various tributes to the dog. At the same time, there have been few stories on the actual victim, Jared Lowndes, and the town has created no memorials, leaving that as an additional burden for grieving loved ones.

In Ottawa (unceded Algonquin Anishinabe Territory), community members are holding a rally against police violence outside Ottawa Police Services (474 Elgin St.) at 5:30 PM. The families of Anthony Aust and Regis Korchinski-Paquet, two young people killed by police, are involved and their grieving mothers Nhora Aust and Claudette Beals will be speaking.

Rally organizers are upholding the call: “ENOUGH IS ENOUGH! Policing is a violent colonial practice that kills our community members and terrorizes our people.”

They are also centering an abolitionist perspective which organizes for a world without police: “We can fight for, imagine, and create decolonial and liberated futures where EVERYONE is safer.”

Ottawa, of course, recently endured weeks of occupation by white supremacist and far-right forces under the “Freedom Convoy,” during which cops openly supported the occupiers, with some providing them supplies or helping them set up structures. The Ottawa rally stresses that the convoy occupation and police response only reinforced the colonial character of policing and its always present part in sustaining white supremacist colonial endeavours.

“As we gather with those affected by the inherently violent policing in tragic and irreversible ways, we must remember that policing is a colonial practice enacted by the Canadian colonial state to (re)produce and enforce its ongoing colonial project aimed to control, exploit, dispossess, forcibly confine, and commit genocide and apartheid against Indigenous peoples and their lands.”

And while many in Canada were outraged by Ottawa police actions, none of this was surprising to Indigenous and racialized people who have regularly borne the brunt of that force’s violence.

In addition to their work International Day Against Police Brutality work, COBP also support victims of police violence, documenting cop violence, and organize a copwatch along with doing workshops and publishing “know your rights” information. They formed in 1995 from a defense committee supporting people arrested for opposing a far-right group, Human Life International, and continued to fight the ongoing violence of the Montreal police.

Previous anti-police actions in Montreal (Tiohtià:ke, unceded lands of the Kanien'kehá:ka (Mohawk) Nation) have been vigorous and vital affairs and they have not been shy in defending people against police violence. Cops have been provocative in targeting the marches and have used the occasion to make numerous arrests.

This year folks are meeting at 5:30 PM on March 15 at the Lionel-Groulx Metro Station. On March 12 they are holding an anti-police show with Ultrarazzia, Failure, Destructive, and Total Waste.

Their call perhaps puts it all as directly as needed: “Faced with police violence against Indigenous peoples, whether here or elsewhere, we all come to the same conclusion: Fuck the colonial police!” 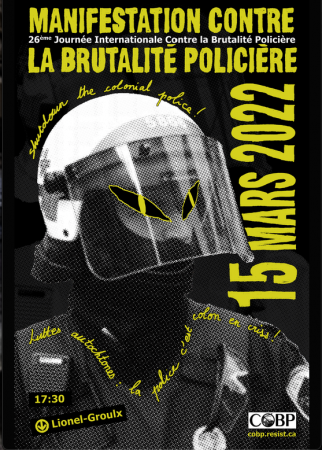