Dispatches from the movement for police abolition in Canada

Dispatches from the movement for police abolition in Canada 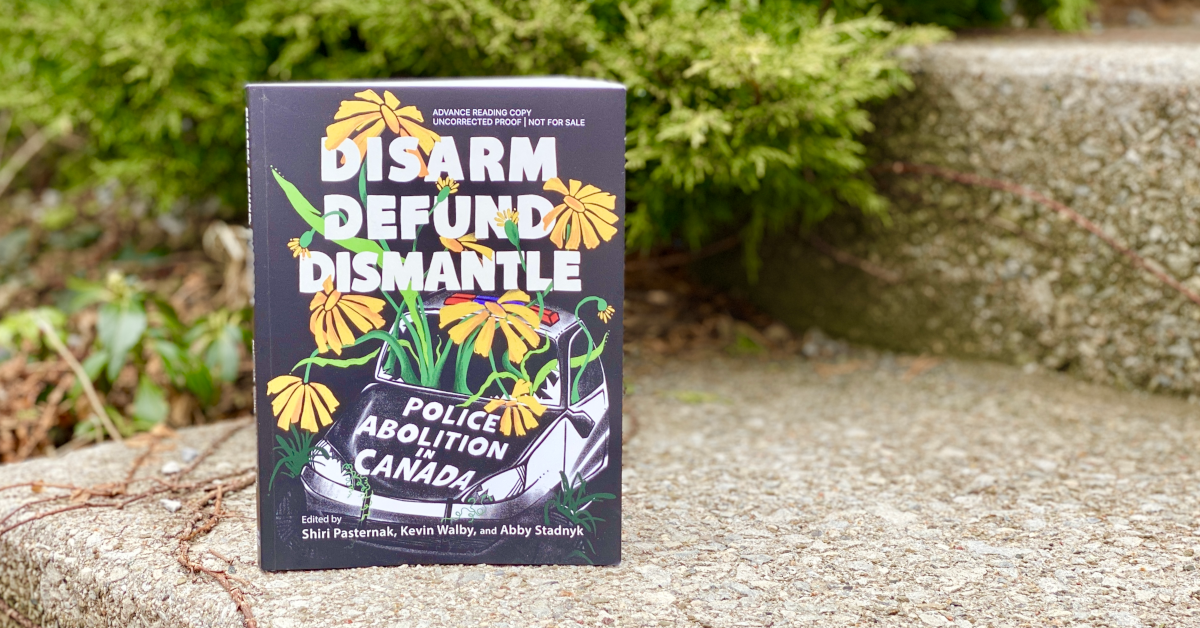 Ellie Ade Kur and Abby Stadnyk are grassroots organizers with abolitionist politics. They are also both involved in Disarm, Defund, Dismantle: Police Abolition in Canada (Between the Lines, 2022), a new book collection bringing together pieces by organizers and scholars writing in the context of the constellation of efforts to defund and abolish the police in Canada over the last two years. Scott Neigh interviews them about their own organizing work, about the larger movement, and about the new book.

In 2020, North America saw the beginning of a massive uprising against anti-Black racism and police violence. Sparked most directly by the police murder of George Floyd in Minneapolis, but also a product of the highly inequitable hardships of the then-new COVID-19 pandemic, the uprising soon became most clearly associated with the slogan “Defund the police!” It was one of those moments where a movement catalyzed a rapid and previously unthinkable transition in mainstream opinion. And within other social movement contexts, politics critical of the cops were taken up and centred more broadly than ever before. This moment was only possible because it built on longstanding traditions of police and prison abolitionist organizing – grassroots political work of survival, thriving, and resistance in the face of state violence that has not always used the language of abolition, but that has played out over decades, even centuries, and has most often been grounded in communities of people who are most harshly targeted by the harms of policing and prisons.

In Canada, the abolitionist work over the last two years has taken many different forms. Not only have there been campaigns (mostly so far unsuccessful) to reduce the budgets of police forces, but also massive mutual aid projects, resistance within prisons as always-terrible conditions got worse in the context of COVID, campaigns for decarceration as a COVID safety measure, extensive public education, and efforts to uncover the histories of abolitionist struggles and think through abolition in the context of specific geographies, communities, professions, and movements.

At the invitation of Kevin Walby, a criminology scholar and abolitionist organizer, a number of people active in this work across Canada came together to produce the book that became Disarm, Defund, Dismantle. It was intended as a way to record and to celebrate the heightened resistance in this moment, a way to share lessons, and a way to provide a space to deepen the radical thinking that has been so much a part of this movement. (There will be a virtual launch event for the book at 7pm Eastern Time on April 14, 2022.)

Abby Stadnyk is a white settler writer and organizer living in amiskwacîwâskahikan, also known as Edmonton, Alberta. Her understanding of policing and prisons was radicalized through learning from the sharp anti-colonial analyses of the mostly Indigenous men that she got to know initially as a volunteer writing teacher in prisons. She is currently a member of Free Lands, Free Peoples, an Indigenous-led, anti-colonial abolitionist group based in Edmonton.

Ellie Ade Kur works with Maggie’s Toronto Sex Worker Action Project, one of Canada’s oldest sex worker justice organizations. She identifies her abolitionist politics as coming from her own experiences and from the ceaseless need to organize in support of friends, family, and co-workers targeted by the state. In the case of sex worker justice organizing, she argues, too often that happens in the absence of any meaningful support from other social movements.

Stadnyk is one of the editors of the collection, along with Shiri Pasternak and Kevin Walby, and she co-wrote the chapter “A Brief Introduction to Anti-colonial Abolition” with other members of Free Lands, Free Peoples. It is an effort to advance an understanding of abolition that is explicitly anti-colonial and grounded in the prairie context.

Ade Kur co-wrote a chapter with Jenny Duffy on behalf of Maggie’s called “Sex Worker Justice – By Us, For Us: Toronto Sex Workers Resisting Carceral Violence.” It looks at the violent and oppressive policing of sex work in general in Toronto, and resistance by sex workers. In particular, it talks about the powerful collective efforts by queer and trans, Black, Indigenous, and racialized sex workers in Toronto’s Downtown East and their allies in response to the police refusal to investigate the disappearance of Black and Indigenous trans woman Alloura Wells in 2017. (Read an excerpt of this chapter in Briarpatch.)

The collection includes a chapter examining how Indigenous communities have responded in grassroots ways to situations of missing and murdered women, girls, and Two-Spirit people. It includes two chapters examining the ways in which social work is part of the carceral system. Another looks at the struggle against participation by police in the labour movement. Other chapters examine the connection between policing and white supremacy and settler colonialism, histories of abolitionist organizing in specific places, policing and the overdose crisis, and other aspects of abolitionist work by sex workers.

According to Stadnyk, the book includes both explorations of “how people, particularly within communities that have never been served by police and prisons, and who have been violently harmed by those institutions, are actually taking care of themselves and each other anyway, already” and “creating those alternative worlds outside of the system,” and other pieces that take apart how “mythologies about police function to naturalize police in our society.”

From the vantage point of 2022, the breathtaking momentum of the initial uprising has long since receded, but gains have definitely been made. Looking back over the last two years, abolitionist organizing in the Canadian context has resulted in more people engaged in more grassroots projects (of all of the kinds already mentioned and more), a greater reach for both broad sentiment critical of the police as well as deeper abolitionist ideas, and greater interconnection across local abolitionist work in different cities. Still, much work remains to be done. Stadnyk warns of possibilities of backlash and crackdown. And Ade Kur points out the need for ongoing political work within abolitionist organizing spaces, particularly because so many continue to exclude or marginalize sex workers.

She said, “There’s something that’s really important about political development … that comes from a place of understanding the violence of the state, the violence of police, and the violence of the criminal justice system through a place of direct experience with it and having to organize to support friends, family, co-workers, in the absence of support from literally anyone else. From, you know, state actors, from social workers, from health care providers, but also … a lack of support and erasure from other activists as well.” She continued, “I see a lot of hope and I see a lot of strength in sex worker communities to resist state violence and to resist some of the stigma and the erasure that comes from public spaces, from social movement spaces. But I also really see a need for our movements across the board, for Black liberation movements, for organizing around queer and trans rights, anti-poverty organizing, and harm reduction advocates – I see a need for there to be a much stronger analysis and interrogation of the anti-sex worker sentiments that thrive in social movement spaces.”