Ottawa residents against the convoy, and for solidarity and social justice

Ottawa residents against the convoy, and for solidarity and social justice

Ottawa residents against the convoy, and for solidarity and social justice by Scott Neigh -- Talking Radical Radio 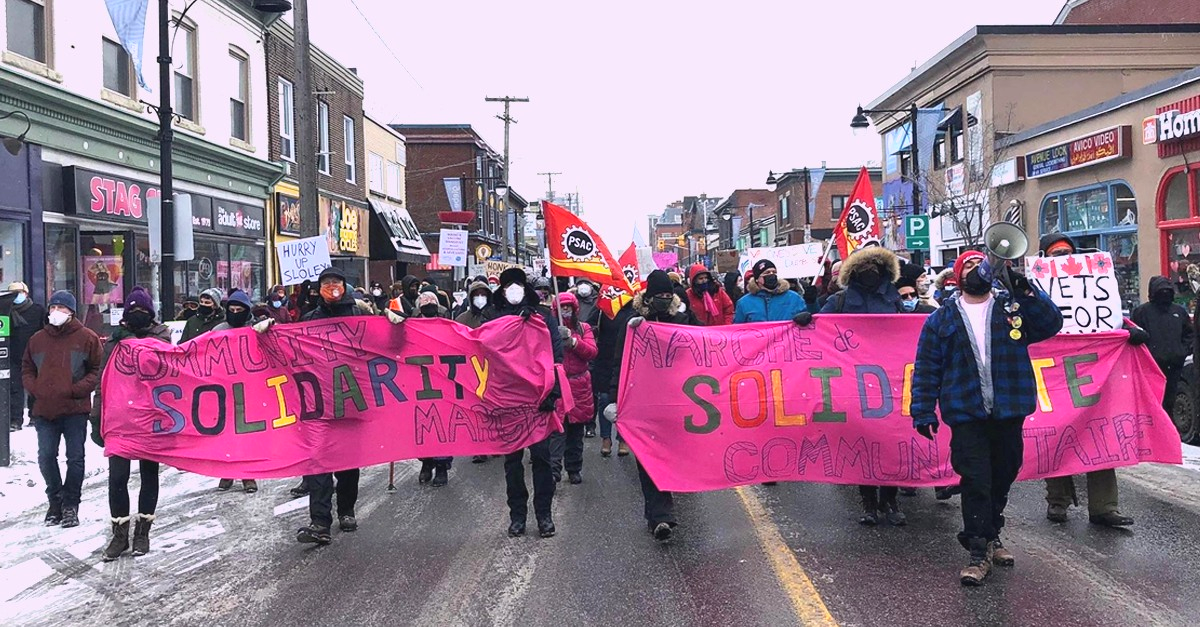 Alex Silas and Angella MacEwen live in Ottawa and are active in their unions and their communities. This includes as members of Community Solidarity Ottawa (CSO), a coalition of unions, community organizations, and residents that came together during the recent convoy occupation of downtown Ottawa to give voice to grassroots opposition to the convoy, its far-right organizers, and its harmful tactics, while also opposing governments that have not done enough to support working-class communities and frontline workers during the pandemic. Scott Neigh interviews them about the convoy, about grassroots responses to it, and about Community Solidarity Ottawa.

Silas has been active in community groups working for things like a higher minimum wage and tenant rights, and also in his union, the Public Service Alliance of Canada (PSAC), where he is currently the regional vice-president for the National Capital Region. Angella MacEwen has been involved in the peace and climate movements, and she is an economist with the Canadian Union of Public Employees (CUPE).

As residents of Ottawa, when the convoy protest rolled into town at the end of January, they, their friends, and their co-workers were among the people who had to face the convoy’s harmful impacts – MacEwen, in particular, lives in the downtown area that was occupied.

The ostensible basis for the convoy occupation in Ottawa, and related actions across the country, was opposition to vaccine mandates and other public health measures. And, certainly, while vaccine acceptance in Canada is very high and almost 90% of eligible people in this country have had at least one shot of vaccine, the organizers still managed to tap into some real dissatisfaction with government handling of the pandemic. Though today’s interview participants are harshly critical of the convoy, they have their own criticisms of government action, pointing towards vastly inadequate government supports for people detrimentally impacted by the pandemic, as well as lack of sensitivity and equity in the implementation of public health measures. MacEwen said, “I do think that we have, collectively, a responsibility for creating the situation where people felt like the convoy was speaking for them.”

However, even a cursory look makes it clear that the convoy protest was a very different thing than its organizers’ PR claimed. It was not, for instance, a protest of working-class truckers. Most participants were not truckers, those who were truckers were largely not working-class but owner-operators – in the words of Silas, whose uncle is a trucker in Atlantic Canada, “they were bosses, essentially” – and their demands had little to do with the very genuine issues that truckers in this country face. More importantly, most of the convoy’s core organizers were well-known far-right and white nationalist figures, and they used a quite broad and non-specific appeal to people’s dissatisfaction to draw people into their orbit, and to grow the networks and build the momentum connected with their very reactionary and very harmful form of politics.

The impacts of the convoy on Ottawa residents were profound. The incessant noise, the presence of far-right and racist symbols among convoy participants, and the active harassment of racialized people, queer and trans people, and women meant, according to MacEwen, “We really felt like we were just being held hostage in our houses.” Silas echoed, “People felt unsafe in their own neighborhoods. People were harassed. People were scared.”

In this context, the official response offered little help, and arguably did more to support the convoy than residents. MacEwen said, “We just had this growing sense of … having been abandoned by any of the institutions that are supposed to protect us, both in terms of public health and public safety.” For a period of time, for instance, one contribution from the mayor’s office was to advise people to stay safe by not going downtown, a profoundly unhelpful response for residents of the downtown and people working frontline jobs there. “It’s like, dude, people live here,” said Silas.

The role of the police was particularly concerning. As is true in most cities, the Ottawa police have a long history of violence and racism. The most prominent case in recent years involved an officer who used steel-reinforced gloves to beat a Black man suffering from mental illness to death – an act for which he was later acquitted. According to MacEwen, there are “groups who are doing really good work around accountability, around shifting the focus of funding from policing to preventative issues,” but also intense resistance to any of that from the police themselves and from their many supporters within the city’s leadership.

During the convoy occupation, there was widespread outrage among residents directed particularly at the police, who for weeks seemed to be doing practically nothing and at times seemed to be actively facilitating the occupation. MacEwen said, “We didn’t know, was there a mutiny happening within the city police? Because the leadership at city council were telling us that they were doing one thing, and journalists on the ground were showing us that that was not happening. For example, they were saying that they weren’t allowing refueling to happen, of the trucks. But then there were police officers there allowing jerry cans to go in. So it was clear that there was a disconnect between what leadership was saying and what was happening on the ground. But we didn’t know why. We didn’t know how serious that disconnect was.” She continued, “Racialized people, who had been organizing and trying to raise that there’s these issues that exist within Ottawa city police, were kind of like, ‘Yeah, we told you, this is this is what we’ve been saying. Can you see what we’re saying now, that the police aren’t there to protect us? … They agree with the convoy, they’re on their side, they’re sympathetic. They’re not here to protect us.'”

The city’s grassroots left was caught off guard by the convoy. As other activists have noted elsewhere, this is not the first time a similar tactic has been employed by Canada’s far right. In the past, it fizzled without amounting to much, and they expected the same this time. As well, while there is plenty of great grassroots stuff happening in Ottawa, the kind of organized presence necessary to adequately confront the convoy or prevent the occupation just did not exist.

During the convoy’s first couple of weeks, local activist networks were largely engaged in mutual aid and the kind of support work that doesn’t make the news. But people were definitely talking, including MacEwen, Silas, and many others – phone calls, informal Zoom meet-ups, emails, social media posts. All of that gradually cohered into a couple of larger and more formal meetings. There were some initial plans for a protest at city hall that was postponed over concerns about capacity to ensure people’s safety, in light of misgivings about the behaviour of both convoy participants and the police, but then a community march was organized on February 12.

In many ways, that march was only a first step, but it was an important one in that, after two long weeks of occupation by the convoy, it gave public, grassroots voice to a vision of care, health, thriving, and the common good, in contrast to the underlying agenda of the convoy’s organizers. The next day was the now much-mythologized Battle of Billings Bridge, in which residents – including many people who had participated in the march the day before – successfully blockaded convoy efforts to bring new vehicles and new supplies to the occupation of the downtown.

As the convoy subsided and since, there has been an upsurge in interest in grassroots political work in Ottawa. That has taken many forms, but one was the decision by the organizers of that initial march to form Community Solidarity Ottawa as an ongoing project, to dig into the long-term work of strengthening communities and insisting on better responses at all levels to threats to community health, wellbeing, and thriving, whether those threats take the form of the pandemic, cuts to public services, or organized action by the far right.