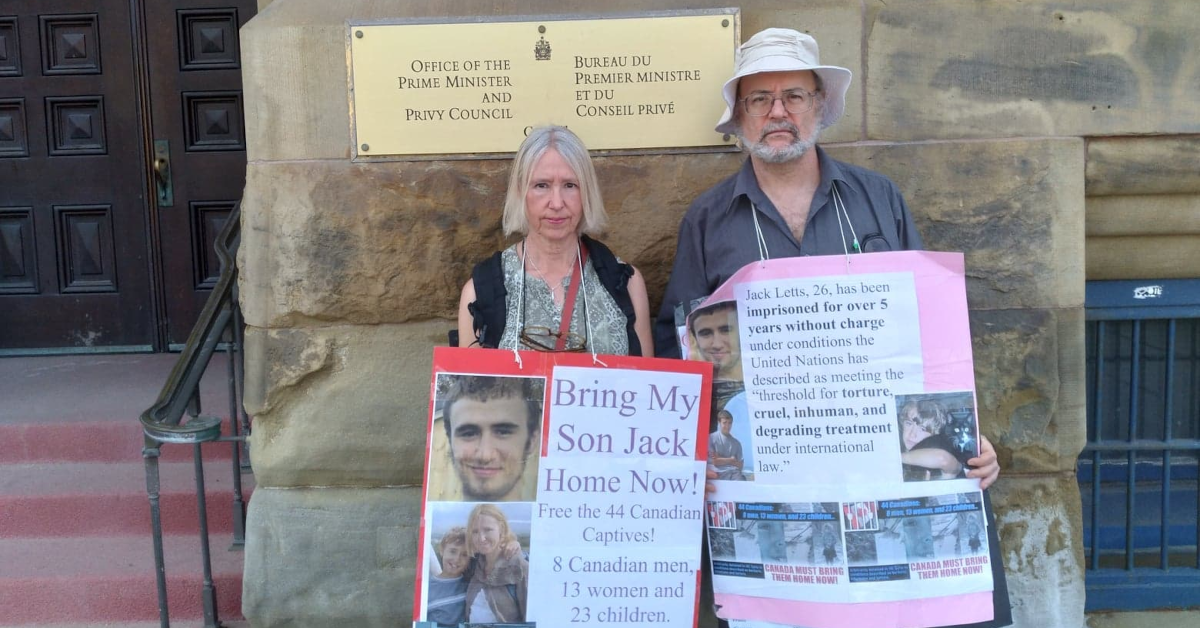 Sally Lane is the mother of Jack Letts, a Canadian citizen who has been detained for more than five years in northeastern Syria in conditions akin to torture. Matthew Behrens is a long-time activist and a member of Stop Canadian Involvement in Torture. Scott Neigh interviews them about Jack’s case and about the campaign to push the Canadian government to finally take action to bring Jack back to Canada.

The mistreatment of Muslims by the Canadian state since September 11, 2001 has taken numerous forms, domestically and internationally, including RCMP and CSIS harassment of Muslim communities and organizations domestically, and participation in military violence harming Muslim civilians in multiple countries around the world. Among other things, the Canadian national security state has profiled, targeted, and harassed Muslims. There was the use of national security certificates, whereby a number of Muslim men were detained indefinitely in the absence of any charges, publically presented evidence, or meaningful due process – the so-called “secret trials” cases. Then there have been instances of rendition to torture, in which the Canadian state engaged in various forms of complicity with the torture of Muslims (including Canadians) by other governments, whether through facilitating their rendition, providing or acquiring intelligence, and/or refusing to repatriate them. In all of these cases, the Canadian state has actively eroded or outright violated guarantees of due process and human rights – and has often gone on to lie about it.

The case of Jack Letts, originally a resident of the UK and dual citizen of the UK and Canada, is best understood in this context. According to Lane, Jack was always a “very intense kid” who threw himself into whatever he did. In his teens, his best friends at school were the Muslim kids in his class. He took a high school course in philosophy and ethics that opened his eyes to injustice in the world, got into lots of conversations and debates, and at the age of 16 converted to Islam and started to teach himself Arabic.

A few years later, with his parents’ support, Jack was on a trip to visit a friend in Jordan and to take a course in Kuwait. And then his parents got a call from him saying that he was in war-torn Syria. Lane said, “That was the point that our nightmare began.”

Events since then have been difficult and convoluted, to say the least. For a period of time, Jack was in territory controlled by the Islamic State (or ISIS). This was of great concern to his parents, of course, but it also put him on the radar of state authorities in the UK, who closely monitored his location and communications. At some point, a right-wing tabloid in the UK got hold of Jack’s story and turned distortions, half-truths, and lies into an Islamophobic media firestorm demonizing Jack, which has had repercussions down to the present day.

In his communications from Syria with his parents, Jack has been very clear throughout that he was never a member of ISIS and had not engaged in harmful activities. Lane said, “Jack has always said that he was never a member of ISIS, that he detested ISIS – that, yes, he was in IS territory, but he challenged them in the street. He actually went to court in Mosul, testifying against them, at which point he got thrown in prison. He was actually imprisoned by them twice. And they said the third time they caught him, they would kill him.”

Despite their intense surveillance, at no point have UK or Canadian state officials presented any evidence to Lane, to the media, or to a court proving that Jack belonged to ISIS or that he had engaged in anything like the kinds of wrongdoing alluded to by media lies – something UK officials no doubt would have done if they could when they put Jack’s parents on trial. After he had been in Syria for about a year, Lane said that Jack started to send them “desperate messages saying the he needed to get out, that ISIS were hunting him, and we needed to pay a people smuggler.” Experts in the field affirmed for them that this was indeed the only way to get him out, and initially police in the UK gave them permission to send him money to escape. Then, Lane said, the police “withdrew that permission after three days and said they changed their mind. And they arrested us for funding terrorism.”

In the years that their case was before the courts, Lane and her husband were not able to rebut the lies being told about their son in the media, under threat of contempt-of-court charges. They were ultimately acquitted at a trial in London’s Old Bailey – a resolution based on the defence that they were sending money to Jack to save his life, according to Lane, meaning that the court recognized that Jack was “running for his life” in IS territory. But since their acquittal, they have had very little luck in getting mainstream journalists to take an interest in the extensive evidence they have in their possession that contradicts the earlier lies published about their son. She said, “All this information has never come into the public domain. I’ve tried very hard. I’ve sent the original messages to journalists, both in the UK and in Canada. And they won’t publish them.”

In 2017, Jack somehow ended up in the custody of Kurdish forces in northeastern Syria – he may have been captured while trying to flee among refugees, or he may have been sold to them as a potentially high-value foreign captive, it is unclear. That makes him one of more than 40 Canadian Muslims currently detained by Kurdish forces in Syria, most of whom are women and children, all of whom are being held in terrible conditions.

In 2019, after Lane and her husband were acquitted, the UK government stripped Jack of his UK citizenship, so Lane moved to Canada to pursue her son’s case here. In an earlier period, the Canadian government had sounded somewhat supportive in response to inquiries about Jack’s case. But, Lane said, “At one point in 2018, everything changed. All the positive messaging completely shut down and became one paragraph – we have no consular assistance, we closed our embassy in 2012, there’s nothing further we can do. And that is the battle we have been fighting ever since.”

Currently, Lane is pursuing two courses of action. One is a court challenge being mounted by the families of a number of Canadians detained in northeastern Syria, which is expected to be heard in June. They are asking the court to force the federal government to act on its responsibilities towards citizens and help them return home. This is in line with earlier cases, such as that of Abousfian Abdelrazik, whom the federal government refused to repatriate from detention and torture in Sudan until a federal court ordered them to do so.

The other course of action, though lawyers advised against it, is a public campaign. Lane had been engaged in some low-key activism to try to get organizations to take a stand in support of Jack and the other detainees, with little luck. She said,”I thought, it’s just not working. If I don’t go public, then I won’t have a son.”

The campaign is being organized in conjunction with Behrens, who among other things has been active since the early 2000s in a number of the secret trials and rendition to torture cases. The campaign includes an online petition, a chain fast, a vigil in front of the Prime Minister’s residence, other public events, a social media campaign, and lots of advocacy.

A key goal of the campaign is to chip away at the baseless rhetoric from politicians and media portraying Jack as a monster, and instead to humanize him. They are demanding that the Canadian state meet its obligations and bring him home. And in so doing, they are making it clear that, like most of the other Muslims that the Canadian state has targeted over the last two decades, no evidence has been presented showing any wrongdoing on Jack’s part – and even if there had, that should not lead to him being deprived of basic due process, citizenship rights, or human rights.

Behrens said, “We are seeing the fruits now of decades of governmental abuses being committed against marginalized and stigmatized communities. And I think that if you have a doubt about Jack or any of the detainees, look at the record of the organizations and the politicians who are making accusations and see that persistent period of dishonesty, deception, reliance on torture, racism, Islamophobia, and violence, and ask yourself, who do you really trust here? … As Sally said, [Jack] was in touch for many years. She knew what was going on. She knew what he believed in. And it was very clear that he was not this monster that he had been made out to be. … And when you do speak up, you’re speaking up not only for Jack and these detainees, but you’re also speaking up for a democratic process, which has been so seriously eroded over the last few decades in the name of national security, that it’s really quite shocking how few rights are left that are being respected for those who are marginalized.”

Image: Used with permission of Sally Lane and Matthew Behrens.