McGill must refrain from bulldozing alleged unmarked graves before any investigation

McGill must refrain from bulldozing alleged unmarked graves before any investigation

Kanien’kehà:ka Kahnistensera (Mohawk Mothers) demand that the Pope must leave our land and take the cross and all of the symbols of their atrocities with him
by
Mohawk Nation News 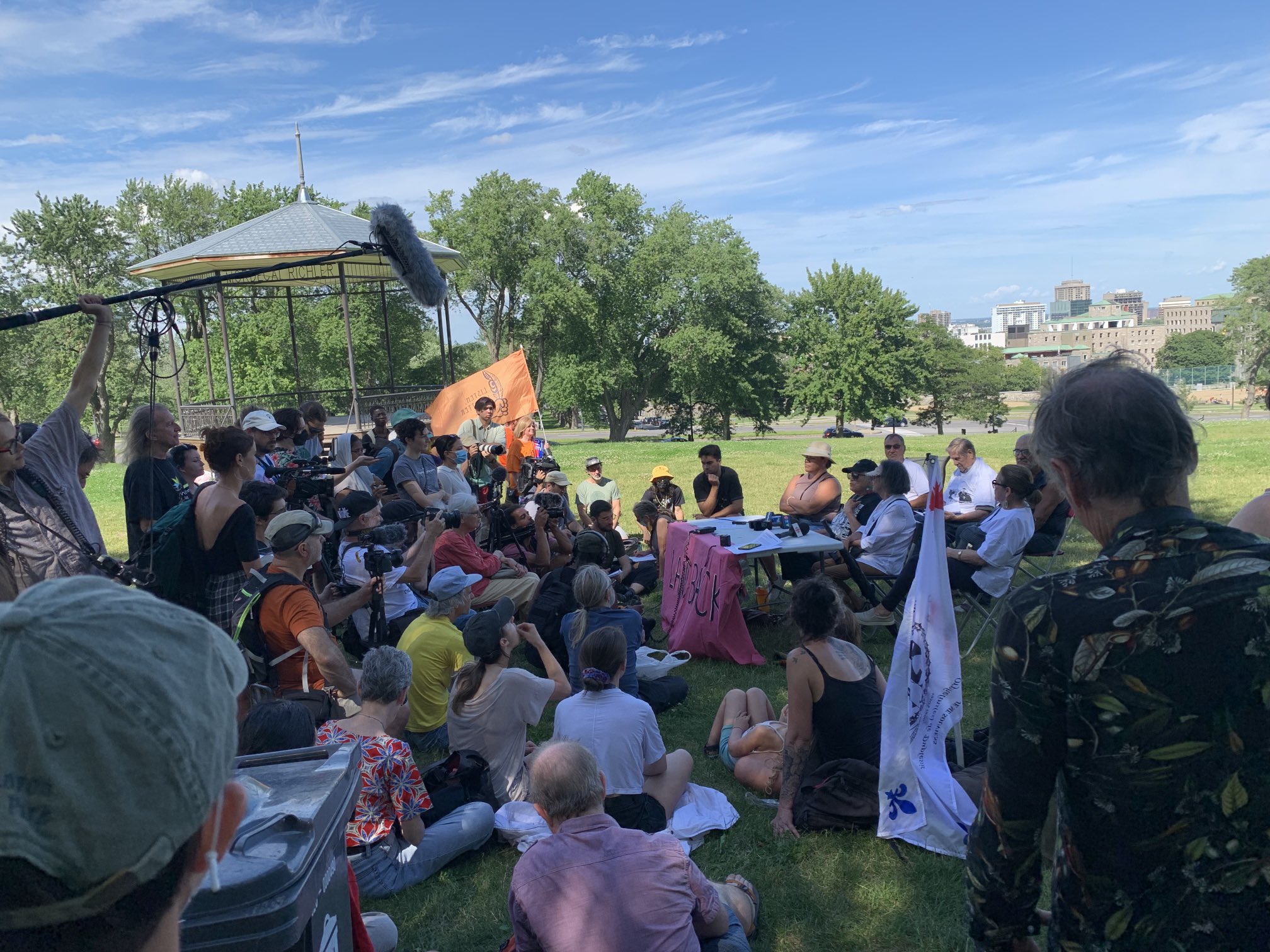 Kanien’kehà:ka Kahnistensera (Mohawk Mothers) demand that the Pope must leave our land and take the cross and all of the symbols of their atrocities with him. Indigenous people see it as how the Jewish people see the swastika. McGill must refrain from bulldozing alleged unmarked graves before any investigation.

“The pope must leave and take the cross with him,” demand the Kanien’kehà:ka Kahnistensera (Mohawk Mothers), who are carrying out their duties under the direction of the great peace kaianerekowa, and to stop the unmarked graves from being bulldozed by McGill University, which is now in Quebec’s Superior Court. They are trying to desecrate a crime scene, which violates their own law.

The Kanien’kehà:ka Kahnistensera (Mohawk Mothers) joined by their 50+ supporters had a rally and press conference to share updates on their attempt to stop McGill University from conducting excavation work on the grounds of the Royal Victoria Hospital, regardless of allegations of unmarked graves of Indigenous children. The rally and the press conference took place yesterday at the Mordecai Richler Gazebo at the foot of the unceded kanien’kehà:ka homeland of tekanontak (Mount-Royal), which all parties concede is all indigenous land as caretakers for future people.

On July 26th, 2022, a case management conference at the Quebec Superior Court in Montreal confirmed that McGill University intends to start building its “New Vic” campus in October 2022, in an area adjacent to McGill’s psychiatry department, the Allan Memorial Institute, where infamous CIA-funded Mk-Ultra “mind control” experiments were conducted in the 1950s and 1960s. The kahnistensera fear that forensic evidence of criminal research activities will be destroyed if the land is excavated before a thorough investigation is made to their satisfaction. The Superior Court will hear the kahnistensera’s demand for an interlocutory injunction against the construction project on October 26th 2022.

Meanwhile, the Société québécoise des infrastructures (the alleged owner of the Allan Memorial Institute), McGill University, the government of Canada and the City of Montreal are encouraging the desecration of the unmarked Indigenous graves situated on the former Royal Victoria Hospital and Allan Memorial sites, unceded land traditionally known as tekanontak, “two mountains” (Mount Royal). McGill University is being permitted to go forth with their $700 million “New Vic” project in the guise of furthering public policy and sustainability research.

Out of “common decency,” the kahnistensera ask a commitment from McGill university to not desecrate the bodies of their ancestors and children before the truth is known about the medical crimes committed on those lands. Instead, they demand McGill to provide access to archives so that proof of the graves can be ascertained. Furthermore, it is unceded Indigenous territory and its stewardship should remain in Indigenous hands. All permits for any construction can only be provided by the kanionkehaka, the rightful owners of the land.

The kahnistensera, as Mohawk women traditionally vested with the responsibility of caretaking the land, also denounced the visit of Pope Francis to Turtle Island. “He did not apply for permission from the true indigenous people to enter turtle island. He is not welcome and not wanted. He is just another trespasser,” said the kahnistensera. The legacy of the Catholic church on turtle Island is indisputably tied up in the genocide of Indigenous Peoples through residential schools and other oppressive and assimilationist practices evidenced in the thousands of unmarked graves discovered across the country to date. Millions more expected to be found. Canada hired the churches to carry out the genocide.

According to the Mothers, confronting the reality of these unspeakable crimes involves more than just words —it requires tangible action, particularly the dismantlement of the colonial oppressive apparatus called “Canada.” Apologies are unacceptable. Real action starts by “cancelling the ‘doctrine of discovery.’ No one can discover something that was not lost! [Mad Bear Anderson]. This is the only argument they use to justify their genocide,” said kahentinetha at the Rally and press conference. This goes for all of the indigenous people of the Western Hemisphere. There is no statute of limitation on such crimes against humanity.

Real action means taking accountability for what has been done which can never be rectified by “giving back” something they never owned. The churches and Canada still exist and are responsible for their crimes. This stands in stark contrast to the Pope’s slap in the face to all indigenous people, such as “prayers,“ phoney apologies, empty promises and continuing genocide. These cannot heal or help the countless lives taken and harmed by the Catholic church and other evil denominations. “The Pope doesn’t have any business coming over here. And all of these people, that were involved in the biggest genocide/holocaust in world history, are walking around free as a bird and being glorified by the state, the politicians, the banks,” and the sheep, emphasized kahentinetha. They should join in finding these graves. “The cross must come down” was one of the main demands of the kanien’kehà:ka kahnistensera, referring to the 31 meters tall cross on top of Mount Royal. “It’s a symbol of murder, rape, violence, oppression and abuse of genocide power,” said karakwiné, one of the Mohawk Mothers, as she felt the pain of so many of her ancestors. The cross as a symbol of human cruelty was also highlighted by the Duplessis Orphans who were present and recounted the stories of sexual abuse and oppression they experienced at the hands of the priests.

This demonstrated an alliance between peoples who suffered inhuman and cruel treatment under the stewardship of the church. “The cross is a symbol of power that was used to abuse children,” said Hervé Bertrand of the Duplessis Orphans. The kahnistensera invite all people in solidarity with the cause to help them prevent the desecration of the graves of Indigenous children and ancestors before their next hearing, on October 26th.