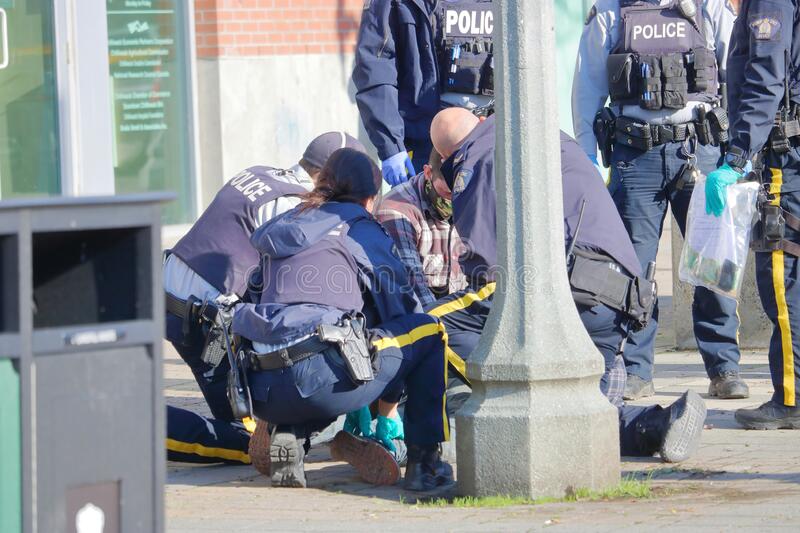 At least 10 people were killed by police, or died through police actions, in July 2022. So far this year there have been at least 64 police-involved deaths in Canada.

RCMP were responsible for six deaths. This includes four by RCMP in British Columbia and one each by Manitoba RCMP and Saskatchewan RCMP. Toronto Police Services (TPS), Manitoba First Nations Police Service (MFNPS), Ontario Provincial Police (OPP), and Saint-Jean-sur-Richelieu Police Department (SPSJSR) were responsible for the others. Five people were shot and killed by police in July. There were three deaths in custody. One person died from reportedly self-inflicted injuries and one person died in a fall. At least three of the victims have been reported publicly to be Indigenous.

As always, it must be stressed that these numbers represent an undercount. There is no formal system of reporting police killings that is shared across departments or provinces in Canada so we can only say that at least this many lives have been taken through police actions.

A Shamattawa First Nations man who was shot by RCMP officers on July 2, died of his injuries on July 9.  The shooting occurred in the northern community of Shamattawa at around 1 PM.

The Independent Investigation Unit (IIU) reports that officers had responded to a call regarding a man who had allegedly fired a gun inside a Shamattawa First Nation house and was walking with the firearm in the community. RCMP officers claim they heard shots while on patrol and located a man outside a house. Police claim there was a shootout, and the man was shot. He was taken to the Shamattawa nursing station before being airlifted to Health Sciences Centre in Winnipeg, about 745 kilometers away.

Garrison Settee, grand chief of Manitoba Keewatinowi Okimakanak, which represents northern First Nations in Manitoba, reported at the time of the shooting that the man had been shot 11 times.

The RCMP have not commented and none of the police claims have been confirmed publicly.

A man died in police custody following his arrest by the Manitoba First Nations Police Service in Long Plains, Manitoba on July 9. The Independent Investigation Unit (IIU) reports that at approximately 2:17 PM, a male was arrested under the Intoxicated Persons Detention Act and detained at the Long Plains MFNPS detachment. At around 3:21 PM, he was found unresponsive in his cell and was transported to the Portage la Prairie District Hospital, where he was later pronounced dead.

A 26-year-old man died in Toronto Police Service custody after being arrested on July 9. The Special Investigations Unit (SIU) reports that Toronto Police Service (TPS) officers were called to a residence near Finch Avenue East and Leslie Street regarding a man with a knife making threats and in mental distress at around 10:30 PM. Two TPS officers arrested the man, and he went into medical distress. He was transported to hospital where he was pronounced dead shortly after midnight on July 10.

The Independent Investigations Office (IIO) of British Columbia is investigating the death of Rojun Alphonse a 36-year-old Williams Lake First Nation man who was in distress during a police action in Williams Lake on July 10. They report that police responded to a report of a man in distress and allegedly in possession of weapons at a residence in the 700-block of 11th Avenue.

Police and members of the Emergency Response Team arrived and allegedly tried to communicate with Mr. Alphonse for several hours. At approximately 12:30 PM, police entered the residence and reportedly found him suffering what police say appeared to be self-inflicted injuries. He was pronounced dead at the scene.

There have been numerous cases in Canada in which people in crisis have taken their own lives when confronted with police instead of health care or support workers. Police are not about health care and should not be involved in mental health calls.

A man died in a fall during an RCMP action in Mission, British Columbia, on July 16. The Independent Investigations Office reports that RCMP officers responded to a report of “a man pacing the northbound sidewalk” of the Mission Bridge in the early morning.

According to the IIO, officers claim the man climbed over the railing and fell into the river when they tried to arrest him. The man was found a short time later and pronounced dead at the scene.

Police are not an appropriate response for people experiencing crisis. There have been numerous cases in Canada in which people in crisis have fallen to their death when confronted by the violence of policing.

RCMP shot and killed a 27-year-old man, later identified as Ryan Booker, on Highway 1 in Saskatchewan, near Belle Plaine. It is reported that police were notified at 1:10 AM, regarding a man sitting in his car, uttering threats. The man in question reportedly drove from the Superstore parking lot in Moose Jaw before pulling over near Belle Plaine.

SWAT and RCMP Critical Incident Response Team went to the scene in Moose Jaw near Belle Plaine, and redirected traffic off the highway. RCMP claim the man in the vehicle pointed a gun at officers at around 7 AM, and they shot him.

A 66-year-old man died while being arrested by Ontario Provincial Police officers in Long Sault, Ontario on July 22. The Special Investigations Unit reports that OPP officers were stopping vehicles at around 12:20 PM on Highway 401 at the westbound off-ramp at Moulinette Road.

The man allegedly left the area in a vehicle and officers found the vehicle in a cornfield and arrested him. At some point during the arrested the man went into medical distress. He was declared dead at the scene.

RCMP shot and killed a man in Nanaimo, British Columbia on July 23. It is reported that officers were called to an alleged confrontation between a man and woman outside a vehicle. Police claim that the man produced an unspecified weapon when officers arrived. They shot the man and he died at the scene.

None of the police claims have been publicly confirmed.

RCMP shot and killed Jordan Daniel Goggin (28) of Surrey, following a shooting spree targeting unhoused people in Langley, British Columbia on July 25. Goggin is alleged to have shot four people, killing two. Those killed have been identified as Paul David Wynn (60) and Steven Furness (43). Mr. Wynn was shot and killed outside the Creek Stone Place supportive housing complex on 201 Street around 3 AM. Mr. Furness was killed near the Langley City bus loop at Logan Avenue and Glover Road just after 5 AM. The shooting allegedly occurred over a period of as much as six hours.

Police reported that they believe the first shooting took place at around 12:01 AM at the Cascades Casino, at Fraser Highway and 203A Street. A woman who is unhoused was critically injured.  A fourth person, a man, was shot at around 5:45 AM.

Goggin was shot near the Willowbrook Mall, at 200 Street and the Langley Bypass shortly after the fourth victim was located nearby.

Saint-Jean-sur-Richelieu Police Department (SPSJSR) officers shot and killed a 48-year-old man who had seriously injured two people inside his home in Montreal’s South Shore. It was later confirmed that the man in question was an RCMP officer.

The Bureau des enquêtes indépendantes (BEI) reports that local police received an emergency call a bit after 2 AM in which a man said that he had “committed the unthinkable.” When police arrived at the home on Biat Street, a man confronted them with a knife. Police opened fire and struck the man with at least one bullet. He was transported to hospital where he later died.

When police entered the home, they found a woman and a teenager who had both suffered serious injuries. They were taken to hospital in serious condition. Provincial police have reported that the woman’s injuries were the most serious.

RCMP spokesperson Corporal Tasha Adams confirmed to the Canadian Press that an RCMP officer was killed in the incident. The RCMP have not confirmed his identity publicly.