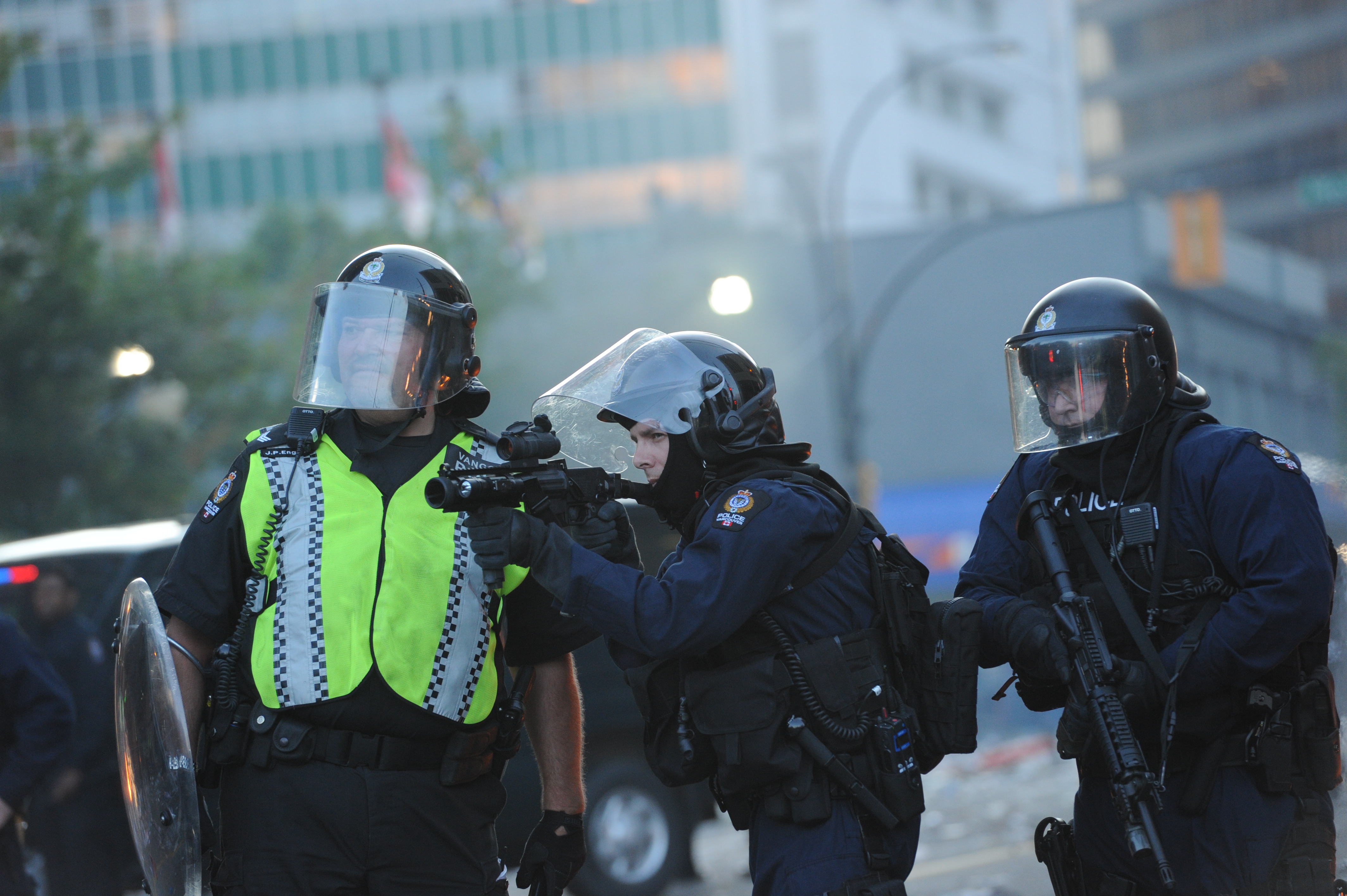 Two-thirds of the way through 2022, Canadian police are on pace for an even deadlier year than they had in 2021, when there were at least 104 police-involved deaths. As of the end of August, at least 76 people have been killed by police or died through police actions. This comes after a month in which at least a dozen lives were taken. That matched June and April as the deadliest months of Canadian policing this year.

In August, at least eight people were shot by police. And this involved eight different police forces. Three people were killed in police vehicular pursuits. One person in crisis allegedly took their own life during a police action. Two of the people killed have been identified publicly, Chris Amyotte and Abdulla Shaikha.

There is no formal system of reporting police killings that is shared across departments or provinces in Canada so we can only say that at least this many lives have been taken through police actions. As always, it must be stressed that these numbers represent an undercount.

Montreal police (SPVM) officers shot and killed 26-year-old Abdulla Shaikha at a motel on Marcel-Laurin Boulevard in the Saint-Laurent borough on the morning of August 4. Police believe the man was involved in a series of apparently random shootings in and around the city over a 48-hour period.

Quebec’s police oversight, the Bureau des enquêtes indépendantes  (BEI), report that officers from the SPVM’s tactical squad started searching the motel around 7 AM. They also claim that police were confronted by a man with a firearm and opened fire. The man was struck by at least one bullet and was pronounced dead at the scene.

It has been reported that Montreal police had knowledge of the man through 911 calls about mental health. Documents obtained by Radio-Canada show that Abdulla Shaikh had been previously diagnosed with schizophrenia.

François Legault, the lawyer who represented Shaikh during a hearing in March hearing has questioned police actions in quickly killing Shaikh. In his words: “I’m asking myself a lot of questions. I don’t have the answers. I hope to get them one day and know if the [police] operation was carried out a bit too quickly. Did we try every measure to establish a level of communication that was adapted to [Shaikh’s] situation?”

The BEI is not an independent oversight agency and relies on other police forces for their investigations. Police claims have not been confirmed publicly.

A woman and a man were killed in a police chase by Abbotsford Police Department officers. The Independent Investigations Office (IIO) reports that at 3:02 PM, Abbotsford police spotted a car, a white 1991 Acura Integra, being driven in the area of Livingston Avenue and Maclure Road before losing sight of it. They believed the vehicle to be stolen.

Abbotsford police relocated the car at 4:11 PM and decided to engage in a pursuit. During the chase, the pursued car lost control and crashed in the 31000-block of Maclure Road.

A woman passenger died at the scene. The man alleged to be driving was taken to hospital, where he later died of his injuries.

Police chases are extremely dangerous and have resulted in many deaths in the Canadian context, including killings of pedestrians and uninvolved occupants of other vehicles. Police should not engage in such pursuit and departments know this full well, and certainly never for alleged property crimes.

Alberta RCMP shot two people, killing one and leaving the other in critical condition, in Smoky Lake (110 kilometers northeast of Edmonton) in the morning of August 8. It is reported that events leading to the shooting began around 7:30 AM, when officers were called to Saddle Lake Cree Nation regarding an alleged abduction.

RCMP claim that two people, one man and one woman, left the area in a red pickup truck. An hour and a half later they issued a warning on social media that they were pursuing a 1997 red Dodge pickup in the area of Smoky Lake, around 60 kilometers west of Saddle Lake Cree Nation.

RCMP say they located the truck at 10:20 AM, and put out another social media statement saying the two individuals were “no longer at large” at 11:00 AM, but offering no further details.

RCMP have only said that at some unspecified time, some sort of unexplained “interaction occurred” involving a “confrontation” that ended with both people being shot by police.

It has been reported that a 25-year-old man was taken to hospital with injuries that are consistent with gunshot wounds.

Toronto Police Service (TPS) officers shot and killed a 42-year-old man on the afternoon of August 13. The Special Investigations Unit (SIU) reports that TPS officers responded to a 911 call at 2:30 PM regarding a woman being seriously injured near a residence on Midland Avenue near Kingston Road in Scarborough.

Police encountered a man, who they believed to be involved in injuring the woman, and who allegedly had a knife. They claim the man took hold of a young child and entered a residence.

RCMP shot and killed a man north of Walhachin near Kamloops in the early morning of August 15. The IIO report that at around 5:20 PM on August 14, police responded to a report regarding a man allegedly confining a woman and child. Another call reported a woman trying to get out of an erratically moving vehicle. A third call reported that the caller’s relative and a child had been abducted.

Members of the Emergency Response Team (ERT) were deployed, and located a vehicle on Deadman Vidette Road, about 14 kilometers from the Trans-Canada Highway. This was at around 9:00 PM. At approximately 3:00 AM in the morning of August 15, 2022, at least one officer shot the man. He was pronounced dead at the scene. Police claim that the man was in possession of a weapon.

A woman was taken to the hospital for non-life-threatening injuries. A child at the scene was uninjured.

A Windsor Police Service (WPS) officer shot and killed Allan Andkilde (70) on the afternoon of August 15. The Special Investigations Unit reports that at approximately 2:30 PM, police were called to the intersection of Wyandotte Street East and Ouellete Avenue in the city’s downtown regarding a man allegedly wielding a machete and threatening people.

Windsor Police Service officers located a man, and one officer deployed a Conducted Energy Weapon, while another officer shot him. Mr. Andkilde was transported to hospital, where he later died.

A 28-year-old man was killed in a police vehicle pursuit in Ottawa on the night of August 16. It is reported that an Ontario Provincial Police officer was doing radar enforcement in the area of Highway 416 at around 10:42 PM and saw a vehicle allegedly travelling at a high speed. The officer undertook a pursuit and later located the vehicle after it had hit a pole on Dilworth Road. The man in the vehicle was pronounced dead at the scene.

A 49-year-old man died with Sûreté du Québec (SQ provincial police) present on August 20, in La Motte. The BEI report that around 5:05 PM, SQ officers were called to intervene in connection with “an individual who had made suicidal remarks.”

Upon arrival at the scene, officers reportedly located a man outside a residence and in possession of a long gun. The police engaged in some sort of interaction with the man, who then entered the house before coming out a few moments later and allegedly turning the weapon on himself. He was pronounced dead at the scene.

Policing is not health care and there have been numerous cases in Canada in which people have taken their own lives when police arrive instead of mental health supports, as I have reported previously.

Vancouver police officers killed Chris Amyotte, an Ojibwa man who was in distress in the morning of August 22 in the city’s Downtown Eastside. Mr. Amyotte was born on the Ditibineya-ziibiing (Rolling River) First Nation in southern Manitoba. He is survived by eight children. He had only been in Vancouver to visit family for less than a week before police killed him.

The Vancouver Area Network of Drug Users (VANDU) report that Mr. Amyotte had stripped off his clothing and was screaming for help after being bear sprayed. Other witnesses report that he entered a convenience store for milk and was pouring milk on himself to treat the bear mace when police arrived. Police reportedly shot him multiple times with a beanbag gun and took him into custody. Mr. Amyotte went into medical distress and died on the street.

Witnesses have since said that Mr. Amyotte was pleading for help because of the macing. They also report telling police about the situation and explaining the cause of his actions. Police appear not to have taken any of that into account before deciding to act with violence.

VANDU is conducting a community investigation into the VPD killing of Mr. Amyotte. Information can be sent to tips@vandu.org. Some witness testimony has been published as part of a community statement.

Vancouver police have killed at least three people, two in the Downtown Eastside, so far this year.

A Halifax Regional Police officer shot and killed a 59-year-old man in Dartmouth, Nova Scotia on August 27. It is reported that police responded to a weapons complaint on Carleton Street at approximately 8:30 PM. Police claim a man with a firearm had barricaded himself inside a home and while attempting to arrest him, a confrontation occurred and an officer shot him. The man was pronounced dead at the scene.

Winnipeg Police Service (WPS) officers shot and killed a man in the early morning of August 27.  The Independent Investigation Unit of Manitoba (IIU) reports that WPS officers were conducting a traffic check stop near the 1400 block of Portage Avenue at Empress Street at around 1:50 AM, when the driver of a 2021 Chevrolet Camaro SS failed to slow or stop and continued westbound on Portage Avenue. Police used the WPS helicopter, Air 1, to track the vehicle near Bishop Grandin Boulevard. Two WPS officers went to the residence of the registered owner of the vehicle and were there when it pulled into the rear of the residence at approximately 2:12 AM.

Police claim that the driver of the vehicle stopped, exited the vehicle, and advanced towards them with a weapon. The two WPS officers fired their service weapons, striking the man several times. The victim was transported to Health Sciences Centre, where he died of his injuries.

None of the police claims have been publicly confirmed, including whether the man had a weapon or, if so, what the item consisted of. One witness has reported hearing as many as 10 shots.