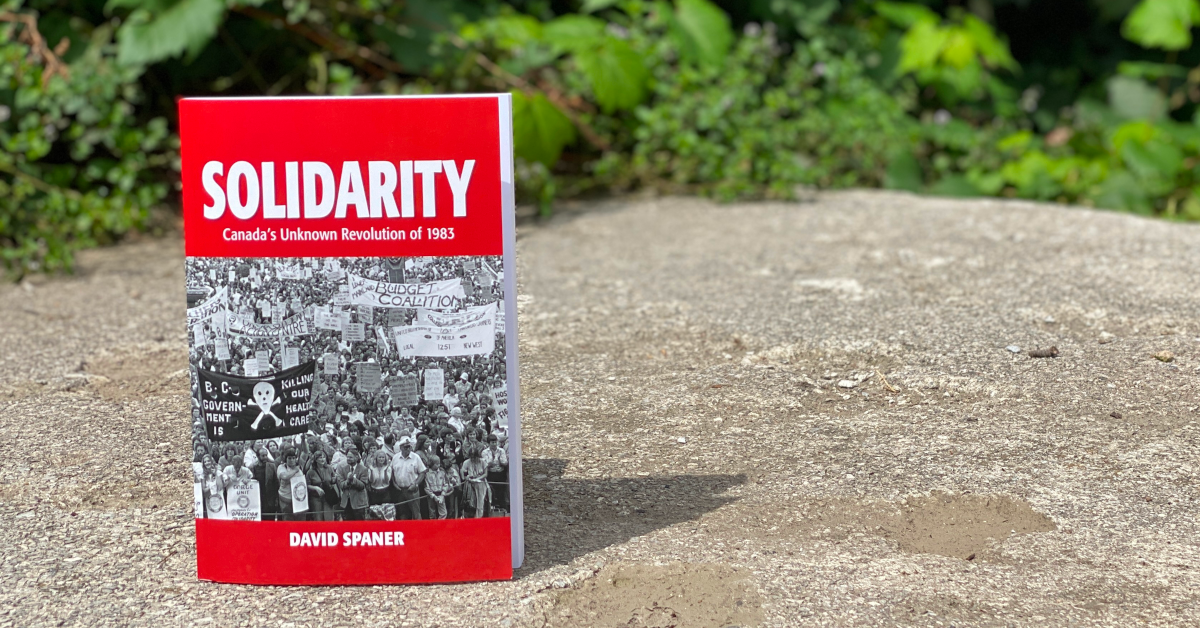 David Spaner is a long-time Vancouver-based writer and the author of Solidarity: Canada’s Unknown Revolution of 1983 (Ronsdale Press, 2021). Scott Neigh interviews him about the book and about the uprising against a right-wing government in British Columbia that it documents.

Despite happening well within living memory, being one of the largest grassroots uprisings in Canadian history, and coming within a hairsbreadth of turning into a general strike, the struggle at the centre of today’s episode has received little attention in historical and cultural work, and is little remembered. So David Spaner decided to write a book about it. Solidarity is heavily based on interviews with participants in the uprising and is told largely through people’s experiences, while also drawing plenty of connections with broader histories. He describes the book as “literary nonfiction” in its approach.

One part of Spaner’s inspiration for writing this book was that he lived the events that it discusses. Back in 1983, he had been part of movements himself and was already a writer, having cut his teeth in the underground press. He had just gotten his first mainstream position at a daily newspaper in Vancouver, where he covered these events first-hand.

In those years, BC’s electoral politics were split between the hard-right Social Credit Party and an NDP still quite a bit to the left of today's iteration of it. After winning an election they had been expected to lose, the SoCreds – in the spirit of Ronald Reagan and Margaret Thatcher – introduced 27 pieces of legislation in one day, attacking pretty much every service, right, and sector of the population you would expect a right-wing government to attack.

British Columbia in those years was also a vibrant hub for social movements and had been for decades, from radical left political organizations and left-wing unions in the first half of the 20th century, to the upsurge in New Left movements in the 1960s and 1970s. Though things had faded somewhat by 1983, there was a still a sizeable and active labour movement and lots of participants in and veterans of other movements, who were very much opposed to what the SoCreds were doing and who knew how to organize. And there were significant layers of the broader population who had perhaps never been active themselves but who had been shaped by those movements and knew which side they were on.

The initial shock and anger at the legislative onslaught became conversations and meetings, and soon escalated to demonstrations, marches, and even occupations. (A particularly celebrated occupation took place in Kamloops, when the workers at a mental health facility took it over, barred management, and ran it for themselves for a period of time.) The resistance cohered into two distinct but often co-operating coalitions. Operation Solidarity brought together the unions, both those in the BC Federation of Labour and others. And the Solidarity Coalition brought together pretty much all of the other popular movements in the province, including Women Against the Budget, a powerful coalition of women’s groups.

It was one of those moments that took on a spirit and a momentum that happens only once or twice in a generation. People were working tirelessly and extending the reach of movements to different communities, different workplaces, different segments of the population. And people were responding, in unprecedented numbers – with their presence at protests, with their enthusiasm, and with their energy.

In the inevitable discussions about how to move forward, how to continue escalating, how to win, there was vocal support in both branches of the Solidarity movement for the idea of a general strike. And in contrast with our current era, where it feels like calls for a general strike never get past being a hashtag and a hazy dream, pretty soon it was well on its way to happening. The plan was for the unions to go out in a staggered way, and by the climax of the struggle in October, the province’s teachers, the main provincial public sector union, and a number of other unions were out.

That is, alas, where it ended – suddenly, in an act widely characterized as a betrayal, and with consequences that echoed through BC movement politics for decades after. A subset of union leaders did not want a general strike, and at least some seemed actively hostile to the basic goals of elements of the Solidarity Coalition like the women’s movement and the gay movement. They made a separate deal with the province that carved out a few modest gains for unions, and nothing for anybody else.

While this moment of devastating defeat is one obvious source of lessons for latter-day activists, Spaner also encouraged readers not to let that overshadow the reality of the powerful, participatory, and highly democratic movement that the people of BC were able to create. He said, “I think that the overall legacy of Solidarity is much greater than its anti-climactic ending. I think it basically showed how people from various backgrounds, various political ideas, can join together and form a powerful coalition. And I think a lot of the message of that is that if you’re going to make fundamental social change, you have to do it not just with people that are exactly like you. It takes a coalition like this. And despite its failings, and its inner conflicts … there was the idea that all these people [that] had been organizing in their own silos, like maybe around environmental issues, or around the feminist movement or whatever, were suddenly organizing with each other around the same thing, which was stopping SoCred devastation. And so the idea that they could do that, I think, is really the legacy of the Solidarity Movement.” Even if it did not ultimately succeed, it was a glimpse of the power that popular movements can have.

He originally started writing the book as a way to preserve the memory of some important but little-known history – in particular, he said, it was “a really important thing to document when there’s still people around to talk about it.” However, he said, “While I was writing it, the last few years, a whole other motivation came along, which was at least as important. And what that was, there was a rise of far-right governments around the world.” He came to see the Solidarity uprising of four decades ago as very relevant to today, as “a lesson on how to mobilize virtually an entire community against a far-right government. And, you know, there were some divisions and some problems at the end. But for much of those four months, it was incredibly effective. And it was able to mobilize people in a way that no one had seen before here, or has seen since.”