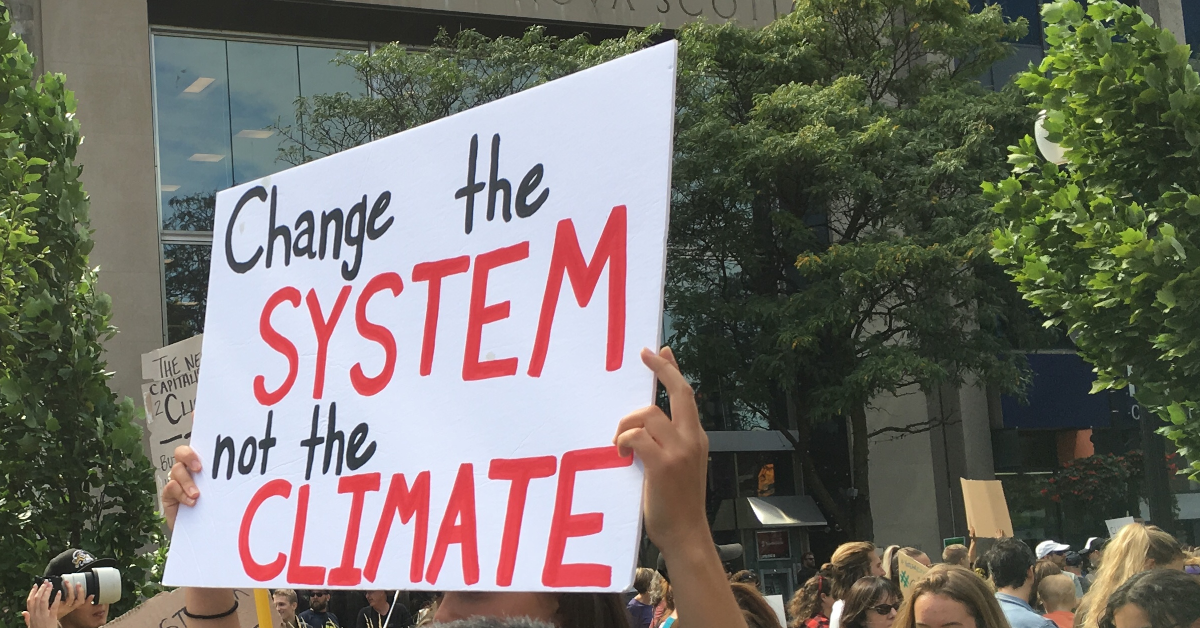 Betty Plewes is a co-founder and steering committee member of Climate Legacy, a group of retired people working together to engage and mobilize other older adults in climate action. Emma Bider is the organization’s communications coordinator. Scott Neigh interviews them about the roles that seniors are playing in addressing the climate crisis.

In the last five years, both the mainstream media and substantial elements of the climate movement itself have often centred the role of youth in narratives of the struggle for climate action. There are lots of good reasons for this, not the least of which is the incredible activism and organizing being led by youth around the world. But it is also important to pay attention to the growing engagement in these issues at the other end of the age spectrum, among people variously characterized as “seniors” or “older adults”.

Plewes is retired, after spending most of her life working for Canadian non-profit organizations focused on international co-operation and development. Her work included lots of policy analysis and policy advocacy, as well as organizing on-the-ground campaigns. Though international development work and environmental concerns often significantly overlap, Plewes herself had not really been directly involved in climate issues. But in 2018, she read that year’s report from the Intergovernmental Panel on Climate Change (or IPCC), the United Nations body responsible for assessing and synthesizing humanity’s knowledge of the climate crisis, and she knew she needed to act.

Her first step was to start talking about the issue with other people that she knew, many of whom were also retired or late-career workers from the international co-operation and development sector. Pretty soon, there was a group of them interested in taking action together, specifically to mobilize other older adults around climate issues.

To begin figuring out what exactly that could mean, they organized a series of focus groups with seniors. Encouragingly, they found that lots of older adults are concerned about the issue. On the one hand, according to Bider, “I think there are a lot more seniors doing activism or doing organizing than we realize.” At the same time, many were not sure quite how to get involved, and it was here that they began to identify a role for themselves.

Older adults, they realized, could bring some important assets to the climate movement. Often, if they were retired, they could bring time. Some could bring money, not necessarily in the form of substantial wealth but at least for middle-class seniors in the form of pensions and modest retirement savings, that could be a starting point for campaigning for fossil fuel divestment. Seniors also have a political voice that politicians are more likely to listen to, because they are known to vote at higher rates than younger people. And, finally, they have whatever skills they have developed over their lifetime.

Under the name Climate Legacy, the group then applied for and received a small grant to do work related to climate communications targeted specifically at older adults. They hired Bider – a now-30 year-old communications professional who is doing a PhD at Carleton University in Ottawa in anthropology – to do that work. During that process, they developed connections with around 30 existing groups of older adults already engaged in climate action across Canada. After much consultation and discussion, they decided that the best focus for Climate Legacy would be to act as a sort of hub for a loose network of these existing groups.

As well, they specifically focus on work related to financial questions and the climate crisis. Plewes said, “Money has been of a lot of interest to our group. Our analysis is that how it is invested is a huge element of the climate crisis. … We’ve been trying to encourage people to divest from fossil fuels. But it’s not just a question of divestment. It’s also a question of reorienting that money to climate solutions.” She continued, “Also, most seniors have some kind of pension funds, and the pension funds are very big actors in terms of fossil fuel investments. And as a group, you can bring pressure to bear on your pension plan managers – again, moving away from fossil fuel investments and towards more renewables.”

In general, Climate Legacy does a lot to circulate and amplify material related to the work of their network partners through social media, their website, a monthly newsletter, and other mechanisms. They have also produced their own resources related to, again, financial questions and climate, as well as material related to practices for engaging with seniors about climate issues. They have hosted lots of webinars, and have developed seniors-focused climate communications material for elections. And they have collaborated with other groups to support organizations and individual seniors in contributing to government consultations around climate.

Bider said that “there is very, very little research” on how best to communicate about the climate crisis specifically to seniors, or about why variously situated older adults do or do not become active on the issue. Through the published literature that does exist and through their own work, they have identified a number of important factors. For one thing, Bider said, “Be concise and specific to people’s localities” because often older adults, particularly those who have lived in the same place for much of their lives, have “a lot of care for place. So it’s important to talk about how that place is being impacted by climate change and what the risks are.”

She also recommended that “finding common ground” as a starting point for conversations about climate “can build trust,” though she concedes that as the issue has become increasingly polarized, that is “maybe getting harder to achieve.” Taking communication efforts at least partially offline can be important, because while lots of seniors make use of social media and other online platforms, there are still many that do not. As well, she said, “We’ve been in a pandemic where we don’t talk to a lot of strangers … so developing scripts” or at least talking points can make such conversations easier.

And, crucially, Bider pointed to the increasingly common insight that “facts don’t change minds, friendship does” as important for working with any demographic, not just older adults. She emphasized that facts are certainly very important, particularly when it comes to an issue that has been subject to as much disinformation as this one, and she laughingly shared that not all network partners of Climate Legacy were appreciative of this quote when she included it in a resource from the group. But, she said, the role of relationships in changing minds is central. And “building relationships, though it may take longer than listing off a series of facts about how much time we have left and how much more we need to do … enables longer term actions as well, as you develop that friendship and develop it for the long term.”

At the moment, Climate Legacy is in the process of taking stock of their initial period of work and deciding on future priorities. As it becomes safer to do so, they want to engage more with seniors in in-person events, and are developing pilot projects to explore approaches for connecting specifically with older adults who are concerned with the climate crisis but not yet involved in any way. And they are keen to find opportunities for intergenerational dialogue with youth who are active on these issues.