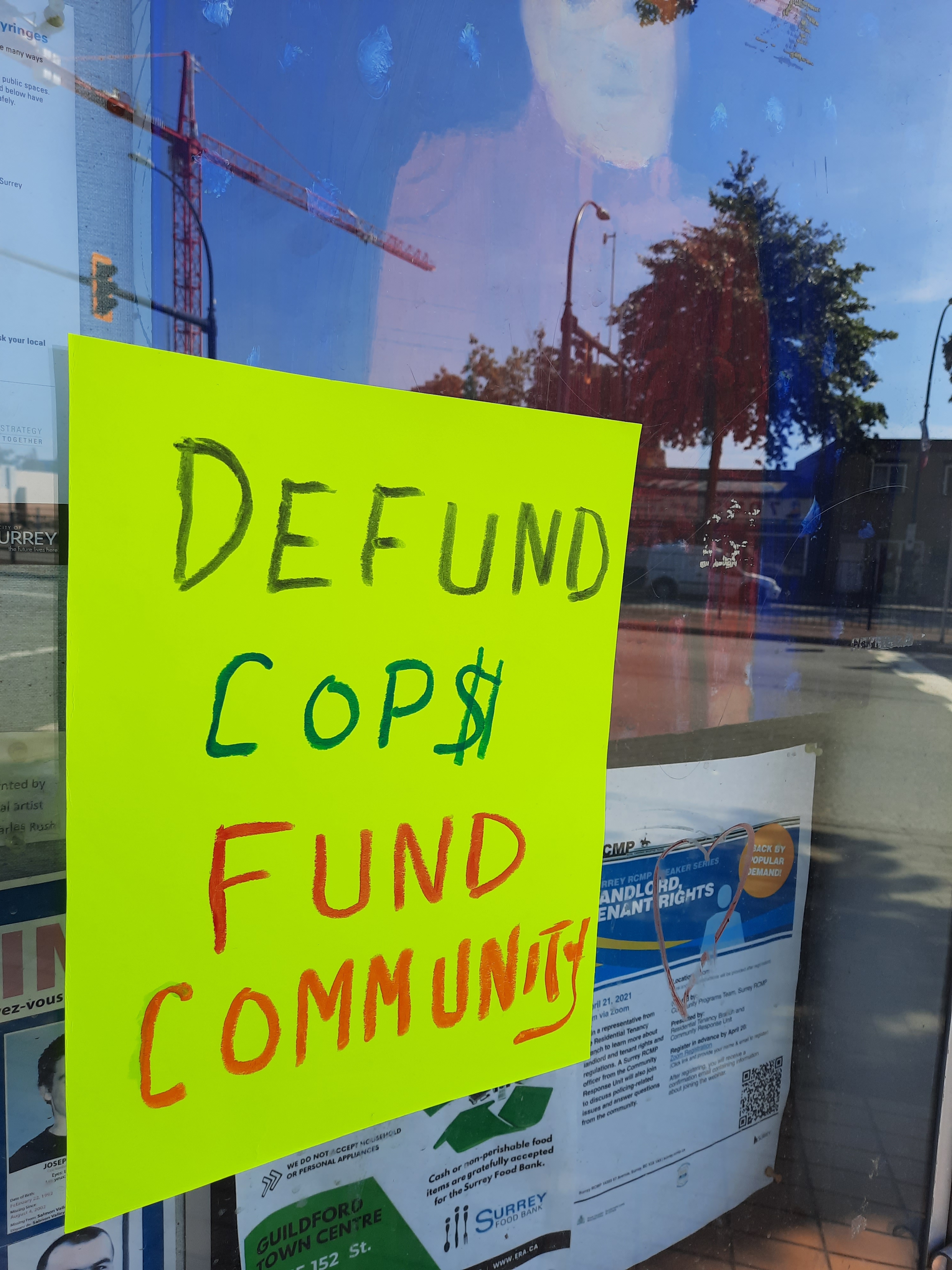 The municipal election period in British Columbia this year has seen a bright light shone on the domination of police in city politics, particularly in Vancouver. The decision of the Vancouver police association to endorse the rightwing ABC party led by mayoral candidate Ken Sim has been widely condemned as a dangerous interference of police in politics, raising the prospect of a city run by cops. Attention has also been given to police officers running as candidates in the election.

While Vancouver has gotten most of the attention, these issues are also at the centre of municipal campaigns in Surrey, where policing always dominates city hall. The city has been torn over the transition from the RCMP to the Surrey Police Service, with various slates taking one side or the other—but none courageous enough to put defunding of either or both on the table.

Interference, or even prospects of interference, by police in elections is obviously a serious issue. For some, police endorsements of candidates and police officer candidates suggest a crossing of lines suggestive of an overt police state. At the very least, it raises serious questions about police wielding influence over city budgets, when for most cities in Canada police make up the largest part of municipal expenditures. There is the added concern that this represents a political backlash by police in a context of community calls to defund police.

So, what are the police connections in each slate, and particularly who are the cop candidates in Surrey, where election promises on policing sound more like threats?

The Incumbents: Doug McCallum and the Safe Surrey Coalition

Mayor Doug McCallum and his Safe Surrey Coalition ran last election on a law-and-order platform and a promise to replace the RCMP with a new Surrey Police Service. Upon election, McCallum and company set about delivering on this promise in a manner that was simultaneously offensively aggressive and outrageously bumbling. The transition is now under way at a cost of at least $63 million (and rising) simply to cover the shift to a new force, and Surrey residents are currently subjected to not one but two municipal police forces.

McCallum will be going from the ballot box to the witness box as he faces a trial starting on October 31 related to his bumbling feud with the astroturf group Keep the RCMP that wants to do what its name says. McCallum had deliciously complained to the RCMP that a member of the pro-RCMP group had driven her car over his foot while petitioning outside a grocery store. Three months later, it was McCallum who was charged with public mischief related to his complaint.

Safe Surrey Coalition is running one cop for council, John Gibeau. Gibeau worked as a police officer for the Burnaby RCMP and the New Westminster Municipal Police Department.

McCallum’s main nemesis in the last council was Brenda Locke. Locke is running for mayor with her Surrey Connect slate. Surrey Connect has operated its campaign something in the style of public relations for the RCMP association in Surrey. They have worked closely with the astroturf Keep the RCMP in Surrey (KTRIS), appearing at events together and sharing social media posts positively. Surrey Connect has a main campaign promise to end the transition and keep the RCMP. At times, it seems like this is their only concern.

The relationship seems so cozy on the surface that Stephen Carter, the campaign manager for Surrey Forward mayoral candidate Jinny Sims, has accused Surrey Connect of breaking third-party election laws by actively supporting Locke for mayor. Carter alleged that the astroturfers are illegally colluding with Locke’s party: “In a campaign where the current Mayor is facing significant criminal charges, a second candidate has been convicted of criminal activity in the past, it is amazing that a third candidate is willing to take these unlawful liberties with a third-party advertiser.”

For his part, Paul Daynes of KTRIS is on record as saying: “We organize flag-waving and events, and so on, and many of our volunteers are members of, or are supporters of, Surrey Connect and vice versa. We’re so intermingled, it would be difficult to say where one person’s allegiance starts and another ends.” They have, of course, provided their endorsement.

Surrey Connect claims one police member, Rob Stutt. Stutt identifies as “a career investigator with 43+ years in policing and the insurance industry.”

Surrey First, led by mayoral candidate Gordie Hogg, has threatened to hire 300 more police officers upon election. This despite the fact the Surrey is already heavily policed, and policing takes over 20 percent of the city budget. While not running a police officer, council candidate and incumbent councillor Linda Annis serves as Executive Director of Metro Vancouver Crime Stoppers, a layered policing outfit that works in conjunction with police. Annis is also the city council liaison for SAFE (Surrey Anti-Gang Family Empowerment Program), another layered policing operation waging the drug/gang war in Surrey.

Policing has long dominated municipal politics in Surrey, to the detriment of the community. Even those parties that are not running police officers as candidates or working alongside astroturf police outfits are promising big resource gains for police. United Surrey, led by Liberal MP Sukh Dhaliwal, has promised a new regional police training facility to be based in Surrey. This would mean an enormous additional expenditure of resources and could well take resources from proper public post-secondary institutions.

To be clear, there is no progressive alternative in Surrey. The situation is so bad that the would-be progressive party, Surrey Forward, which is NDP-aligned and led by NDP MLA Jinny Sims, is calling for increased criminalization for low level activities and threatening to put a cop in every school in Surrey.

Surrey is in many ways a centerpiece of policing development and experimentation. This is especially so in terms of layered policing, which extends policing throughout the community and everyday life in schools, communities, youth groups, sports teams, health care, etc. This Surrey Model of policing is being taken to other jurisdictions in British Columbia.

The involvement of police as candidates in local elections and the close relationships of political parties with police and pro-police groups is something that should be cause for great concern. It is something that bears serious attention, this election cycle and beyond.