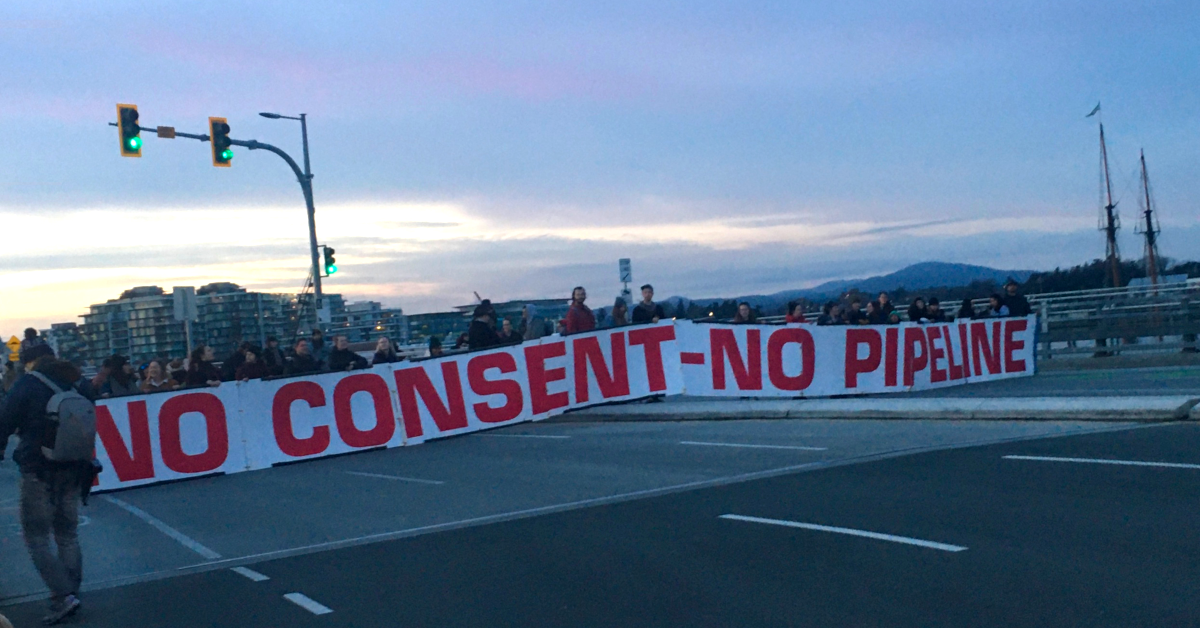 Jennifer Wickham is a Cas Yikh (Grizzly Bear House) member in the Gidimt’en Clan of the Wet’suwet’en people, and the media co-ordinator for the Gidimt’en Checkpoint. Scott Neigh interviews her about her people’s ongoing fight against the Coastal Gas Link (CGL) pipeline.

Wet’suwet’en territory encompasses 22,000 sq km in the north of what is colonially known as British Columbia. Like most Indigenous nations in BC, the Wet’suwet’en have never signed a treaty with the Crown, and even Canada’s colonial legal system has, through the 1997 Delgamuuk-Gisday’wa decision, recognized that Wet’suwet’en (and neighbouring Gitxsan) territory are unceded and that the rights to that territory continue to be held by the traditional governance systems of those nations. Despite this, however, Wickham said that from pretty much the day after that decision was issued, “It’s been a very active campaign of all levels of government and industry to continue to steal our resources and trespass on our territory, even though they knew and still know full well that the Wet’suwet’en and Gitxsan people have never given up their rights and title.”

The CGL pipeline would carry fracked gas from a point near the Alberta/BC border to a massive proposed LNG terminal in Kitimat on the coast, crossing Wet’suwet’en territory along the way. Since it was first proposed, the traditional governance system of the Wet’suwet’en has repeatedly made clear that they oppose any and all pipelines crossing their territory. Band councils are not part of traditional governance and are constituted by the Canadian state, do not hold the rights to the land, and have only municipality-like authority over the tiny portion of territory designated as reserves. While some band councils have signed impact benefit agreements with Coastal Gas Link, Wickham says that the number of Wet’suwet’en people who support the pipeline is actually “very few.”

She continued, “The reserve system was put in place to remove our people from our territory so that we wouldn’t be able to defend it or protect it from extraction and industry.” While emphasizing that they would not speak against Wet’suwet’en who support the pipeline, she said, “It’s a very underhanded, tricky game that the industry and government are playing in trying to pit elected band council systems against our hereditary system… Obviously, they will try and get access [to our resources] any way they can. And the divide-and-conquer tactic is alive and well, just as it has been since the beginning of colonization.”

For more than ten years, a number of Wet’suwet’en house groups and clans have been re-occupying the different parts of the territory for which they are responsible. One of the first of these was the Unist’ot’en, who set up a camp in the path of multiple proposed pipelines, including CGL. In 2018, an injunction was issued against the Unist’ot’en, and it was at that point that the Gidimt’en decided to show support by setting up a checkpoint on the road leading to the Unist’ot’en Camp.

Over the subsequent years of struggle, there have been many important actions – including the massive, cross-Canada uprising of the #ShutDownCanada movement in early 2020 – as well as police responses and other changes on the ground but the overarching dynamics have been much the same. On the one side have been Wet’suwet’en land defenders occupying their own territories, in accordance with their own laws, with the support of allies. On the other have been the company and the Canadian state, using every mechanism at their disposal, including militarized police and outright violence, to force the pipeline through, in the name of profit.

According to Wickham, both in the context of the periodic massive raids and in their relentless everyday harassment of Wet’suwet’en people, the RCMP in particular have played the same colonial role that the force has played since its founding. “The RCMP are doing exactly what they were designed to do. When colonization first started, the RCMP was created in order to deal with the ‘Indian problem.'” She said, “There’s probably a lot of folks within mainstream society that see the police as, like, keeping the peace or keeping people safe. They have never interacted with Indigenous people that way… Their job has always been the same. It’s always been to contain and suppress and oppress the Indigenous people so that the Crown – so-called Canada, the corporation of Canada – can have access to all of the resources that it wants.”

When the COVID-19 pandemic began, it interfered with resistance, but the company and the government made sure that work on the pipeline continued full steam ahead. But resistance has, of course, continued as well. In late 2021, for instance, people associated with the Gidimt’en Checkpoint occupied a site that the company was planning to use in the process of drilling under the Wedzin Kwa, the main salmon-spawning river in Wet’suwet’en territory. The occupation lasted for two months, before being ended by a brutal RCMP raid.

According to Wickham, “Since then, it has been just increased RCMP harassment and intimidation.” In response, earlier this year, the Gidimt’en clan and a number of its members launched a civil lawsuit against the RCMP, CGL, and CGL’s security company. That lawsuit is still before the courts. Wickham said that CGL and their security company have responded by denying everything, while the RCMP and the federal Department of Justice have not responded to the suit at all. Given that, the Gidimt’en intend to apply for a summary judgment against the RCMP.

As for the pipeline itself, construction continues. Drilling underneath Wedzin Kwa seems to have begun, and Wickham said that at the moment the magnitude of the RCMP presence in Wet’suwet’en territory and the intensity of the ongoing repression “is really limiting any actions that we’re able to take.” But in recent months, they have been making renewed calls for solidarity actions. In particular, the Wet’suwet’en hereditary chiefs recently “did a cross-country, nation-to-nation tour where we went and met with a lot of our allies, all across so-called Canada.”

That and other recent calls to action are, Wickham said, “starting to maybe remobilize folks that have always been supportive of what we’re doing.” That includes both allied Indigenous nations and also “the broader community of citizens of so-called Canada that are starting to realize that we’re doing what’s right and we’re doing it for everybody.” Because of the climate crisis, she said, “we’re seeing all across North America the floods, and the fires, and the droughts, and the hurricanes, and, and, and, and, and.” Resistance by Indigenous nations, including the Wet’suwet’en, to fossil fuel infrastructure has been the leading edge of the fight against the climate crisis.

Wickham concluded, “It’s really important for listeners to know that just because they’ve started to drill underneath Wedzin Kwa, that it’s not over. The Wet’suwet’en will always do whatever it is that they need to do to protect their territory… So get involved.”

Next week’s episode of Talking Radical Radio will feature two people active in grassroots solidarity with the Wet’suwet’en in other parts of the country, talking about what the actions they have been taking and exploring what solidarity means.