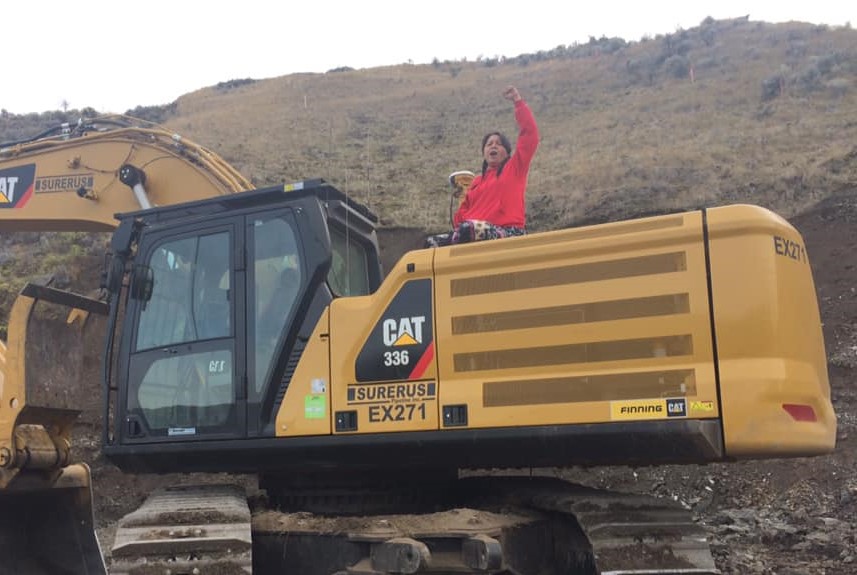 At 46-years-old, April Thomas isn't worried about facing jail time simply for defending her right to hold ceremony on her unceded ancestral lands.

"I could probably get all the reading done that I wanted to get done," said the Secwépemc matriarch and grandmother who – along with three others – was convicted on December 7, 2022, of criminal contempt for breaching a Trans Mountain Pipeline Expansion (TMX) injunction in Kamloops' Supreme Court, in British Columbia. Four others – including non-Indigenous allies – faced trial from December 12 to 16.

"A lot of good things could happen … even if I am incarcerated. I just think that whatever happens, I got put on this path for a reason."

If anything, she told the Media Co-op from her residence in Kamloops, this will help spread more awareness among Indigenous peoples and settlers of how Canada's government, via the courts, uses injunctions at the behest of corporations like TMX to suppress resistance.

"People are starting to understand the effect that these [Mutual Benefit Agreements signed between certain reserve leaders and TMX] and the selling of our land and resources – the impacts they have, not just on me, but on our land and our Title," she said.

Thomas and the others were first arrested two years ago, on October 15 and 17, 2020, in the middle of water and hair-cutting ceremonies, respectively, at Sqeq’petsin, near the Thompson River and within the area covered by TMX's injunction.

A December 5 press release from grassroots group "We, the Secwepemc: Virtual Unity Camp to stop Transmountain Pipeline" states that on Oct. 15, RCMP officers attended the ceremony "despite having no clear jurisdiction in Secwepemc Nation … and immediately began threatening arrest without making any attendees aware of the injunction."

A similar scene is described on October 17, when a "team of all male"  RCMP officers arrested the women performing the hair-cutting ceremony. 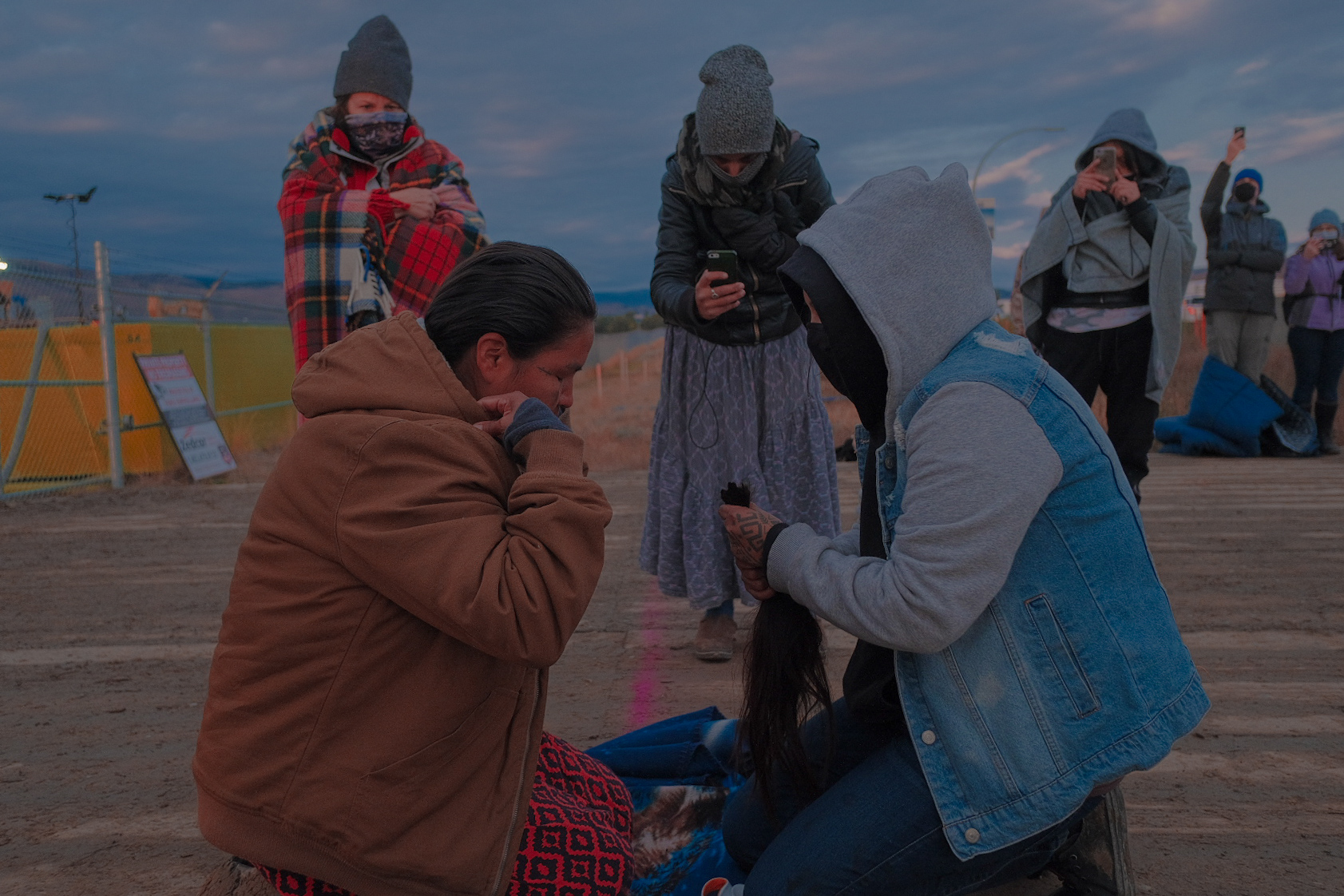 Secwépemc Matriarch Miranda Dick and her sister in a hair cutting ceremony at the TMX drill site, in October 2020. Photo: We, the Secwepemc (Facebook)

A day after Thomas' conviction, Kamloops Weekly reported that Justice Shelly Fitzpatrick found the four had knowledge of the injunction ahead of time and had gone with the intention of violating it.

Citing evidence given by the Crown, the report says Fitzpatrick found one of the defendants had intentionally zap-strapped herself to a bulldozer during working hours to "disrupt the activities as much as possible."

The report goes on to say Thomas had also been taken into custody after sitting on bulldozers across the road.

Thomas, who was the designated court support person for the rest of the defendants, never had the chance to voice her closing arguments – she was absent when the trial concluded due to the death of her sister a few days prior. On the first day of the trial, December 5, Thomas was still cleaning her sister's house and burning her belongings as part of a Secwépemc tradition.

By December 7, the day of their conviction, a bench warrant was issued for Thomas despite the rest of her co-accused – all of whom were self-representing – asking for a few days' adjournment time.

"To me, the whole situation was odd (because) I couldn't be there because of my mental, physical and spiritual state at that time – we had just buried my sister," she says.

"And the judge just had zero compassion for what I was going through and…proceeded without me and, in the end, found me guilty even though I wasn't there to represent myself. ... But at that point, I was just so distraught that I didn't even care if they did come and arrest me and put me in jail."

The trial, which had begun back in October, had been adjourned after Thomas collapsed during court due to what doctors later diagnosed as a non-cardiac arrest.

Thomas and her co-accused – Secwépemc Hereditary Chief Saw-ses, Billie Pierre of the Nlaka’pamux Nation and Romilly Cavanaugh, a former Trans Mountain environmental engineer – are set to be sentenced in February 2023.

The Crown is asking for three to six months in jail for Pierre and two to four for Thomas. Chief Saw-ses could be sentenced to one to three months.

Thomas says the intention was never to protest anything but to hold their ceremonies within their unceded territory.

She says no one was working when they got there, though she admits that unbeknownst to her, some of the others began zap-strapping themselves to work equipment.

She says when she decided to sit on the bulldozer, it was after the others had already begun the unexpected protest and was done to protect her friend, because the operator was starting the bulldozer while one of them was strapped to it.

Nevertheless, she says, everything they were doing was within their legal rights as Indigenous Title Holders of the territory.

"We have Aboriginal rights and even under Canadian laws, we also have a right to protest," she said.

According to the Kamloops Weekly article, Fitzpatrick said the fact the lands are unceded are not a defense against criminal contempt charges.

But that's not cutting it for Thomas, who says the government lacks "proper authority and jurisdiction to … impose an injunction on our territory without consulting and getting the collective consent of the proper and rightful Title Holders."

"It is us who write our own laws, and us who make laws on our own territory, and we're the ones who determine it," she said.

"Our laws supersede (Canada's) laws, and that's been upheld right up to the United Nations level. But it's Canada who is not upholding it." 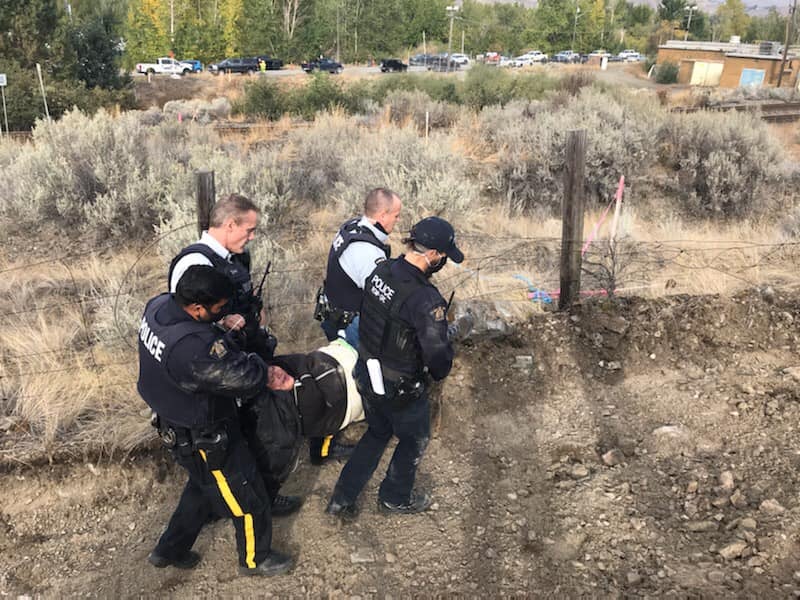 Billie Pierre being arrested on October 15, 2020. Photo: We, the Secwepemc (Facebook)

According to First Peoples Law, a law firm dedicated to advancing Indigenous Peoples rights, "courts are increasingly reluctant to grant injunctions to Indigenous groups where the result would be to halt or delay a proposed project."

"The result is to transform the injunction from a tool used by Indigenous people to protect their lands and rights to one which suppresses Indigenous opposition and denies the exercise of Indigenous law."

Since the injunction was granted in 2018, until February 2022, there were more than 248 people arrested for contempt while protesting the TMX, according to advocacy group Protect the Planet StopTMX. Nine-six people have been handed varying jail sentences, including three on house arrest. There has been one acquittal.

In a very similar case to Thomas', in December 2020 Fitzpatrick found Indigenous Elder Jim Leyden guilty of breaching the injunction. It was Leyden's second conviction. And in May of this year, Fitzpatrick sentenced Tsleil-Waututh Nation member and Burrard Inlet protector William George to 28 days in jail for violating an injunction from 2021, the Toronto Star reported.

Freelance journalist and activist Kris Hermes has previously provided legal support to Indigenous land defenders fighting TMX and helped compile the data cited by Protect the Planet. In a piece published in Briarpatch magazine in 2021, Hermes wrote that Leyden's conviction and the "most recent verdicts from Fitzpatrick set a chilling precedent on how the Crown can handle these contempt cases, without even the presence of police or an order to disperse."

Thomas, who was attending university to prepare for law school, says she feels the government is targeting her to suppress both her activism and education.

"Why would I get arrested and jeopardize all that?" she said. "I know that I was targeted, that their intent was to criminalize me so I can't go to law school."

In his piece, Hermes bluntly noted that BC's government – "in the robes of Crown Counsel – is working at the behest of TMX" by indiscriminately enforcing the injunction.

Liberal Prime Minister Justin Trudeau bought the pipeline in 2018 for $4.5 billion, after its original owner (Kinder Morgan Inc.) withdrew funding due to the mounting resistance in spite of the injunction orders.

Trudeau has said the government is open to Indigenous participation/ownership of the pipeline once completed. Several for-profit and nonprofit Indigenous-led groups have expressed interest, some even despite the fact that construction costs have ballooned upwards of 70 per cent, to $21.4 billion, the CBC reported in March.

Nesika Services, an Indigenous non-profit organization seeking ownership stake in the pipeline, said 14 Indigenous communities who would be affected in Alberta and BC have already signed on.

The government has identified 129 communities that will be affected, and Nesika chair and founding director, Chief Tony Alexis of the Alexis Nakota Sioux Nation in Alberta, said the organization is in the process of contacting them all.

But Thomas says the NDAs signed by a few band leaders in exchange of "contracts" and "fringe benefits," have sowed division between them and the larger off-reserve grassroots opposition to it.

"They're taking all this money for governance and claiming that they're doing it under traditional authority. And the way they're doing that is paying off a lot of people who claim to be spiritual and claim to be hereditary in nature, and they're further dividing our people and misrepresenting us," she said.

Thomas is prepared to do her time, knowing the fight against the TMX will continue regardless of where she is, and that she will rejoin it as soon as she's out.

She says despite the struggles, she is counting on the mounting and growing support for the resistance, even from settlers.

"They just want to help because they're women, they're mothers, people of colour – they're all kinds of people who are being systematically oppressed by these patriarchal systems," she said. 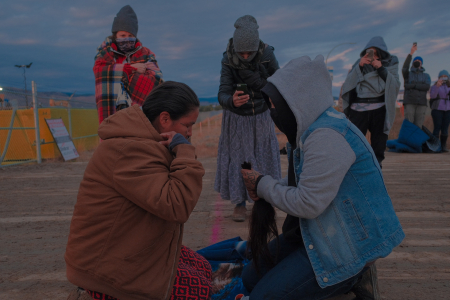 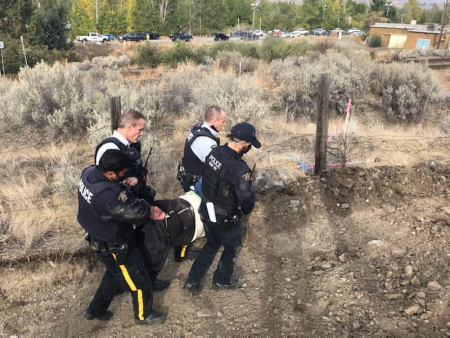