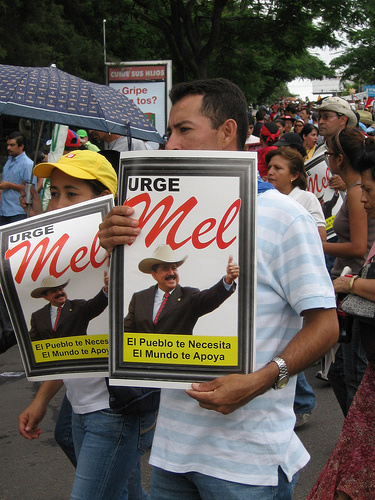 1. It was a military coup carried out on behalf of corporate and transnational elites. "Restoring Democracy" though a military coup is akin to bombing your way to peace.

2. Coup participants were trained by the CIA and at the School of the Americas. Reactionary, anti-democratic US training grounds such as these are responsible for mass murder throughout the Americas.

3. President Mel Zelaya is a centrist, and his movements towards the "left," such as joining the ALBA trade block, are a result of massive popular pressure for change.

4. The constitutional referendum was not focussed on extending Zelaya's term limit. The referendum on the constitution marked the beginning of a popular process of participative democracy, which is extremely threatening to local and transnational elites.

5. Transnational corporations support the coup. Goldcorp has been bussing employees to pro-coup marches, other Canadian companies have stayed silent and complicit in the coup.

Photo of demonstrators in Tegucigalpa by Sandra Cuffe. This write up was originally posted at The Dominion