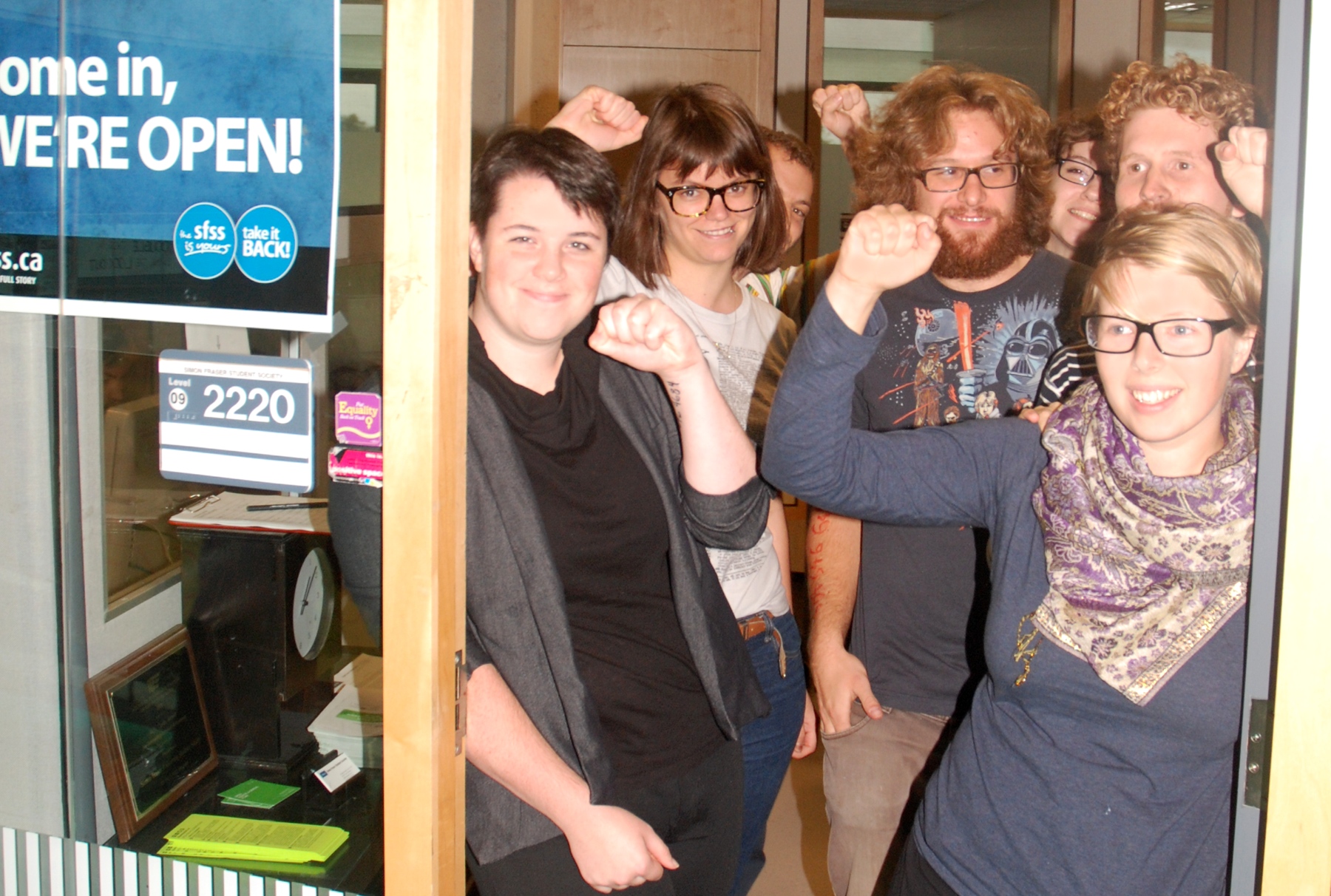 SIMON FRASER UNIVERSITY - A student group calling itself UR SFSS has taken over the offices of the SFU Student Society to demand an end to the 79 day lockout of society staff.

About a dozen members of the United Responsibe Students For Staff and Space have vowed to occupy the offices for an hour for every week the SFSS has locked out its own staff.

From the UR SFSS press release:

[Burnaby, BC] - At approximately 1pm, a group of eight students entered the office of the Simon Fraser Student Society (SFSS) Board of Directors and launched a peaceful occupation. Outside the office, the hallway is filled with student and campus supporters. Students organized the non-violent act of civil disobedience independently to show their dissent against the Board’s decision to lock-out its unionized workers, members of CUPE 3338-5.

Twelve weeks ago, after having put forth an unacceptable offer that would have introduced a two-tier wage structure, rolled back hard-fought benefits, and virtually eliminated job security, the Board resorted to one of the most extreme anti-worker tactics -- a lock-out. The students inside have vowed to occupy the office for twelve hours, one hour for each week that SFSS services have been cut back due to the lock-out.

Women, queer, and trans campus community members are among the most detrimentally affected by the lock-out. The Women’s Centre and Out On Campus, both necessary safe-spaces at SFU for marginalized students, have been closed for the past three months due to the lock-out. “I am supporting this student occupation because my fellow queer, trans and women students need those services and spaces. Services like those are exactly why we need a student society,” said undergraduate student Neem Maness.

The volunteer Board members voted to double their own honoraria for the lock-out’s duration, supposedly covering their overtime incurred from the workers being barred from doing their jobs. That brings the Executive Board members' honoraria up to $3500 per month.

“It means that each of the directors have a high personal financial stake in preventing these services from resuming,” stated Chelsea MacKay, one of the student participants in the occupation. “We elected the Board to run the Student Society, but now they've turned around to dismantle it. It’s time the Board stops avoiding its responsibilities and returns to bargaining”.

Students participating in the action see the lock-out as an ideological attempt by the employer to break a union under the rhetoric of cost-cutting. The Board refuses to budge on wage cuts, including those that would slash student workers’ current living wage down to a poverty-level wage.

“The Board’s primary justification for the lockout is that they don’t have the money to pay the workers their due wages. Meanwhile they have just spent tens of thousands of dollars on yet another pub renovation and gifted themselves a shameful raise,” said student participant Maria Persdotter. “All these locked out workers provide vital services that only student societies can. It takes incredible gall and malice to argue that new booths and cheaper beer are somehow more important than providing real services to students, and paying these workers fair, living wages.”

Students occupying the SFSS Board office have promised future actions if the Board continues to shirk its responsibility to its members through its mismanagement, and calls on the Board to immediately end the lock-out and return to the bargaining table in good faith.

For background on the lock-out, see: sfulockout.blogspot.com