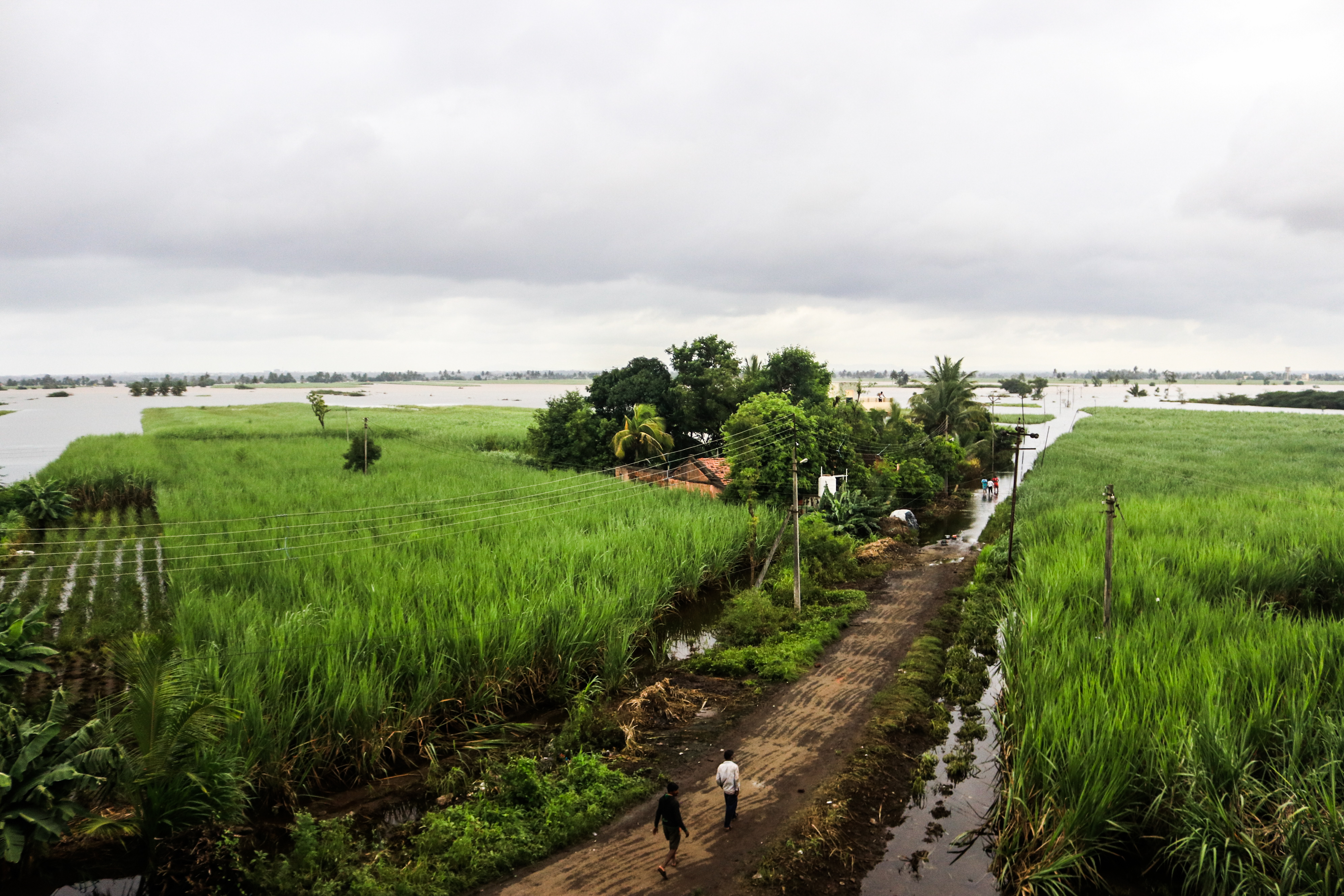 Vanita Chudappa was never scared of surveying. It’s something she has been doing for more than a decade now as part of her every day work. The conditions now are different. “Every day while surveying 40 households, I have to take my 2.5-year old daughter, Shreya. She doesn’t stay without me,” she says.

The survey she’s talking about is a part of India’s model micro plan for containment of the spread of Covid-19, issued by the Ministry of Health and Family Welfare.

At the frontline of this are Anganwadi workers (AWW or public kindergarten teachers), Accredited Social Health Activist (ASHA) workers, who are the foot-soldiers of healthcare in rural India, and Auxiliary Nurse Midwife (ANM). Their roles include looking for suspected cases, identifying their contacts, monitoring daily, and ensuring proper home quarantine. They are also tasked with creating community awareness regarding the pandemic.

Every day for 50 days now, 39-year-old Vanita, a public kindergarten teacher, has been surveying 102 households. Her only safety aid is a cotton mask. This has worried her family members who even insist she abandon the work. While she maintains at least a one metre distance while talking to the community members, her fears reveal that none of the measures can ease her troubles anytime soon.

In the late 1980s and the early 90s, her community was forcibly displaced because of the Chandoli National park project in the Maharashtra state of Western India. With no farming land received as compensation, more than 80 percent of the community members migrated for work to Mumbai, the financial capital of India, which has now become a Covid-19 hotspot.

Before the first phase of a 21-day lockdown was declared by the Indian Government on March 25th, the Prime Minister of India, Narendra Modi, had announced Janata Curfew, a 14-hour voluntary public curfew to curb the movement of 1.3 billion people on March 22nd.

Vanita’s hamlet of Sonarli in the Kolhapur district of Western Maharashtra (central-west India) was particularly at risk because the people had started moving back to their villages, merely a few days before the curfew. “Around 200 people had to be quarantined in the first phase of the lockdown,” she tells me on a call. Smaller houses, denser families, and less space makes it difficult to self-quarantine. “Neither do the people co-operate. They don’t talk to us properly. Even the police are tired now,” she frets.

Before the lockdown, two marriages took place in the community, and even the “guests are now stuck here,” she says. The hamlet has an all-time high presence of people now as 50 more people will arrive in a day or two, after a partial relaxation in the lockdown.

Several people ask her for medicines for the common cold, but she can’t help as they are out of stock now. After the survey, she updates her senior officials in the Community Health Clinics (CHCs) about the everyday report, which is then sent to the Primary Health Centres (PHCs).

Vanita anxiously awaits the new lot of masks from her seniors. “It’s stuck in a village because of the lockdown,” she explains. To date, she hasn’t received hand gloves. “It was only a few days back (last week of April), that we got hand sanitizers,” she says.

So far, she has spent more than 200 hours surveying and doesn’t know when will it end. How much will she be compensated for this? The equivalent of a mere $19 Canadian (CAD) from the village Panchayat (the governing body). Since 2006, she’s been working as an AWW, and now her monthly honorarium is Rs 8500 (equivalent to about $160 CAD).

With a much stricter lockdown which has now been extended to the third phase, making it a total of eight weeks, several people have lost their livelihoods. “Tired” of her everyday visits, a lot of people now yell at her. “I just ignore them. This is for the country and I am doing my duty.”

One amongst this workforce is Rupali Koli from the Nigave Dumala village of Maharashtra. 36-year-old Rupali, an AWW, had never anticipated the kind of troubles she would face post the Covid-19 training.

Only after surveying 102 households 30 times did she get a cotton mask. “The Government should take care of the frontline workers. We weren’t even given hand gloves,” she says. Collectively, the 7 AWW and 6 ASHAs brought in hand gloves by spending their own money.

Her job has now taken a turn of no less than an investigator. In April, while surveying, a person who had returned from a tier 2 risk city was hiding his travel information and didn’t abide by the quarantine rules. She spoke to the family politely and explained to them the importance of quarantine. However, the family cussed her, and later, only with the police help, they quarantined the patient. “We are fighting for others, but people don’t understand how deadly this virus is,” she says.

It’s only through the neighbours that they get any information about the people arriving from different cities and states. What makes this process tedious is rampant misinformation and fake news. Whenever she asks the migrants to quarantine, they talk to her rudely and even ask for the source of information. She now knows that these are the initial signs of a fight, and in one such case, they had to seek police help. Patriarchy makes it worse.

An ASHA worker from her village, Deepali Rawal, age 36, says, “People don’t treat us with respect and make fun of us, especially the men.” She also ensures that while risking their lives surveying, none of the other health issues are neglected. ASHAs receive an average monthly honorarium of just Rs 2000-3000 ($38-57 CAD) in Maharashtra, far less than what they deserve.

“Earlier, we had asked people to quarantine themselves for 14 days, but now it’s 28 days,” Rupali says. However, the bigger challenge is to ensure that people don’t leave their homes. “It’s difficult. We educate their family members then,” she explains. In the last week, three more people from her ward were quarantined. She seeks regular updates from them and makes certain that they finish off the quarantine time. “We ensure that all the vaccinations [not Covid-19 related] are done on time. There are cases of pregnancy, and we make sure that the women receive proper medical treatment and care,” she adds.

In her visits, people always ask her if she has masks or hand sanitizers to offer. Helplessly she says, “We haven’t received it yet.” She complaints that people don’t share information with the frontline health workers. To help the ASHAs and AWWs with the surveying, even the primary school teachers from public schools are now lending a hand.

Before entering her house, she takes a bath and ensures all her clothes and masks are disinfected with Dettol. “Everyone is scared in the family, but it’s our work,” she says.

As a kindergarten teacher, she gets a monthly pay equivalent to $150 CAD. For February, she received 60 percent of it and awaits the honorarium for March and April. For her, an impending disaster is running out of food supply. Although the Government has assured an allotment of 5 kilograms rice per person, it’s not going to solve the problem, let alone alleviate it. Her husband, who works in an industry where work has not been happening since the first phase of lockdown, which was on 25th March. The family won’t be able to withstand the third phase which is from May 4th to 18th. “The Government doesn’t pay us on time, and neither do they pay attention to our safety,” she says fearfully.

In the last week of March, a doctor from rural Kolhapur who’s handling Covid patients said on the condition of anonymity that his team had only received a single mask and no Personal Protective Equipment (PPE) kit. They spent their own money and bought extra masks. “When the outbreak happened in China, the Government [of India] knew it. They should have prepared and procured [medical supplies]. Had the international passengers been quarantined then, it wouldn’t have spread and we wouldn’t even have had to lockdown the country,” he said on the call.

For Babutai Narde, the four hours in the first half of her day remain the most disconcerting. Her challenges stem from a year-old history of the August 2019 floods that ravaged her village, Arjunwad, in Maharashtra.

In a mere nine months, when the villagers were just coming out of the losses, they had to deal with the fate of an unplanned lockdown and the Corona pandemic.

52-year-old Babutai, an AWW for two decades, surveys 75 houses every day and says, “A lot of people are scared of quarantine. So, we try to tell them that we are here to save you. However, it hasn’t turned out to be effective as more and more people hide their travel history details.”

The village with a population of 5641, as per a 2011 census, has roughly 1000 households and every health worker is covering 75 houses every day. With stricter police enforcement, the agricultural labourers in the village couldn’t go to the farm for a month.

Shubhangi Kamble, 30, an ASHA worker from the same village who doubles up as an agricultural labourer, said, “The grocery shop in the village has now stopped giving us grains on credit. Everyone in my house asks, why do you need to do this survey? I can’t even sleep properly now.” Owing to her poor health, she had to take a break from farming work in February, and because of a stricter lockdown, she lost another month’s work.

Babutai describes the crisis in words that resonate with several frontline workers, “We fear a lot and sometimes even feel like we shouldn’t do it, but a crisis has come on the nation, and we won’t stop.”