Emission reductions of this scale, mandated by governments, are very rare
by
David Gray-Donald
This post has not been approved by Media Co-op editors! 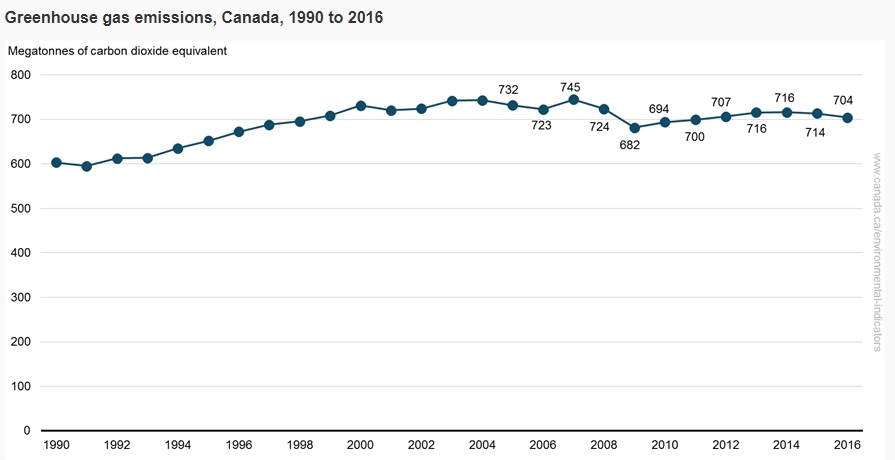 Rachel Notley's NDP government will reduce overall greenhouse gas (GHG) emissions in Alberta by approximately 3% when their legislation cutting oil production by 325,000 barrels per day comes into effect in January 2019, if all else remains constant. Amazingly, this reduction, from an 8.7% cut in oil production, comes from one single government action.
Behind the decision lies the fact that – in addition to Alberta bitumen being a product that sells at a natural discount – there has been supposedly more production of the product than can be transported by the existing pipeline and rail infrastructure. It is one of the clearest examples in Canada that stopping major new fossil fuel infrastructure from being built effectively reduces GHG emissions.
A 3% reduction in overall emissions is no small feat. Under Stephen Harper's Conservatives, Canada's emissions reduced by 8% from 2007 to 2009, an extraordinary time period. That emissions reduction was due to a combination of the biggest economic crash in a generation (2007-2008), an extraordinary dive in world oil prices (2008), and a 20% reduction in emissions from coal by shutting coal-fired power plants. The coal phaseout was pushed for by communities and legislated by government, while the other factors were market forces.
Coal use has continued declining since 2009 as coal-fired power plants close, but overall emissions in Canada have steadily crept back up, in large part due to the rapid expansion of the tar sands. By 2015, the end of Harper's reign, Canada's emissions had grown so that the reduction from 2007's level was only 4% (as compared to an 8% reduction in 2009).
Media and environmental groups have been largely silent on the environmental implications of Alberta's production cut (not to mention the effect this has on treaty lands). One reason may be the chronically bad reporting in Canada on the implications of the oil industry's actions on the climate. This is one of the biggest government-imposed emissions reduction measures, and the climate implications are not being discussed in the press. Another reason may be that the emissions reductions are supposed to be only temporary, and so not long-lasting. By buying new trains for oil, the Alberta government hopes to quickly bring the legislated reduction in oil production from 325,000 down to 95,000 barrels per day. This would represent closer to a 1% emissions reduction from today.
If oil is not produced in Alberta, the highest-emitting province in Canada by a wide margin, will it be produced elsewhere, along with the associated emissions? This argument is popular with some oil industry spokespeople and closely-affiliated economists, but it relies on the odd economic reasoning that changes in supply of a product have no impact on the consumption of that product. A report published by Stockholm Environment Institute in May 2018 clarifies that "for each barrel of Canadian oil produced, global oil consumption would increase between 0.2 and 0.6 barrels compared to if Canada did not produce the oil." Said another way, there may be some increase in oil production elsewhere, but it will be significantly less than a 1-for-1 trade.
Alberta's plan to increase oil production gradually after the January 2019 cut relies in the short-term on rail capacity (which is relatively expensive), and in the longer term on new pipeline infrastructure. Stopping that capacity has led to the current situation, and to the Alberta government legislating what amounts to a significant emissions reduction.
What comes next?
Emissions reduction calculations
According to 2015 emissions data Canada submitted to UNFCCC, upstream oil was 31.7% of Alberta's emissions. Multiply that by the 8.7% reduction just announced, and it's a 2.76% reduction.
That's likely an under-estimate, since oil production grew by 8.6% from 2015 to 2017, while gas production grew by only 1.5%, and coal plants have closed. So upstream oil is very likely greater than 31.7% of provincial emissions, but precise data on that change is unavailable at the moment.