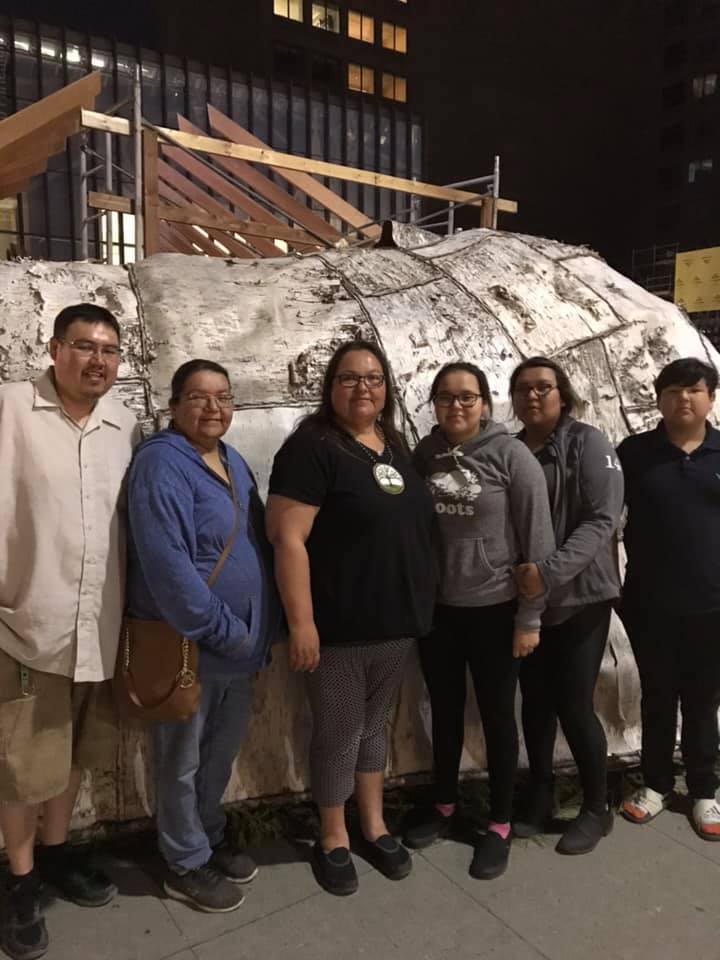 Kwey Kwey,This is a special newsletter edition from AAAMP, the Algonquin Anishinaabeg Aki Media Project, dedicated solely to the ongoing protest across from Parliament Hill in Ottawa:*July 4 update:
An agreement July 2nd allowed Grand Chief Polson to end her hunger strike. Read the press release and media reporting here*
The Algonquin Nation protest at 100 Wellington St continues indefinitely, led by Grand Chief Verna Polson, fighting for equality of inclusion of the Algonquin Nation at the soon-to-open Indigenous Peoples Space across from Parliament Hill. Grand Chief Polson has been sleeping in a birchbark wigwam erected directly outside what was to be the main entrance of the space. The Government of Canada and the three National Indigenous Organizations (NIO) intended to first open the building on June 20, 2019 as a public space for visitors to learn First Nations, Inuit, and Métis history and culture and an engagement space for meetings, but that was stopped.The peaceful protest is ongoing and supporters are welcome to visit; bring a chair if you can. * Overall Invitation to Visit the Protest Camp: *"To all people who stand in solidarity with the Algonquin Anishinabe First Nation, we ask that you visit our Grand Chief Verna Polson who is bravely camped at 100 Wellington St. in Ottawa for 11 days now and counting. The Grand Chief is protesting the disrespect the Government of Canada and the three NIOs are showing to the Algonquin People by not including them as full and equal partners, on whose lands Canada's Parliament Buildings are built. The Algonquin protocols are not being recognized and as titleholders to the land, we must protect it for the children of today and tomorrow. Our rights as a host nation are in jeopardy with this project. We will not be ignored. We ask that you bring a tobacco tie, containing your prayer and good intentions of support. The Grand Chief will graciously receive your tobacco and keep it safely by her side to inspire and motivate her until the Algonquin Nation are full and equal partners. The tobacco gathered at the protest camp will then be feasted and offered into a sacred fire at a ceremonial site within the perimeters of Algonquin territory. Show your support! Show your respect!"** Please also help spread the word of this ongoing protest to family, friends, community members, and through your networks and social media. **

July 2 through 7 - Reporting and statements on agreement reached to end hunger strike
http://mediacoop.ca/story/algonquin-nation-reaches-agreement-government-cana/36878