Anything But Consent: The Liberal Guide to Undermining Indigenous Rights

Anything But Consent: The Liberal Guide to Undermining Indigenous Rights

The Trudeau government championed "consent," but has done everything to carefully undermine it of any meaning
by
Martin Lukacs 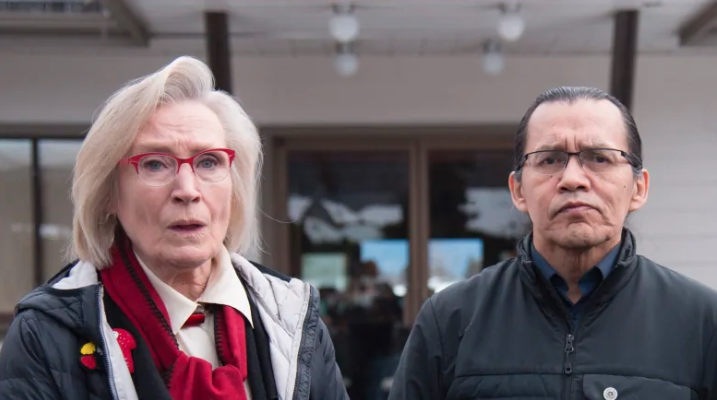 It sounded like a phrase hatched deep in a strategic vault of Liberal spin-doctors: “collaborative consent.”

It was blandly positive, ambiguously open to interpretation, and just technical enough to make us flinch and hope their experts had it covered. Like all Liberal coinages, it was intended to solve a nagging problem. Having endorsed the United Nations Declaration on the Rights of Indigenous Peoples (UNDRIP) to rapturous global praise, the Liberal government now had to contend with one of its central principles: Indigenous peoples’ right to “free, prior and informed consent” over resource developments on their territories. They were deeply averse to implementing it.

On Trudeau’s campaign trail in 2015, it certainly didn’t appear that way. Whether in flip-flops speaking to families barbecuing on the BC coast or in suit-and-tie addressing the Board of Trade in Calgary, he repeated one of his favourite slogans: “Governments may be able to issue permits, but only communities can grant permission.” APTN settled any lingering confusion by asking Trudeau during a town hall, “Would ‘no’ mean ‘no’ under your government?” His response was clear: “Absolutely!”

The country’s two largest resource lobby groups soon jumped on board, suggesting that the Liberal reversal of a Conservative stance was in line with their policies. “A lot of our companies feel they already achieve a lot of what’s required by UNDRIP,” said the manager of Aboriginal Policy for the Canadian Association of Petroleum Producers. “This move really puts us back where we properly belong and also where I think, in practice, we have largely been,” added the president of the Mining Association of Canada.

This was savvy public relations. In truth, free, prior, and informed consent is nothing like the impact-benefit agreements that resource companies currently sign with First Nations, offering them some jobs, a dribble of revenue, and a few university scholarships. It is a simple and straightforward sundering of a century-and-a-half-long colonial arrangement: the hoarding by the federal and provincial governments of all decision-making power over lands and resources, to the engorgement of extractive corporations and exclusion of Indigenous peoples.

So while championing the right of consent made for a great slogan on the campaign trail and a key part of the Reconciliation Industry’s allure, the Liberals have ever since sought to turn it into a feeble simulation of itself. And this is where “collaborative consent” came in: a conceptual ace-up-the-sleeve to resolve the problem of heightened expectations and preserve a deeply unequal power imbalance.

The concept has been spearheaded by a group of Liberal and Liberal-friendly politicians, lawyers, and environmentalists, including former AFN National Chief Phil Fontaine and a former minister in the Northwest Territories. Through Fontaine’s ties to the Liberal party, a report was produced for Minister of Natural Resources Jim Carr in late 2015. Titled “Collaborative Consent,” it suggested that the NWT already offered a nationally-scalable model for “consent-based discussions” (another warm, fuzzy coinage). The report then made its way onto Justin Trudeau’s desk. He loved it, I was told by someone familiar with the lobbying. A few weeks later, in April 2016, while on a high-profile visit to the Manitoba First Nation of Shoal Lake 40, Trudeau invoked the concept in an interview with VICE. “In the NWT they have boards that examine the projects from the very beginning with Indigenous voices,” he said. “The talk of veto or not veto is highlighting the failure of the process as it exists right now. It shouldn’t ever even come to the decision, is it a veto or not a veto. We should be working together from the very beginning.”

When I asked the person familiar with the lobbying how this would in fact work, I didn’t gain any clarity. “It's like reciprocal consent,” they said. “Both parties have veto. Or neither do. It’s about staying at the table.” But when I obtained a slideshow used by the proponents, I found the answer I was looking for. They explicitly mentioned “no veto,” denying the principle of rejecting unwanted resource developments. Indigenous feminists have made a brilliant analogy here: whether it's bodies or territories, if you don't have the actual power to say “no,” then consent is meaningless.

The Trudeau government began to lower expectations about his promise that communities would “grant permission” for resource projects. On his first trip to British Columbia after having approved the Kinder Morgan Trans Mountain pipeline, at the end of 2016, Trudeau was questioned about whether First Nations near Vancouver—the Musqueam, Squamish, and Tsleil-Waututh, all of whom have unceded land rights—could block the project. “No, they don’t have a veto,” Trudeau said. A month later, a senior Liberal official told journalist Peter O’Neil that this expectation had been an “unreasonable” interpretation. “The intent was to say, ‘We’ll consult communities more seriously [than the Harper government],’” the official said. “If we wanted to say community support was mandatory and that communities had a veto, we would have said that.” It was a convenient answer: this version didn’t exactly have the same ring as what Trudeau had said on the campaign trail.

Meanwhile, the more pliable notion of collaborative consent was promoted in op-eds, reports, and small-scale governance initiatives as part of an “on-the-ground-offensive”—trying to build its popularity and bring the UN declaration's “high fluffy goals down to earth,” as was explained to me by the lobbyist. It soon appeared in the interim changes to the new environmental review process proposed by the Ministries of Natural Resources and Environment.

In the fall of 2017, an environmental lawyer met with Marlo Reynolds, the chief-of-staff of Environment Minister Catherine McKenna, to push for this new review process to include the UN Declaration. Its inclusion would be “unworkable,” Reynolds told them. “Name me a project that could get approved,” Reynolds said. In the final legislation for the review process, Bill C-69, free prior and informed consent and UN Declaration are not mentioned anywhere.

The manufactured fear of Indigenous peoples pervades every settler colony whose foundation is the theft of their lands and whose heritage is the disregard of their lives. Even the term “veto” itself—deployed by right wing politicians, the media, and the Liberal government—plays on this fear. Unlike the word “consent,” which means the same thing, it evokes an unyielding Indigenous obstinacy, the foolish stalling of great works, the obstruction of the march of progress.

But most Canadians seem to know something the Liberal government does not: the economy would not be befallen by disaster. Bad projects might be blocked, but good ones would proceed. Endless taking might become caretaking, and the colonial frontier would finally close.

This is excerpted from The Trudeau Formula: Seduction and Betrayal in an Age of Discontent, published in 2019.