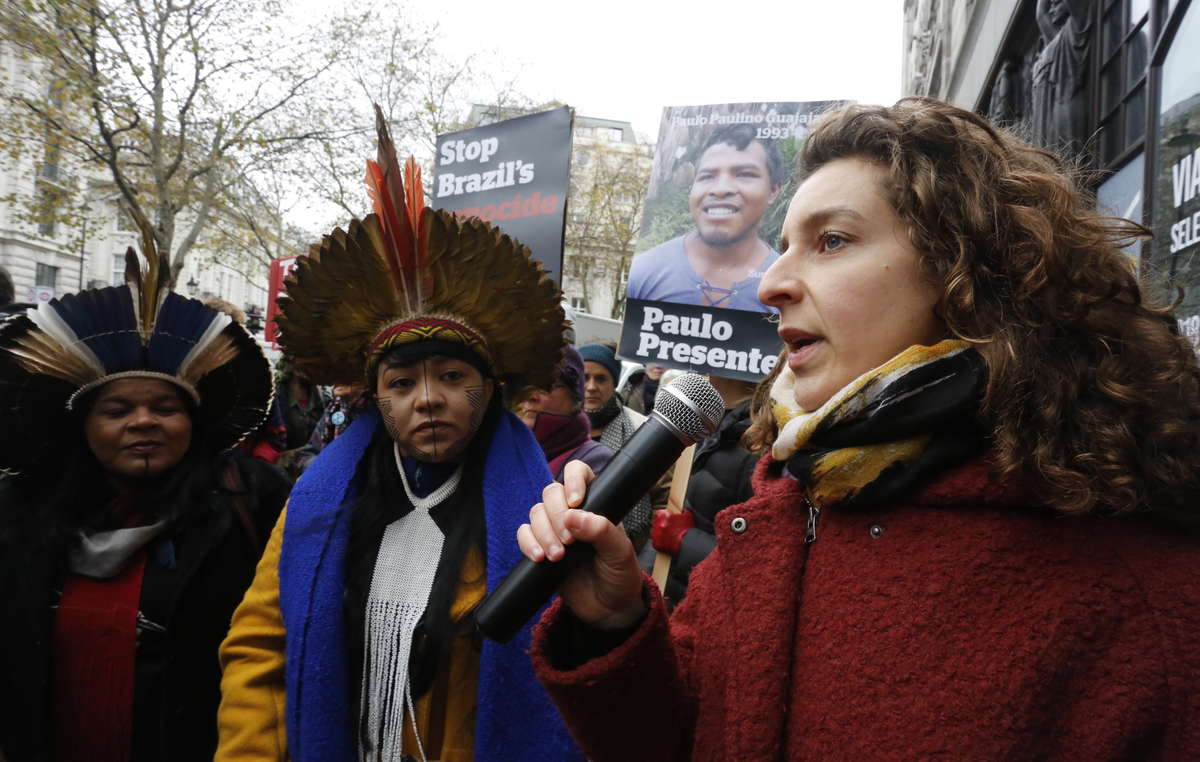 Belo Sun, a Canadian-based mining company with most of its operations in Brazil, has been called out for its activities in the Amazon forest disrupting the environment and trampling the rights of Indigenous peoples.

Belo Sun is proposing a large gold mining project, called Volta Grande, proposed to be installed near the Xingu River. This follows a trend of international business interests pushing into the Amazon for profit.

Canadian and international companies descend on the Amazon

“Canadian businesses have been acting mostly in mining in the Amazon. Sadly, in an arbitrary manner without respect to local population and laws”, states Bruna Balbi Gonçalves, Popular Lawyer and Doctorate candidate in Socio-Environmental Law studies at Pontifical Catholic University of Paraná (PUCPR) in Brazil, speaking to the Media Co-op in Portuguese.

In October 2020, the Articulation of Indigenous Peoples of Brazil (APIB), in conjunction with the American NGO Amazon Watch, published a report, Complicity in Destruction III: How Global Corporations Enable Violations of Indigenous Peoples’ Rights in the Brazilian Amazon. The report reveals the links between American hedge funds and international and national business groups associated with conflicts and human rights violations in Indigenous territories. From 2017 to 2020, financers injected more than $18 billion USD for their large-scale plans. The heads of this hydra are Citigroup, J.P. Morgan Chase, Vanguard, Bank of America, Dimensional Fund Advisors and BlackRock, which by itself invested US $8.2 billion USD.

The document maps conflicts with Indigenous peoples in the Amazonian states of Maranhão, Pará, Mato Grosso, Roraima and Amazonas. The clashes have been caused by mining, agribusiness and energy businesses that led to land invasion, deforestation and abuse of human rights. The companies include the aforementioned Belo Sun as well as international and local groups such as Vale and Anglo American also from mining sector; agribusiness giants JBS, Cargill and Cosan/Raízen; while energy is represented by Eletronorte, Equatorial Energia Maranhão and Energisa Mato Grosso.

Tchenna Maso, Law Doctorate candidate at the Federal University of Paraná and researcher at EKOA, Socio-Environmental Laws Research and Extension, stressed that, “Environmental Rights are Collective Rights of every Brazilian citizen, the arrival of these foreign actors that hold no responsibility with the internal democratic process, moved solely by economic profits represents the destruction that can be seen in the country. These players don’t comprehend our social cultural reality, on the contrary, as such aspects are fragmented between social and environmental and in a quantified way," she tells the Media Co-op in Portuguese. "Nevertheless, the environmental damages in many cases are irreparable. Hence, through the practices of these groups and players exploiting the nature, to say the environment as a resource, leave to us the damage and the problems, which in the end is the best business in the whole world [for them]”.

Sarah Shenker, Campaigner at the British NGO Survival International, part of the global movement for tribal (also known as Indigenous) peoples, believes that while Belo Sun claims to bring development and progress, the reality is quite the opposite. After taking a deep breath during a Skype interview in Engligh, Shenker argued, “What these projects do is bring money to a few: to the companies and to the elite while they do not help financially or economically the local people. On the contrary, they destroy their lands and livelihoods, and threaten to wipe out whole uncontacted tribes. The Indigenous peoples are fighting for their land to be intact. The argument doesn’t hold up when talking about peoples’ lives. You can’t bring economic progress to a few at the cost of the lives of others.”

Last April, Belo Sun released a corporate statement claiming that that the Indigenous matter of the Environmental Impact Assessment (EIA) for their proposed gargantuan open-pit goldmine named Volta Grande, to be installed near the Xingu River in the Brazilian Amazon, was “successfully completed”. The Juruna Indigenous peoples have gone on record stating they were damaged by the Belo Monte Dam, which started operating in 2016, and are afraid of Belo Sun now.

The Canadian-Brazilian company document maintains that it has respected the protocols defined by FUNAI (the federal agency for Indigenous affairs) including the primary data collection and consultation with Indigenous communities. Belo Sun underwent a review by FUNAI that could allow the legal suspension of the installation license necessary to kick-starting the works. Nevertheless, its actions are in much dispute.

The Volta Grande do Xingu region is already affected by the Belo Monte Dam, and the environmental licensing noted that within six years of the start of the dam operations, no other companies would be allowed to impact the same area. Aiming to escape the IBAMA (Brazilian Institute of the Environment and Renewable Natural Resources) license that follows the beforementioned rule, the company sought licensing from the environmental agency sector of the Pará state Secretary for Environment and Sustainability.

Researcher Maso explains that the Pará state institution conceded the licensing in 2017, and the mining company claims that in those times there were no Indigenous lands in the region. “Public civil actions followed questioning the issue considering the acquisition of the lands from the INCRA (National Institute for Colonization and Agrarian Reform) while not consulting with Indigenous peoples from the Arara da Volta Grande do Xingu and Trincheira Bacajá lands as also the federalization of the licensing”, recalls Maso.

She asserts that despite the suspension of the licensing, there are reports of continuing gold mining in the area. “The National Agency for Mining (a federal autarchy tied to the Ministry of Mines and Energy) showed data confirming that in 2018 and 2019 there was still gold-digging from Belo Sun even without licensing”.

Maso states, “(Belo Sun) installed itself expelling the traditional gold-diggers from the region, harassing researchers and critics to the implementation of big mining in the area. There was a big opposition [from Belo Sun] to the few reports coming from a gold open-pit.”

The Indigenous communities in Brazil, especially in the Amazon region, are crying out to the world about the ordeals they have been facing in the last years. The Amnesty International points that Jair Bolsonaro’s anti-human rights speeches were put into practice through legislative and administrative measures by federal and state governments causing a severe crisis in the Amazon, a situation directly impacting Indigenous people, vis-a-vis attempting to damage the activities of civil society organizations as well as translating into threats of violence and murder aimed at human rights activists. The fires in the area affecting the populace, fauna, and flora also pointed to government mishandling.

But this line of strenuous abuses hail from years before Bolsonaro. During the government of Dilma Rousseff, the Kayapó community, led by the world famous Chief Raoni, endured distress caused by the building of the aforementioned Belo Monte Dam; later in the years of Michel Temer, Amnesty International’s Annual Report 2017-18 exposed that environmental activists felt abandoned as the institutions and the laws designed to shield them from aggressions perpetuated by the industry and agribusiness sectors were weakened. This happened while the country saw budget cuts and a change of political leanings which disrupted the National Program of Protection.

And Indigenous peoples' struggle with authorities didn’t begin this century. For example, during the dictatorship years (1964-1985) military airplanes showered napalm over Indigenous territories in the Amazon in an effort to wipe out the inhabitants and use the area to build roads. Bolsonaro is a staunch advocate of said regime.

850,000 Indigenous peoples distributed among 300 communities reside in Brazil, 13% of the country’s territory are Indigenous reservations, and 180 Indigenous communities call the rain forest home, a region that in total houses 24 million people.

From all the plant and animal species across the world, 10% can be found there, including approximately 40,000 species of plants, almost 1,300 different kinds of birds, 400 mammals and an insect population close to millions.

Lawyer and researcher Gonçalves asserts that the relations between the foreign players acting in the region and its populace are “unequal, where there is no possibility of isonomy (ie. ezuality before the law) between the parts. The business groups hold the technological knowledge to be implanted considering the risks and damage caused by the exploitation. They are not only approved by the government, but in fact are even supported. Not to mention the economic grasp.” For the scholar, extractive companies like Belo Sun attempt to subdue the locals by distributing information to them directly, and they are treated as a temporary aggrievance. “Once relocated, the problem is solved. They will cease to exist for said [exploiting] groups”.

Shenker concludes, “The image the Brazilian government has been subject to great international attention recently and not in a good way as it has been recognized by international media that President Bolsonaro is trying to put in place racist anti-Indigenous genocidal policies and basically waging war against the Indigenous peoples of Brazil.” In addition to other problems, Indigenous peoples are suffering the brunt of the Covid-19 pandemic in a nation country that, according to John Hopkins University has the second highest number of deaths and third most infections.