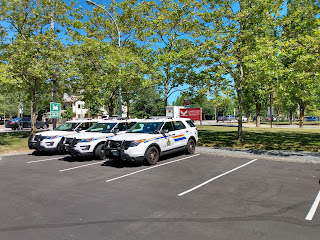 August was another deadly month in terms of police-involved deaths in so-called Canada. Nine people were killed by police or died through police actions.

At least four people were shot by police in August. There were at least two in-custody deaths. RCMP were involved in five of the deaths in August, with BC RCMP involved in three. Ontario Provincial Police (OPP) shot and killed two people.

Police in Repentigny, Quebec (near Montreal) shot Jean-René Junior Olivier, a 37-year-old Black man, several times, killing him, in the morning of August 1, 2021. His family reports that they had called police because they were concerned for his well-being and wanted help to get him to hospital because he was experiencing mental health distress.

The Independent Investigations Bureau (BEI) is investigating. They report that shortly after 7:30 AM, officers from the Police Department of the City of Repentigny responded to a 911 regarding “a confused and disorganized person” armed with a knife. Police and paramedics reportedly located the man along with another individual outside.

According to the BEI, police confronted the man who then fled on foot. Police pursued the man and deployed pepper spray against him before shooting him multiple times.

The BEI have assigned six investigators to examine the killing. They are not an independent agency and rely on other police forces for their investigations.

This appears to be another case where someone in distress is killed when police are sent instead of, or alongside, health care supports. It has not been reported how or why police engaged with the man rather than paramedics who were also on scene, though police often sideline paramedics.

A man fell to his death during a police action in his home in Coquitlam, British Columbia on August 1, 2021. The Independent Investigations Office (IIO) of BC is investigating. According to the IIO, RCMP claim that police responded to an incident involving a man at a residential building in the 1100-block of Heffley Crescent at around 3:20 AM. Officers entered the building and shortly after the man reportedly fell from an upper floor to the ground. He was pronounced dead at the scene.

No other information has been provided publicly, including why police were sent to the building in the first place or why the victim was targeted specifically.

A 34-year-old woman died in the RCMP custody in Tuktoyaktuk, NWT, on July 31, 2021. It is reported that the woman was taken into custody for public intoxication around 10:30 PM and died shortly after midnight. Several people die each year during intoxication arrests by Canadian police.

Police are investigating police in this case. The investigation into the death will be carried out by Calgary police.

The Independent Investigations Office of BC is investigating a police-involved death in Enderby, British Columbia, which occurred in the early morning of August 5, 2021. They report that according to the RCMP, police received a report just after midnight regarding a man allegedly assaulting two women with a weapon at a local campground. When officers located the man at approximately 2:00 AM, they used “tear gas and a 40mm less-lethal round” against him and “observed the man to be in medical distress.” First aid was reportedly offered “at approximately 3:00 AM,” around an hour after police located the man. At some point, Emergency Health Services arrived and the man was pronounced dead at the scene.

OPP officers shot and killed a woman in Burks Falls on August 5, 2021. According to the Special Investigations Unit (SIU), OPP officers responded to a Burks Falls, Ontario, residence at around 8:20 PM regarding “an unwanted person.” Two officers arrived and confronted a woman. Some type of interaction occurred and both officers discharged their pistols, striking and killing the woman.

No other details have been released at this time, including the nature of the interaction police engaged in when they confronted the woman before the shooting.

Alberta RCMP shot and killed a 39-year-old man near the Sunchild and O’Chiese First Nations in the morning of August 14, 2021. The Alberta Serious Incident Response Team (ASIRT) is investigating. They report that RCMP claim officers responded to a call regarding an armed man with a hostage in a rural area at around 12:21 AM. They also report that while officers were searching for the man, they were told by Edmonton police that he was a suspect in a suspicious death in the city.

When police found a person they believed to be the man in question, some sort of confrontation occurred and an officer fired their weapon, killing the man.

Significantly, it has since been determined that the man had not taken anyone hostage. He was alone when police killed him.

An OPP officer shot and killed a 31-year-old man in Fergus, Ontario, on August 15, 2021. The Special Investigations Unit is investigating the killing. They report that police were called about a domestic disturbance at about 11:00 AM, and around 1:30 PM officers and the man had “an interaction.” According to the SIU, police shot the man and he died at the scene.

The SIU were only notified of the death by police on August 31. No explanation has been provided for the three-day delay in reporting.

BC RCMP officers shot and killed a person in the early morning of August 31, 2021 in Quesnel. The Independent Investigations Office of BC is investigating. They report that police checked out a vehicle parked in a parking lot at the 400-block of Carson Avenue with one occupant apparently sleeping inside. According to the IIO, police claim that some type of interaction occurred between the individual and the officers and police fired shots striking the person who was transported to the local hospital where they were pronounced deceased.

Jeff Shantz is a long-time anti-authoritarian organizer and a professor at Kwantlen Polytechnic University in Vancouver.